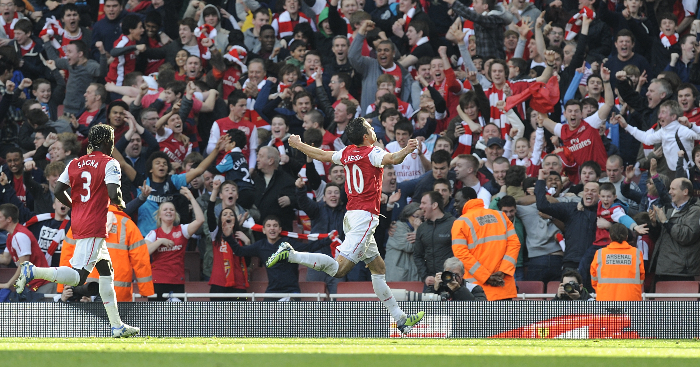 The bragging rights of North London will once again be settled this Sunday when Arsenal take on Tottenham in the Premier League. Naturally, both sides will be desperate to win.

The two teams are experiencing very different seasons. As things stand, Jose Mourinho’s men sit top of the table, while Mikel Arteta struggles to get a coherent tune out of the Gunners who currently occupy 14th place after 10 games.

But, as the old saying goes, form is irrelevant when it comes to such fierce local rivalries. How many times before have we seen Arsenal pull a top performance out of the hat when they face Spurs?

Here, we take a look back at their five best displays in North London derbies from the last ten years…

In a season where Spurs side reached the quarter-finals of the Champions League, this result was not to be sniffed at. Yes, it was only the League Cup, the poor relation of English football, but office bragging rights must be sought wherever possible.

Henri ‘Angela’ Lansbury netted his only goal for Arsenal, sliding in at the back post to convert a Kieran Gibbs cross, only for boyhood Spurs fan Robbie Keane to equalise from the bench five minutes into the second half.

A further half-hour was required, and this is where Arsene Wenger’s stalwarts showcased their quality. A brace of penalties from Samir Nasri put the game to bed with just six minutes of extra time played.

Andrei Arshavin, taking a break from shooting Compare the Meerkat adverts, burst forward to fire in the fourth and final goal, emphatically painting North London red in the process.

September 21st, 2010. Great pass from Eboué leads to an excellent crossing opportunity for Wilshire, and Lansbury finishes in a 4-1 win over Spurs. pic.twitter.com/RmZDHQqtGs

A scoreline that still manages to send shivers down the spine of many Tottenham fans.

While shooting yourself in the foot isn’t a new sensation for Spurs, this spanking came during the period where Tottenham briefly looked like becoming a third wheel in the Manchester dominated title race.

Harry Redknapp had developed a team of enigmatic entertainers, based around Gareth Bale, Luka Modric and Rafael van der Vaart, and they had smashed Newcastle 5-0 the game before. Redknapp himself was widely fancied to fill the vacant England manager’s seat.

Two first-half goals from Louis Saha and Emmanuel Adebayor suggested the game would go to recent form, but in 28 minutes either side of half-time, Wenger’s men ran amok.

A bullet header from Bacary Sagna got them back into proceedings before Robin van Persie continued his ludicrous form, curling in his 29th of the season from long-range.

A second-half strike from Tomas Rosicky was followed by a Theo Walcott effort, to take the tally to five.

Arsenal would finish the season by pipping Spurs to a Champions League place. The spirit and drive of that February afternoon has been so elusive at Arsenal recently, but the derby is the perfect occasion to kickstart an ailing season.

#OTD in 2012: Arsenal came back from 2-0 down to beat Spurs 5-2 with goals coming from Sagna, Van Persie, Rosický and Walcott (twice).

Any Arsenal babies conceived that night in February may well have been welcomed into the world with another walloping of Spurs.

What Adebayor had in stones, he lacked in marbles. A wild lunge at Santi Cazorla saw the striker sent off, sparking jubilation among the home crowd. From that point on, Andre Villas-Boas could only watch on like a helpless supply teacher as his side collapsed.

Per Mertesacker’s first Arsenal goal sparked the comeback, before Lukasz Podolski and Olivier Giroud put Wenger’s men in control at the break.

Cazorla and Walcott added two more in the second half, either side of Gareth Bale’s consolation, to ensure another emphatic local triumph.

By January 2014, Arsenal were desperate. Their matches were played to a backdrop of tiny violins as the club’s nine-year trophy drought became a source of existential angst for their supporters.

The FA Cup offered possible salvation, but the draw seemed unkind. 9,000 Tottenham fans packed into the Emirates with the expectation of another success. Despite losing Bale, Tottenham’s team contained new signing Christian Eriksen.

However, the pendulum of local power had swung Arsenal’s way. Their team was challenging at the top of the Premier League, playing the kind of football that leaves neutrals salivating. By comparison, Spurs were managed by Tim Sherwood and fielded Roberto Soldado upfront.

The following 90 minutes were so comfortable for Arsenal it was tempting to think they could have won in slippers. Goals from Santi Cazorla and Tomas Rosicky, the latter after a terrible error from Danny Rose, ensured a comfortable passage into the fourth round. Arsenal would go on to win the Cup that season, despite the best efforts of both Hull City and themselves in the final.

The enduring image from the night was Walcott reminding Tottenham fans of the score while being stretchered off. Yes, the injury would keep him out of that summer’s World Cup, but childish point-scoring should always take priority.

#OTD in 2014: Theo Walcott infuriates Spurs fans by mimicking the 2-0 scoreline with his fingers. pic.twitter.com/X6NnUb74nq

As 2018 drew to a close, it was natural to conclude that Tottenham were the premier football team in north London.

After Mauricio Pochettino took over after the Tim Sherwood Experiment, Spurs had been improving year on year. After stumbling upon Harry Kane, and adding the likes of Dele Alli and Son Heung-Min to their squad, hopes were high that prizes would be added to plaudits.

Arsenal couldn’t share quite the same optimism. Wenger had finally abdicated from the manager’s role after the 2017-18 season and Unai Emery had failed to fully impress. This Arsenal squad, while capable of beating anybody on their day, had been cast into Europa League purgatory.

The script was following convention when Kane put Spurs 2-1 up from the penalty spot, yet the blue touch paper for Arsenal’s comeback had already been lit.

Eric Dier, settling into his role of professional irritant, had sparked a melee with his celebration after equalising which his manager raced 40 yards to join. With the Emirates crowd baying, Arsenal eyes collectively narrowed – they would not roll over so easily this time.

The second-half was an Emery triumph. New talisman Pierre-Emerick Aubameyang lashed home a long-range leveller, before substitute Alexandre Lacazette made the Clock End erupt by putting Arsenal ahead late on. By the time Lucas Torreria scored a fourth, ripping his shirt off in celebration for the game’s stand-out moment, the place was positively delirious.

Tottenham may have gone on to reach the Champions League final, but their peak had already passed. With Unai Emery at the helm, and the tigerish Torreria patrolling midfield, it only seemed a matter of time before the good times at Arsenal were back.

Lucas Torreira's first Arsenal goal was a thriller. It gave us a confident 4-2 win against Spurs last season.#COYG pic.twitter.com/rprG8YJ6Sv