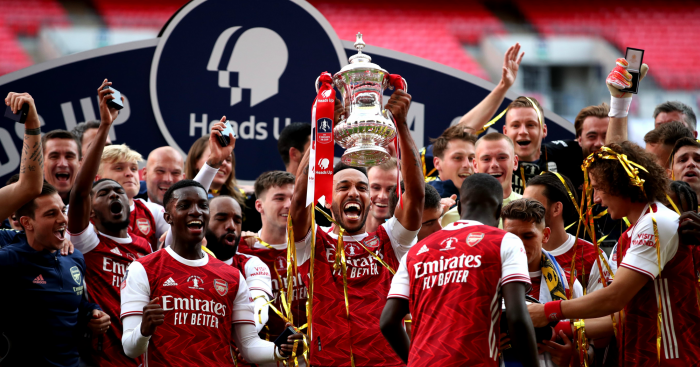 Arsenal fans may not be enjoying life right now, but they have form for getting big results against Chelsea.

While Chelsea have generally held the upper hand in recent years, the Gunners have been more than capable of giving their London rivals a bloody nose in one-off matches.

And we’ve selected five of the north Londoners’ best performances against the Blues from the past decade.

It’s easy to forget now, but Arsenal had a real chance of winning the league a decade ago.

Manchester United leant more towards steel than style, Manchester City were yet to get their act together, Liverpool were more concerned with avoiding relegation and champions Chelsea had suffered an Autumn slump.

Carlo Ancelotti’s team travelled to the Emirates unbeaten in their 11 previous meetings with Arsenal, but it was Arsene Wenger’s team who seized the day on a cool Yuletide evening.

After an even first half, Alex Song gave Arsenal the lead on the stroke of half-time after sliding a close-range finish past Petr Cech.

But the game was won by a quick-fire double salvo just after the restart. Firstly, Theo Walcott capitalised on a loose Michael Essien pass to tee up Cesc Fabregas before racing clear to add a third minutes after.

Celebrating Arsenal fans were treated to the spectacle of John Terry and Didier Drogba having a furious on-pitch argument, demonstrating how all their Christmases had truly come at once.

I want to see Arsenal that fights like van persie in this game. Arsenal 3-1 Chelsea, 2010 pic.twitter.com/XX2fCkbuXe

The day the footballing world united to laugh at John Terry. 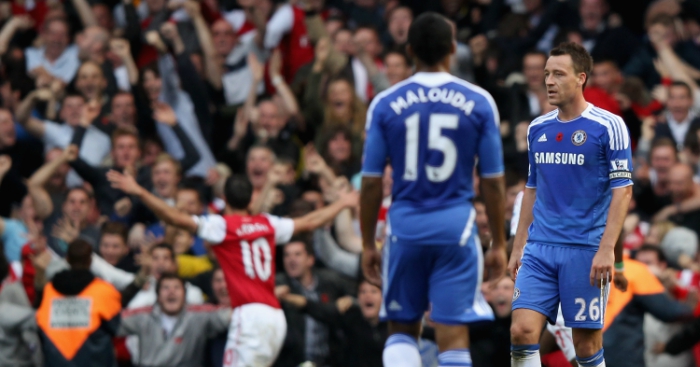 READ: John Terry, Robin van Persie and a slip which made lots of people happy

In the final decade of the Wenger years, where purgatory replaced progress, Arsenal were still capable of blowing away any opponent with performances of fantastical skill – and this was a prime example.

Neck and neck in the embryonic league table, by half-time of this encounter, Chelsea were pinned on the floor with their arm behind their back crying for mercy.

Alexis Sanchez, in the era before his Duracell batteries ran out, took advantage of a Gary Cahill error to race clear and start the rout. Three minutes later, Walcott converted a Hector Bellerin centre to double their advantage.

Skill, speed and ruthlessness were the buzzwords around the Emirates as Mesut Ozil tore away from N’Golo Kante to steer home Arsenal’s third and seal the game.

It was a breathtaking demonstration of what Wenger’s team were capable of, yet it proved the catalyst for Antonio Conte to switch to the 3-4-3 formation that inspired Chelsea to regroup and win the title that season.

Chelsea’s domination of the league in 2016-17, where a 13-match winning run saw them sprint ahead of their competitors, ensured confidence was high heading into that year’s FA Cup Final.

After seeing off Tottenham in a classic semi-final, Antonio Conte’s champions were firm favourites to see off Arsenal in the Wembley showpiece. Arsenal had just finished outside the Champions League places for the first time under Wenger and, more embarrassingly, miles behind Spurs too.

Never write off Arsenal in the FA Cup. In the best final since Steven Gerrard against West Ham in 2006, the Gunners took the game to their opponents, who appeared to have expected a stroll in the May sunshine.

Sanchez gave them the lead in the fourth minute, turning the ball home after referee Anthony Taylor had overruled his assistant who’d flagged for offside against Aaron Ramsey.

With Per Mertesacker and Rob Holding managing to keep Diego Costa subdued, Arsenal began to strut their stuff and another effort was hooked off the line.

When Victor Moses was sent off for diving, Arsenal fans must have sensed it would be their day. A Costa equaliser 14 minutes from time failed to dampen their spirits and Ramsey headed home a classic Giroud cross to win Wenger’s last prize as Arsenal boss.

Remember when Arsenal met Chelsea in the 2017 #FACupFinal?pic.twitter.com/utt6Zy5Ili

Three years later, the same final and the same result.

But much was different. Most obviously, the coronavirus pandemic ensured no fans were in attendance.

Both teams had changed too. A young Chelsea team, marshalled by Frank Lampard, had scraped into fourth place and fancied their chances against an Arsenal side that barely finished in the top half.

Yet Mikel Arteta had shown he was fully capable of engineering results against superior teams, not least in the semi-final win over Manchester City. Arsenal also possessed the best player on the pitch in Pierre-Emerick Aubameyang.

Aubameyang proved the difference. A penalty and a classy chipped finish saw Arsenal come from behind to seal an unlikely victory.

Chelsea were apoplectic about the refereeing performance of Anthony Taylor, who sent Mateo Kovacic from the field, but could have no complaints with the final score.

The teams haven’t met since, so perhaps Chelsea are the perfect opponents to restart Arsenal’s flatlining season.

"Ah, Zou…" 😱#ListenIn to the moment Jorginho knew Chelsea were in trouble.