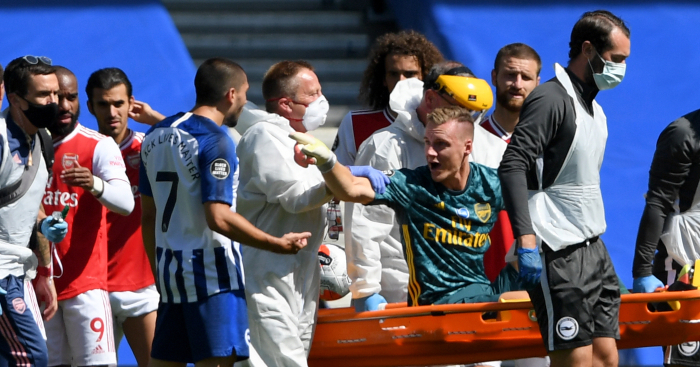 Search Google for ‘Arsenal injury curse’ and on the first page you’ll find an article dating back to 2010. This is not a new thing.

Arsenal’s wretched luck with injuries blighted the careers of Jack Wilshere, Danny Welbeck and Santi Cazorla among many others in recent years; go back slightly further and Eduardo and Abou Diaby provide further sad stories.

As the following examples show, their fortunes do not appear to be changing any time soon.

In 2017-18, while on loan at NAC Breda from Manchester City, Mari missed just three games all season, two of which were due to injury and one was due to suspension.

In 2018-19, while on loan at Deportivo, Mari played in 37 of their 42 league fixtures, missing out on the matchday squad just three times, one of which was due to suspension.

After joining Flamengo on a permanent deal, Mari failed to make a matchday squad for six out 38 matches, one of which was due to suspension.

Having played 204 minutes for Arsenal, Mari will miss the rest of the season and possibly the start of next after being ruled out for up to three months.

Since then, Arsenal have signed him on a permanent deal, so he should probably get used to that feeling.

Pablo Marí made his debut in 2010. Since then, he has only missed 9 games through injury.

He played a grand total of 204 minutes for Arsenal Football Club before sustaining an injury that will force him to miss the remainder of the season at the very least.

Arsenal fans have been calling for the introduction of Martinelli after the forward failed to make it off the bench in either of their two games since football resumed.

Just as the Brazilian was tipped to be given a chance by Mikel Arteta, an injury suffered in training means he is set for “months” on the sideline.

“We had some really bad news in training again yesterday,” Mikel Arteta said on Tuesday. “The last action he [Martinelli] got hit by another player and he has damaged his knee.

“The doctors are assessing the extent of the injury, but it is not looking good at all.”

The last action of training? When you’re luck’s out…

While Arsenal have been given something of a positive boost by the news Leno’s injury following a clash with Brighton’s Neal Maupay is not as serious as first feared, the loss of the goalkeeper still serves as an example of just how unlucky they have been with injuries.

According to Transfermarkt, Leno hasn’t missed a game through injury since November 2012. Indeed, in his final five seasons at Bayer Leverkusen prior to joining the Gunners, Leno missed just four games.

Thank you for your support and getting well wishes. I’m going to work hard to come back on the pitch as soon as possible 💪🏽😃 #COYG pic.twitter.com/fwGFM8mo4W

Tierney developed into one of the most exciting young players in Europe with his performances for Celtic, but his debut season at Arsenal has been riddled with injuries, restricting the left-back to just 14 appearances in all competitions.

The 23-year-old missed the start of the season with a hip injury and then missed another large chunk of the campaign with a dislocated shoulder.

Given Tierney also missed stretches of last season with hip and groin injuries, Arsenal were incredibly brave to think the Scotland international would avoid their curse.

Speaking of signing players already injured, Soares is yet to appear for Arsenal after joining on loan from Southampton in January while still struggling with a knee injury.

That hasn’t stopped the Gunners agreeing a long-term deal to sign the right-back. Have they not learned anything from Kim Kallstrom?

In his two seasons in Sampdoria’s first team, not once did Torreira miss a game through injury as he built up a burgeoning reputation that earned him the move to the Premier League in the summer of 2018.

The midfielder had to be eased into his debut campaign with the Gunners as he recovered from the World Cup, but he has failed to return from the ankle injury that saw him miss Arsenal’s final game before football’s postponement and is still a few weeks away.

We generally feel quite sorry for Chambers, who it is easy to forget became an England international while still a teenager at a time when his career only appeared to be heading in one direction.

Since then he has struggled to establish himself at Arsenal and suffered two relegations while on loan at Middlesbrough and Fulham.

At Fulham, he was a rare positive in a dismal season at Craven Cottage and failed to make a matchday squad for just three league fixtures aside from the two games against his parent club in which he was ineligible.

He returned to Arsenal for 2019-20 and was beginning to impress when, bang: ruptured knee ligaments and six to nine months on the sidelines.

Arsenal, you truly are cursed.