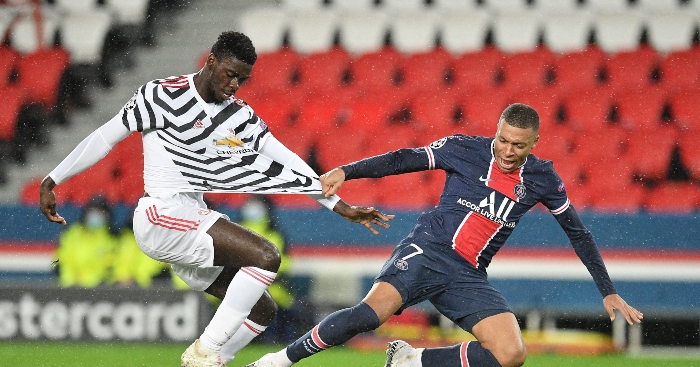 While Marcus Rashford’s late goal stole the headlines, Manchester United‘s Axel Tuanzebe was imperious at the back in their 2-1 win against PSG.

Tuanzebe, who came through the United academy, was making his first start in 10 months and showed incredible acceleration to deal with Kylian Mbappe.

Playing the full 90 minutes on the right side of a back three, the 22-year-old made seven clearances – the most of any player on the pitch.

“Axel did fantastic, he’s been out for 10 months so to put in a performance like this against Neymar and Mbappe almost surprised us as well,” Ole Gunnar Solskjaer said after the game. “We know he’s a good player, but to do it on a night like this is fantastic.”

We’ve also rounded up a number of tweets from United fans that are already getting excited by the promising defender.

Tuanzebe not played for a year comes in like a prime Rio against 3 of the best forwards in the world. Always in control, never going to ground, some player him if he can stay fit

Axel Tuanzebe has not played for United for nearly a year and went to Paris and pocketed Kylian Mbappe. What an incredibly inspired performance. That’s our centre back.

Axel Tuanzebe is the best centreback at #MUFC. He proved that tonight. He dealt with Neymar and Mbappe with ruthless defending, matching them for smarts & pace. A complete performance by Axel. #PSGMUN