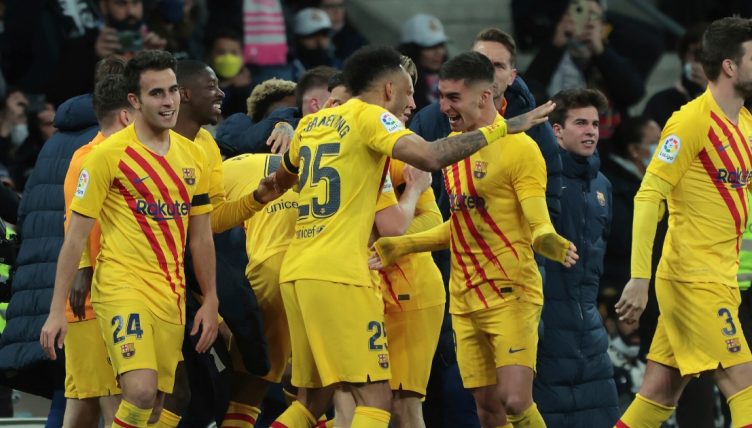 Real Madrid headed into El Clasico with one hand already on the La Liga title, but Barcelona inflicted misery on Carlo Ancelotti’s side at the Bernabeu as they romped to a 4-0 victory.

Barcelona arrived in Madrid 15 points adrift of the league leaders who were in a rich vein of form – unbeaten in their previous eight outings in the Spanish top flight. But this mattered little against Xavi Hernandez’s men.

Fresh off the back of securing progression into the quarter-finals of the Europa League in midweek, the Catalans delivered a performance for the ages masterminded by the club’s idolised Spanish boss.

Pierre Emerick Aubameyang continued his red-hot form since his January arrival from Arsenal to fire Barca ahead in the first half. Three further goals in the second period, from Ronald Araujo, Ferran Torres and another Aubameyang finish, rounded off a comprehensive result in one of Europe’s glamour fixtures.

Here are 10 impressive stats and records from Barca’s extraordinary win in the Spanish capital:

– Barcelona have now won by a +4 goal margin six times in the history of El Clasico on away soil. In contrast, Madrid have only done this once.

– This was Barca’s 32nd away victory in El Clasico compared to Madrid’s 29.

– Germany international Marc-Andre Ter Stegen has now kept five clean sheets in El Clasico since his arrival at the Catalans from Borussia Monchengladbach in 2014. This means he’s just two short of the all-time record in the fixture, currently held by Victor Valdes.

– Pierre Emerick-Aubameyang is the first player in the 21st century to score in each game he’s played against Madrid. His decisive brace means the 32-year-old has scored seven in five matches against the Spanish giants – the other appearances came for Borussia Dortmund in the Champions League.

– The scoreline didn’t overly flatter Barca: 2.96xG to 0.85xG for Madrid. It was an excellent attacking showing on away turf.

– Madrid have failed to score in three of their last ten matches. Karim Benzema didn’t feature in any of these games. The France international is irreplaceable, as he showed to essentially single-handedly send Los Blancos through to the Champions League quarter-finals (via WhoScored.com).

– Eden Hazard was an unused substitute for Madrid meaning he’s yet to face Barca in the seven meetings between the two sides since his arrival from Chelsea in 2019. He faced the Catalans for the Premier League club twice.

– In Pep Guardiola’s first away El Clasico as Barcelona coach, he won by a four-goal margin. Xavi has now repeated this feat 13 years on. If the former Spain international can replicate some of Guardiola’s other achievements at Barca, he’ll be quite the manager…