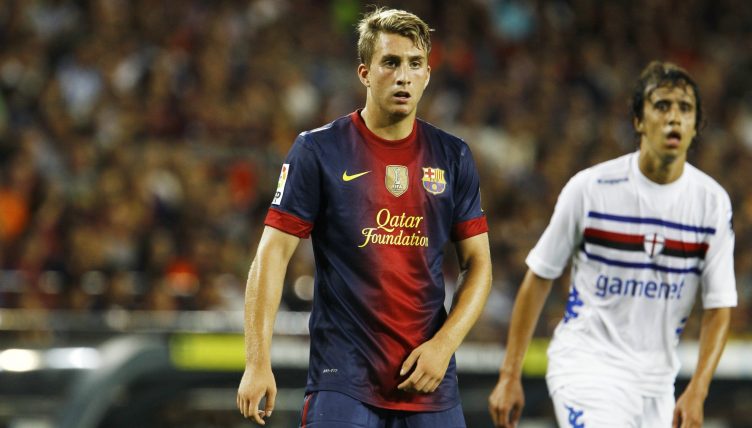 When Football Manager 2013 was released back in November 2012, Barcelona’s La Masia academy was at the height of its prestige.

Earlier that year, Pep Guardiola had fielded an entire XI of academy graduates. The likes of Xavi, Sergio Busquets and Gerard Pique played vital roles in Barcelona conquering the world, and there was a clamour to see who the next big things to emerge from the club would be.

Guardiola left Barcelona in the summer of 2012 and his former assistant Tito Vilanova was tasked with getting La Blaugrana back on their perch after Jose Mourinho’s Real Madrid beat them to the La Liga title with a hundred-point tally. They had no shortage of promising youth prospects emerging to help bolster the first-team squad.

FM 2013 earmarked no fewer than 15 wonderkids at Barcelona that year (via FM Scout). A fair few of them have gone on to enjoy decent top-level careers, but this list is testament that you can’t produce once-in-a-generation talents like Xavi, Busquets and Pique every year.

The local-born centre-back clocked up nearly a century of appearances for Barca B between 2009 and 2014, but his only appearance for the first team was a 3-1 defeat to Sevilla in the 2010 Super Cup (Guardiola’s men went on to overturn the result with a 4-0 victory in the second leg).

Gomez left the club in 2014 and has gone on to forge a respectable career in Spain. He made over a hundred appearances for Celta Vigo, played a role on the fringes as Sevilla won the Europa League in 2019-20, and is now back in Catalonia, turning out for Barca’s city rivals Espanyol.

Another that featured prominently as a youngster for Barcelona’s B Team without ever making it past the periphery of the senior set-up, Muniesa has enjoyed a half-decent career since leaving his boyhood club in 2013.

Premier League viewers may remember his five-year stint at Stoke City. He left the Potters in 2018 and is now turning out for Saudi Arabian outfit Al-Arabi.

A centre-back called Ayala? Sounds promising. Unfortunately, young Sergio didn’t quite have the ability of his Argentinian namesake. He left Barcelona in 2014 without ever making an appearance.

Like Roberto, Ayala represented Valencia – but only the B Team, never quite showing enough for top-tier football. Still, he’s earned a living out of the game in the lower divisions of Spain, and after moving around a bit is now turning out for third-tier San Fernando CF.

Having been named in the Team of the Tournament as a part of Spain side that won the Under-19 Euros in 2012, Grimaldo was talked up as being a prospect capable of challenging Jordi Alba.

But the left-back only ever received opportunities for Barca B. Eventually he left in search of first-team opportunities, joining Benfica in December 2016. Six years, three Portuguese titles and over 250 appearances later, he remains at the Estadio da Luz and regularly catches the eye for the Eagles in the Champions League.

Often linked with a move to major European clubs, it’s something of a head-scratcher how the 27-year-old remains uncapped by Spain – although maybe not a total mystery, when you consider who the La Roja manager is.

“[Luis Enrique] has never spoken to me. I haven’t had any contact with him, nor do I have anything to say to him,” Grimaldo said back in 2015.

What a strike from Benfica's Álex Grimaldo last night! 🤤

No stopping that! 💥#UCL pic.twitter.com/queUC7qLbO

Born and raised in Guinea-Bissau before moving to Portugal and developing at Sporting Lisbon’s academy, Barcelona nabbed the highly-rated prospect back in 2012.

The versatile defender continued his progress in the B team, making one Copa del Rey appearance for the Blaugrana back in 2014, before departing for pastures new.

After stints with Villarreal, Belenenses and Lille, he’s currently a free agent after being released by Trabzonspor. He made 17 Super Lig appearances as Trabzonspor won the Turkish title last term, but his season was cruelly cut short after suffering an anterior cruciate ligament injury in December.

Ca joined Barcelona from Sporting’s academy alongside Edgar Le in 2012.

He spent four years on the books, making a handful of B-Team appearances amid loans away, before signing for Lithuanian outfit Stumbras in 2017. Nowadays he’s back in Portugal, turning out for lower-league side Vitoria de Sernache.

Some believed the La Masia graduate to be the future of Barcelona’s midfield, but he suffered with injuries and never quite kicked on and broke through, despite making over a hundred appearances for the B Team.

He left the club in 2019 and since then has been turning out alongside Andres Iniesta at Vissel Kobe.

“Andres was key, he called me many times and told me it was a good club to grow at, and Gerard was the one who told me the news so I’m very grateful to him for that,’ Samper said upon joining.

“Andres has told me that Kobe want to play like Barca and that their style of play will suit me and I’ll be able to enjoy myself.”

READ: Where are they now? The 8 Barca kids given debuts by Luis Enrique

The one player on this list to really make it at Barcelona.

Roberto’s versatility has seen him make over 300 appearances for the club. He’s won six La Liga titles and six Copa del Rey, as well as two Champions Leagues – although he was very much on the fringes of honours won under Guardiola, with regular matches only coming from 2013-14 onwards.

We’d be amazed if he ever tops this moment.

Another that made over a hundred appearances for Barcelona B without ever actually appearing for the first team. Ouch.

A strange back-and-forth career saw Deulofeu feature for Barcelona in different stints, with convoluted loans and buy-back schemes never seeing him quite settled anywhere until his mid-to-late 20s.

Best known for intermittently turning on the magic in the Premier League with Everton and Watford, Deulofeu is now turning out for the Pozzo’s sister club Udinese. He’s now into his third season at the Stadio Friuli – his longest continuous spell at any club.

He’s been key to the Bianconeri punching above their weight this season to sit eighth in Serie A.

Gerard Deulofeu brings Udinese back into the game with a wonderful free-kick ✨ pic.twitter.com/t8fgO01xLV

The winger scored a respectable tally of 11 goals in 59 appearances for Barcelona between 2011 and 2017, without ever quite looking like he had the quality necessary to stake a place in their best XI.

Tello subsequently went on to spend a settled five-year spell at Real Betis, and in August he arrived at Los Angeles FC along with fellow La Liga stalwart Gareth Bale.

Having joined Barcelona as an 11-year-old, Miguel Angel never quite made it at senior level, not even at Barca B.

The winger left for Reggina in 2013 and has spent the past nine years in the lower reaches of the Italian football pyramid. He’s currently turning out for Serie C side Audace Cerignola.

Younger brother of Thiago Alcantara, Rafinha stuck around at Barcelona a lot longer. His talents have seen him go on to represent Brazil like his World Cup-winning father Mazinho, unlike Spain international Thiago.

Rafinha won Olympic Gold with the Selecao in 2016 and was on the fringes of Barcelona’s squad as they won a raft of silverware between 2011 and 2020. But injuries curtailed his career and he hailed to kick on at PSG. The 29-year-old spent last season back in La Liga on loan at Real Sociedad and has since joined Qatari side Al-Arabi.

Not a La Masia graduate and never actually owned outright by Barcelona, Luis Alberto spent the 2012-13 season on loan with the B team on loan from boyhood club Sevilla.

After his one season in Catalonia, Liverpool bought him for a £6million fee, but he never made the grade at Anfield. He’s since found a home at Lazio, and has made over 200 appearances for the Biancocelesti.

Here he is scoring an absolute peach after getting set up by fellow Barca old boy Pedro.

Luis Alberto absolutely drills the ball high into the net for Lazio.

The sound that made! 🤤 pic.twitter.com/GfhBpKk4eL

The Cameroonian arrived as a 13-year-old at Barcelona through Samuel Eto’o’s foundation back in 2008.

He since broke through to the star for the B team and made three appearances for the first team in 2013-14, scoring once.

Dongou has since spent the majority of his career in the lower reaches of the Spanish football pyramid and is now at Greek second-tier side Anagennisi Karditsa.