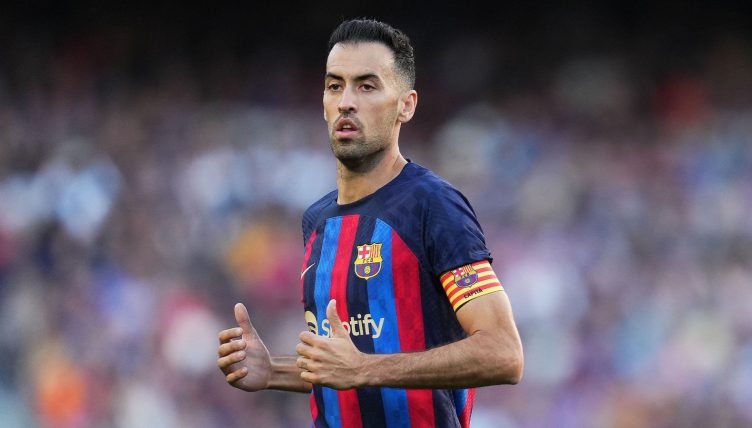 After their summer spending spree, Barcelona will be keen to cut down on their wage bill and so several of their out-of-contract players could depart on a free transfer.

After a turbulent few months, which saw Barcelona crash out of the Champions League, Xavi now has his side back on track as they currently top La Liga with 41 points.

We’ve further looked into their squad and picked out the seven players who could leave on a free transfer in the summer if their contracts aren’t renewed.

The legendary Spanish midfielder still remains to be an important cog in the Xavi system. Despite his advancing years somewhat slowing him down, Busquets’ mind and eye for a pass are as sharp as ever.

The 34-year-old has admirers in the USA and Saudi Arabia, although Barcelona could yet convince him to stick around. “He has a contract until June and then we will see,” Xavi told reporters.

“It’s more a personal feeling of his, how he sees himself in the team. For me, he is fundamental. It will depend on him, more than on the club and me, but we will try to convince him.”

Given Barcelona’s summer additions, it was somewhat of a surprise that Depay didn’t move on in the last summer transfer window. Having only started two La Liga matches all season, he is now seeking his next challenge.

The Dutch forward has been linked with a Premier League return, although as things stand he looks more likely to sign for Atletico Madrid.

If you need us, we'll be watching replays of Memphis Depay's goal all day 🤤

Upon joining Barcelona in the summer Alonso reportedly had to take a dramatic wage reduction in order to keep Barcelona within La Liga’s wage limit.

The Spanish defender has been used as a makeshift centre-half at times when the likes of Andreas Christensen and Ronald Araujo have been out injured. Fresh reports claim that he could soon be offered a new deal with the club.

The former Arsenal full-back was signed on a similarly short-term contract to fill a gap in the summer. Since his arrival, the full-back has only featured in a handful of matches and has mostly played a squad role.

In an interview with the Spanish outlet Ara, he confirmed that his annual salary is less than €500,000. He told the newspaper: “Today, what worries me is playing football at the highest level.

“I am lucky that I have been doing it for many years and I am in a financially comfortable situation that allows me to enjoy what I want. In the end, we don’t need as much as we think and I live a very normal life. My priorities are not based on an economic issue.”

The defender told Sport: “I am convinced that 2023 will be a totally different year for me and that injuries will be forgotten. I am at 100%. You can always improve, but I am sure that in this second stretch of the season, I will be better than ever.”

Roberto has spent his entire career with Barcelona but is yet to strike a deal with the club. If he does end up leaving, we’ll always treasure this moment against PSG.

Pena is highly regarded at Barcelona and is the backup goalkeeper to Marc-André ter Stegen. The 23-year-old looks likely to pen a new deal with the club which will keep him in Barcelona for the foreseeable future.

The Spanish shot-stopper also looks more than likely to extend his stay with Barcelona. The 21-year-old is yet to make a first-team appearance for the club as he has spent his career so far with Barcelona B.

READ NEXT: Where are they now? The 14 Barca kids given debuts by Pep Guardiola