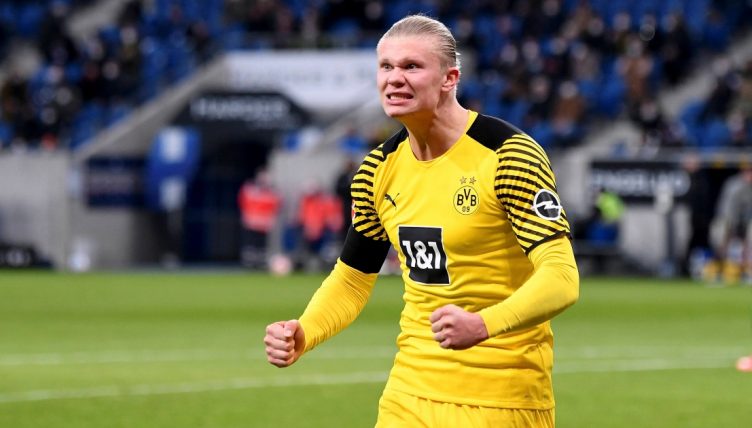 Barcelona, Real Madrid and Manchester City are all said to be hoping to sign Erling Haaland from Borussia Dortmund this summer – but where will he end up?

Haaland remains contracted to the Bundesliga club until 2024, but it looks increasingly like the massively in-demand striker will push to leave this summer.

Dortmund have fallen away in the Bundesliga title race and failed to qualify for the Champions League knockout stages. Reports suggest that the 21-year-old Norway international – one of the most prolific youngsters in the history of football – will look for a club that can compete for the biggest honours.

The gossip columns have nailed down Haaland’s potential destination to three clubs – Premier League champions Manchester City, whom his father used to play for, and historic La Liga giants Real Madrid and Barcelona.

Here are all the most telling quotes from the man himself, his representatives, key figures at Dortmund and his potential suitors.

“The last six months, I have chosen not to say anything out of respect for Dortmund,” Haaland told Viaplay back in January.

“But now the club has started to pressure me into making a decision, but all I want to do is to play football.

“I have said from the beginning that I want to focus on football because that is when I am at my best, not when other things come into my mind. Now they have put pressure for a while. So it is time to get things started.

“All I want to do is to play football, but I can’t do that now.”

Zorc has responded to Haaland’s comments by insisting Dortmund are yet to open talks with the player, leaving them confused by his recent claim.

“There is currently no deadline, no deadlines, and there have not even been any discussions.

“But that we want and have to have talks at some point is clear, understandable and only professional.”

“I was a bit surprised by his comments,” Kehl, who will succeed Zorc as sporting director in the summer, told German station Sport1 Doppelpass.

“In the next few days, I’ll talk to him about what’s on his mind right now and why, after a 5-1 win, he came up with this topic and spoke so strongly about pressure.

“There is no ultimatum, there is no deadline. We’re not putting him under pressure to make a decision in the next few weeks. But because he is so important to us, there has to be planning security for us at a certain point.

“How am I supposed to push ahead with my squad planning, how can we replace an Erling Haaland, if we don’t get a sense of whether the player still wants to stay at Borussia Dortmund or not?”

“With Erling, everything is on the table internally – everyone is honest with each other. Haaland will make a decision at some point – the club will prepare well for it,” the Dortmund manager told Bild in February 2022.

“It has no impact on me because I can’t stop Mino Raiola and Alfie Haaland from travelling,” former interim manager Edin Terzic told reporters when the striker and his agent were reportedly touring Europe talking to potential suitors in February 2021.

“It’s up to them, they’re grown-ups and they can choose whatever they want to do.

“I just can have an impact on Erling and we are happy to have him in our team.”

“We were linked to more than 100 teams, but it is true that La Liga would be a very good league for my son, with great teams,” Erling’s father and representative said (via Goal) shortly after the striker joined Dortmund back in February 2020.

“You never know if he will play in Spain. What has to happen, will happen.”

“He will take the next step. Bayern (Munich), Real (Madrid), Barca, (Manchester) City – these are the big clubs he can go to,” Haaland’s outspoken agent said, via Sport1 journalist Patrick Berger, in January.

“In general, there will not be big transfers this summer,” Perez told El Larguero in April 2021, shortly after the collapse of the European Super League proposals.

“When money does not flow from the rich clubs to the poor clubs, everyone suffers.

“It’s impossible to make signings like Mbappe and Haaland, in general, not just for Real Madrid, without the Super League.”

Indeed, Los Blancos actually made a considerable net profit last summer, signing David Alaba on a free and Eduardo Camavinga for £29million while bringing in funds from the sales of Raphael Varane and Martin Odegaard. It remains to be seen whether they’ll splash the cash more this summer.

“I can’t disclose details, but I can only say that we are working for the present the future of the club,” Xavi told reporters in March 2022. “I can’t say any more, when I can we will be the first to say it. For example, yesterday we announced Pablo Torre’s arrival.

“But, in this situation [regarding Haaland], I have nothing to say and nothing to announce, only that we are working for the good of the club, for the future and the present.

“The most important thing is that I have not seen a single player who has said ‘no’ to Barcelona. Of course there are different circumstances, but it makes all the players feel excited at the idea of joining.”

Back at the turn of the year, Barcelona’s president was bullish about the prospect of the club competing to sign the world’s biggest names – despite their recent financial struggles.

“We continue to be a benchmark,” Laporta told reporters in a press conference.

“And we have returned, wanting to do very well. It is what we do every day, so that Barca regains the specific weight and status that it must have.

“Ferran [Torres] is proof of this. He shows that Barca continues to be a reference for the top players. The resurgence is a reality and the market has noticed it.”

However, he has since pedalled those comments back a little – at least specifically about Haaland.

“There has been no type of negotiation [with Haaland],” Laporta said, via a report in Marca.

“At Barcelona we don’t negotiate directly with the player. When we have to negotiate, we will do it with Borussia Dortmund, if the circumstance arises.”

“We need a striker and I think the club is going to try,” Guardiola said before Manchester City’s victory over Manchester United in March 2022.

“City will be favourites to get Haaland if he does choose to come to England but I’ve heard he wants to go to Spain,” Robinson told Football Insider‘s Dylan Childs what his sources in the game have told him.

“He wants Real Madrid I think, or Barcelona. I’m pretty sure that will be his preferred destination ahead of the Premier League.

“At some point I can see him playing in the Premier League but I think a move to one of the big Spanish clubs is more likely this summer.”

Twitter’s king of transfers has spoken extensively about Haaland’s next destination – but he isn’t hedging his bets just yet.

“I can’t really predict this one, I’m told that Haaland is really tempted to play in La Liga,” Romano said, via @MadridXtra.