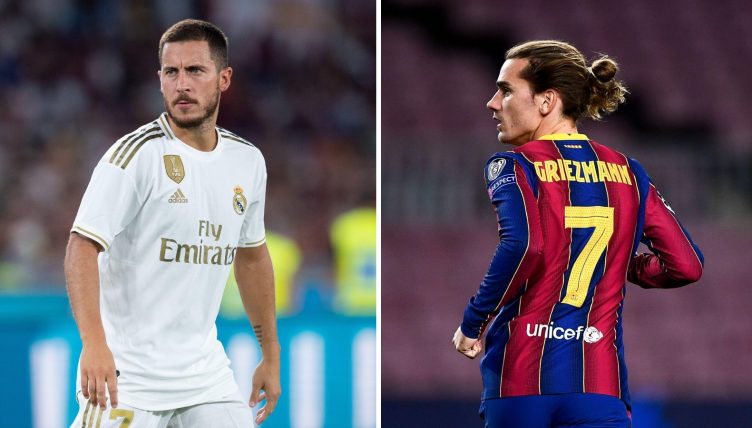 Real Madrid and Barcelona have given lessons in how to – and how not to – spend money in recent years.

Barcelona dominated the landscape of Spanish football ever since Pep Guardiola was appointed their manager 14 years ago. Between 2008 and 2019, they never went two years without lifting the La Liga title. They won the league in eight of 11 seasons, a period in which historic rivals Madrid only won two.

But things began to go awry when PSG activated Neymar’s €222million release clause in the summer of 2017. Ernesto Valverde did well to steady the ship and lead the Catalan club to back-to-back titles after that, but the wheels gradually fell off the wagon with a series of high-profile transfer blunders.

The Neymar money was not reinvested wisely, with the likes of Philippe Coutinho and Antoine Griezmann struggling to live up to their price tags before being sold for a tiny fraction of what they were originally bought for.

That led to the ousting of club president Josep Maria Bartomeu, who leaves a scorched earth legacy at the Camp Nou. Yet successor Joan Laporta has refused to respond with an austere transfer strategy, instead pulling a series of economic levers to rebuild the squad with an ethos of spending even more to dig the club out of the hole they’re in.

Xavi has led Barcelona back to the summit of La Liga ahead of the World Cup, but it remains to be seen whether this strategy will pay off. The club have failed to win the title in each of the last three years and have been eliminated from the Champions League in two successive campaigns.

Real Madrid, meanwhile, have won two of the last three titles and are gunning to retain the La Liga trophy for the first time since 2008. They’ve also dominated Europe like no other side in the modern era, having won the Champions League for the fifth time in nine years last season.

While their recruitment has been by no means perfect – club record signing Eden Hazard has failed to light up the Bernabeu – they’ve done well to cash in on assets like Cristiano Ronaldo, Raphael Varane and Casemiro, rebuilding the squad with younger signings in the process.

But how do the two La Liga giants compare when it comes to their transfer spending in recent years? We’ve gone back over the period that includes the last five summer transfer windows – starting in the summer of 2018, up to the most recent transfers of 2022 – to see how they stack up against one another.

Madrid have clearly spent more wisely in recent years, investing less in total terms, yet still raising plenty in player sales, resulting in a net spend that’s less than half of Barcelona’s since 2018 – all the while enjoying more on-pitch success.

TRY A QUIZ: Can you name every player to score in El Clasico in the 2010s?