Best yet under Xavi? Seven amazing stats from Barcelona’s win vs Napoli 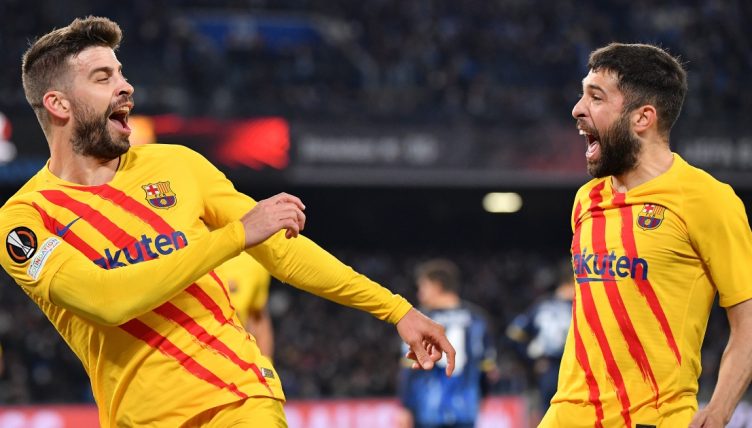 Barcelona may not want to be in the Europa League – but their crushing 4-2 victory against Napoli suggests that the Spanish giants are making the best of the situation.

After their humiliating group-stage exit from the Champions League, Xavi moved to strengthen his squad with the January signings of Premier League trio Adama Traore, Pierre-Emerick Aubameyang and Ferran Torres.

While their priority is qualifying for the Champions League next season, Barcelona will be eager to win European silverware this season but were given a tough draw against Napoli in the play-off round.

And, after a 1-1 draw in the Camp Nou, Barca tore into their Serie A opponents in the Diego Maradona Stadium. Goals from Jordi Alba, Frenkie de Jong, Gerard Pique and Aubameyang were enough to seal an impressive win.

Coupled with recent wins over Atletico Madrid and Valencia, there’s a sense that things are starting to come together at the Camp Nou. We’ve collected seven amazing stats from Xavi’s latest statement victory that illustrate just that.

– Adama Traore has more assists in his first five appearances for Barcelona (4) than he managed in his last 73 Wolves games. Talk about making an impact…

– But the Man of the Match was unquestionably Frenkie de Jong. Scorer of a fabulous goal, De Jong also made Barca’s fourth with a jaw-dropping dummy. He also completed 71/76 passes (93% success) while creating 3 chances. The Diego Maradona Stadium was his playground.

– Despite the exploits of Barcelona’s new forwards, a club veteran has also made a massive contribution to the recent upturn. Jordi Alba, who’s played for the club since 2012, has either scored or assisted in four of his last five Barca appearances.

– Barcelona have been in brilliant goalscoring form over recent weeks. For the third time in five matches, Xavi’s side scored three in the first half of a match with Napoli joining Atletico Madrid and Valencia in not being able to stop the rampant Catalans.

An impressive away win for Barca and Xavi's impact is clear to see!#UEL pic.twitter.com/sCTXYE7EoL

– They’ve scored four or more goals in back-to-back away games for the first time since March and April 2019.

– And it was the first time Barcelona have scored four or more times in a European away game since their Champions League victory over Wisla Krakow in August 2001 – a game Xavi himself played in.

– Their victory in Naples was Barcelona’s first win in the Europa League since a 2-1 victory in the Round of 32 against Danish side Brondby back in 2004 – when the competition was known as the UEFA Cup.