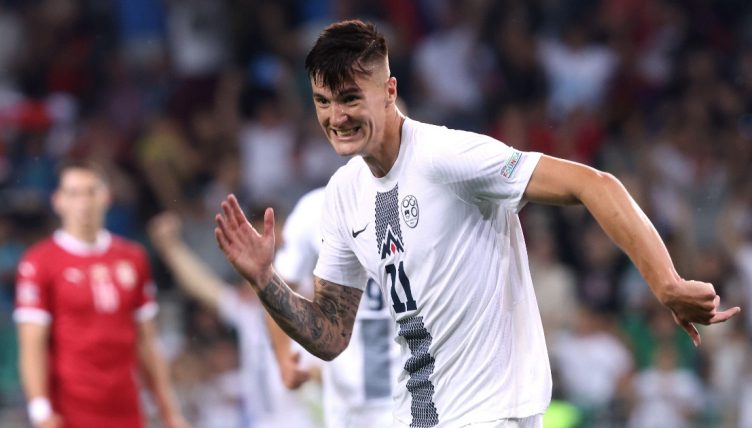 United’s squad has been bolstered by the arrivals of Tyrell Malacia, Lisandro Martinez and Christian Eriksen, but it sounds like they’ve not done all their business yet.

Plying his trade in Austria, Sesko is a name that will be unfamiliar to many. With all that in mind, here’s everything you need to know about the player United are reportedly keen on signing.

Born in May 2003 – 21 Questions by 50 Cent was No.1 in the charts, fact fans – in the Slovenian town of Radece, Sesko joined the youth set-up of his hometown club.

He went on to turn out in the academies of Rudar Trbovlje, Krsko and Domzale and really began catching the eye as a teenager.

During the 2017-18 campaign, when he was a 14-year-old turning out for Krsko’s Under-15 side, the young striker scored a mindblowing tally of 59 goals in 23 matches, regularly notching four and five-goal hauls, once managing seven in a 10-1 win over Rudar Velenje.

Sesko subsequently spent a year at Domzale, where he continued his prolific ascent at youth level, scoring 21 goals in 23 appearances.

All that happened while he was turning out in the youth ranks for the Slovenia national team, scoring for their Under-15s, Under-16s and Under-17s and getting noticed by Red Bull’s famous scouting network.

In the summer of 2019, he signed with Red Bull Salzburg, briefly overlapping with Erling Haaland – more on him later –  but was immediately sent out on loan to second-tier side FC Liefering, who are the Red Bull group’s Austrian feeder club.

Benjamin Sesko scored four for Liefering earlier – this, his second, is the least facile of his finishes.

Just 17, it’s surely getting time for RB Salzburg (and the Slovenia U21 side) to move him up… pic.twitter.com/sm490Ug4zI

It was at FC Liefering where Sesko got his first taste of senior football as a 16-year-old, sharing a dressing room with German prodigy Karim Adeyemi, also on loan from Salzburg.

In one of his first appearances for the club, he was sent off for serious foul play, just a minute after being introduced off the bench for Adeyemi in a 3-2 win over SV Horn. He scored his first senior goal on his return from suspension, but had to be patient with cameos off the bench – it was his only goal from 15 appearances that year.

Sesko scored 21 goals in 29 outings during his second year at Liefering and returned to Salzburg last summer ready to star for his parent club, signing a new deal that runs to 2026.

Last season he scored 11 goals in all competitions as Salzburg retained their Austrian Bundesliga crown, and made six appearances in the Champions League, but lived somewhat in the shadow of Adeyemi, who was their top scorer with 23 goals and has since moved to Borussia Dortmund.

He also made his senior Slovenia debut last June and became the national team’s youngest-ever goalscorer in a 4-0 win over Malta back in October.

A year younger than Adeyemi, the plan appears to be for Sesko to follow in his footsteps, become the main man at Salzburg next season, and earn a move to a major European club for a big-money fee a year or two down the line – the model that’s seen Salzburg return huge profits on Adeyemi, Haaland, Patson Daka and Dominik Szobozlai.

Newcastle United, Bayern Munich and Tottenham are also said to be keeping tabs on the striker, but noises out of Salzburg suggest they’re determined to keep their star asset for at least one more season.

Benjamin Sesko adjusts his body superbly to put his side in a comfortable position against Brøndby. 💥#UCL pic.twitter.com/XfLjwvFw4y

Almost all of his appearances to date have come as a central striker, and with a towering 6ft 4in frame, it makes sense for him to be the attacking focal point. Given that physical prowess, it’s natural and inevitable that comparisons have been made to former Salzburg striker Haaland.

But the 19-year-old is no old-school target man. He has more to his game than aerial ability and bullying opposition defenders. His pace and acceleration, like Haaland, immediately stand out, while his technical ability has seen him able to adapt and fulfil the link-up play expected of him in the Red Bull system.

Were he to sign for United, you’d imagine that he’d be an understudy to (or replacement for?) Cristiano Ronaldo, with Ten Hag’s squad looking light in that department following the departure of Edinson Cavani.

Indeed, given his energy, athleticism and ability to press, you could make an argument that he’s a better fit for Ten Hag’s style of football than Ronaldo.

He drops deep to get the ball, and then uses his great pace for running into the center while drawing defenders towards him.

As a result, he creates space to Noah Okafor, who misses and then Šeško finishes as he knows.pic.twitter.com/SC6BFckCvY

“Such comparisons [to Erling Haaland] motivate me and give me energy,” Sesko told Slovenian reporters last year.

“They do not represent pressure. I will listen and learn so I can be even better than he is.

“My team-mates at the club tell me that Haaland and I are very similar, especially in terms of speed. Most of them even tell me that I’m better than him!”

“Sesko is a very complete striker. He’s quick, big and technically good. He has to bring his potential onto the pitch consistently but he still has time,” says Red Bull Salzburg manager Matthias Jaissle (via Bavarian Football Works).

“We had a lot of offers from really big clubs,” Sesko’s agent Elvis Basanovic told SPOX on the decision to join Salzburg in 2019. “Had we decided on the money, Benjamin would have moved to England or Italy. But we decided to look at the bigger picture and the Salzburg project.

“The biggest clubs in Europe tried to get him. The interest in him was huge; I have never seen anything like it before.

“Salzburg has given Benjamin a path. Here, he can develop. The people in charge really wanted him, which was important to us. Here he also has a greater chance of playing for the first team sooner or later.

“Benjamin is one of the greatest talents of his age group in Europe. He has an incredible body, is tall, fast, has great jumping ability, is technically gifted and his greatest strength is his finishing.”

“While Sesko is of a similar build to Haaland, he’s right-footed and doesn’t have the uncompromising single-mindedness (at least not yet), nor the extreme penetrative pace of the Norway international,” wrote scouting expert Tor-Kristian Karlsen for ESPN.

“That said, Sesko does have many other skills that may see him turn into an interesting No.9 at senior level: he’s got fine balance, is difficult to knock off the ball, can find his teammates well from knock-downs and flicks, is a developing finisher and also displays some nice footwork.

Where are they now? Every Man United Academy Player of the Year since 2000