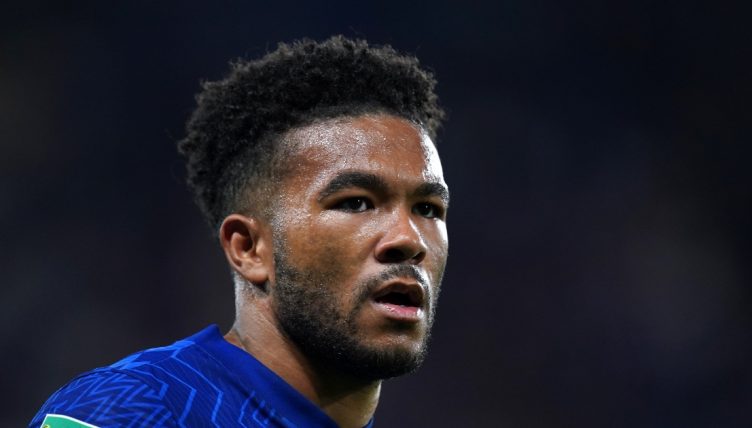 Chelsea and England defender Reece James is enjoying the best season of his career to date.

One of the many talented youngsters who’s come through the ranks at Cobham, James has scored five goals and registered seven assists for club and country – including his stunning strike against Juventus in the Champions League.

You could argue that the Chelsea full-back is the world’s best in his position right now. But what have other players, managers and pundits said? Here’s nine of the finest quotes on James’ form this season.

“Right now he plays as a wing-back, and he does this at a very high level,” Tuchel told Goal during his pre-Juventus press conference.

“If he plays, he needs to be the best version of himself. He is improving, he takes responsibility and it is needed.

“He is far from finished in his development. He is super young. He has all the potential to be a big and important player for Chelsea and he is on his way. I feel he is dedicated and hungry for more, and that is what we want.”

James’ fellow full-back took to social media after the win over Leicester to give his own succinct verdict on James’ form.

The full-back had just shown off his raw physicality during Chelsea’s 3-0 win, sending Leicester centre-back Caglar Soyuncu flying to the floor with his upper body strength in one memorable moment.

“I have been banging the drum for Reece James for years. I remember coming back and training with the team after being in America,” Cole told BT viewers after the full-back’s Man of the Match display against Juventus.

“I was blown away by his technical ability. Especially for such a big, strong, athletic lad. His touch is velvet, he makes the right pass, takes the right decisions.

“When he gets in front of goal it is like your top, top strikers’ level of composure and technique.”

“Reece James, who I thought was like a man playing against boys,” Ferdinand said after James had dismantled Leicester.

And the former England defender expanded on his point following the Juventus match. “For years Chelsea have invested in youth but didn’t have the managers who are as confident as Frank [Lampard] and Thomas now,” Ferdinand said after Chelsea’s 4-0 victory.

“The odd one might have come in but never stayed around. Reece James has been phenomenal. What this does for Cobham is the Under-8s, Under-9s and later academy kids are seeing a pathway.”

“He’s been phenomenal,” McCoist said after the Juventus game. “His goal, it was the pace and the power that beats him [Szczesny].

“He had another shot maybe 10, 15 minutes early where the goalie makes a great save down to his right-hand side.

“He just looks like he’s in the form of his life, to be honest with you.”

👏 “Reece James has been phenomenal. He has been in the form of his life!”

🔵 “You don’t expect a Juventus side to be torn to shreds. There’s a desire about #CFC.”

“He’s easily one of the best right-backs in the world at the minute,” Wright said on Match of the Day after James scored twice against Newcastle.

And, speaking before England’s victory over Albania in November, the former Arsenal striker told ITV viewers: “He’s keeping someone like Trent Alexander-Arnold out, who is a fantastic player himself.

“He’s got everything. His delivery is amazing, his closing down. He’s got the ability and strength to progress the ball, he’s so combative. He’s a super player.”

Crooks has become legendary for his hilariously unbalanced Team of the Week selections but his inclusion of James after his Newcastle performance was bang on the money.

“[He] scored the first with his left foot and the second with his right and I can’t tell which one James struck better,” he wrote. They were both hit with the same power and precision.

“This is the second consecutive week I have selected James and done so without the slightest hesitation. The lad is playing out of his skin.”

Reece James’ first of his two goals vs. Newcastle on Saturday was emphatic 🔥

Sutton is another pundit who doesn’t hold back in criticising players so fans would have taken note of his praise for James this season.

“His goals at the weekend? Two of the purest strikes,” the former Chelsea striker said after the Newcastle game. “One left-foot, one right-foot.”

“Is there a better striker of the ball in the Premier League than Reece James?”

“You look at Reece James, who for me is the best right-back in the country,” Savage told BT Sport viewers after a sensational performance from James at Leicester.