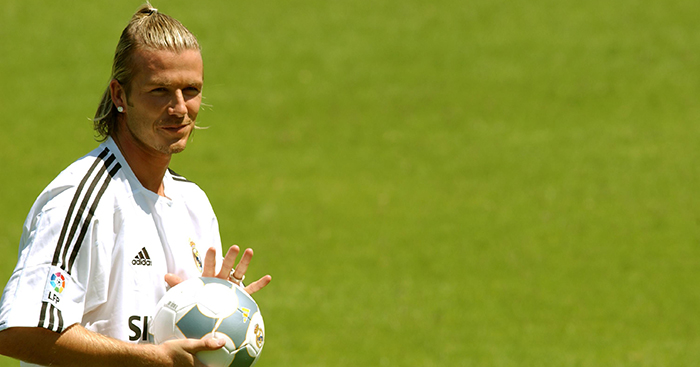 We have remembered with relish the summers of 2013 and 2014 in our countdown of the greatest transfer windows of all time, but now we’re into the top five…

David Beckham from Manchester United to Real Madrid for €37.5m.

Sir Alex Ferguson once said that Beckham was sold to Madrid because he thought he was bigger than the manager.

Some believe he should have shelved his showbiz plans, regained Fergie’s trust and stayed at Old Trafford, but considering his move to Madrid was the main reason why United went on to sign Cristiano Ronaldo, it didn’t work out too badly for United.

As for Beckham, was his spell at Real truly successful? There’s no definitive answer to that, but if we know something for certain, it’s this:

1) Florentino Perez never signed just Beckham the footballer so there’s no point in analysing his spell at Real Madrid from just a football perspective.

2) Had Beckham shied away from joining the likes of Zidane, Ronaldo and Figo in Spain, both football and pop-culture would have definitely lost too much for me to even begin to process that.

3) If you don’t get goosebumps every time you come across pictures of him hanging out with the rest of the Galacticos, or his ridiculous assist to Ronaldo against Zaragoza, you simply have no heart.

Even more importantly, was picking Beckham over Dinho, just because Perez thought the Brazilian was too ugly for the Galacticos, one of the dumbest decisions in the history of mankind?

You know the answers, don’t you?

1) Yes, kids, there was a time when you could land an 18-year-old Cristiano Ronaldo for Gervinho’s annual salary.

2) That was the first Roman Abramovic’s summer in Chelsea and the one that definitely changed the Premier League forever.

In less than three months, the Russian billionaire blew up the market by splashing €167m – more than he had paid for the actual club – on new signings and completely redefining the whole concept of owning a team.

Not all of his business paid off, of course. Out of sixteen guys signed by Chelsea that summer (some of them came on a free transfer), only six became instant hits – Joe Cole, Damien Duff, Claude Makelele, Geremi, Wayne Bridge and Glen Johnson.

Hernan Crespo scored 12 goals in all competitions in his debut season in England but was loaned back to Italy as soon as Mourinho took charge in 2004.

Alexey Smertin was nothing more than Roman’s high-paid interpreter, while Adrian Mutu simply had too much fun off the pitch.

Whether you liked it or not, that was one historic summer for football.

Within a month after the move, the Brazilian broke into the star-strewn starting line-up to replace Rui Costa, then clinched the Serie A footballer of the year award and became an all-time legend after winning the Champions League and Ballon d’Or three years later.

As the philosopher Berlusconi once said: “We bought the guy for peanuts!”

Honourable mentions: Cesc Fabregas from Barcelona to Arsenal for €3.2m, Jens Lehmann from Borussia Dortmund to Arsenal for €3.5m. If you ever searched for Wenger’s definitive transfer window at Arsenal, you can stop now.

Carlos Queiroz from Manchester United (he was an assistant manager at the club) to Real Madrid, Frank Rijkaard from Sparta Rotterdam to Barcelona.

Two signings that just couldn’t be more opposite, could they?

Adrian Mutu from Parma to Chelsea for €19m.

Somehow, what would have been a fantastic deal for any model agency turned out to be an absolute nightmare for a football club. The world is a weird place.

Cristiano Ronaldo taking his first steps on a big scene after completing one of the greatest moves in Premier League history.

In mid-August, Ronaldo made his league debut against Bolton Wanderers, coming on as a substitute for the last thirty minutes and immediately receiving a standing ovation from United fans.

He neither scored nor assisted, yet everyone who was watching that game could feel there was something different about this guy: his pace, technique and over-the-top self-esteem, as if he had spent 10 years playing all over England before finally arriving at the Theatre of Dreams. 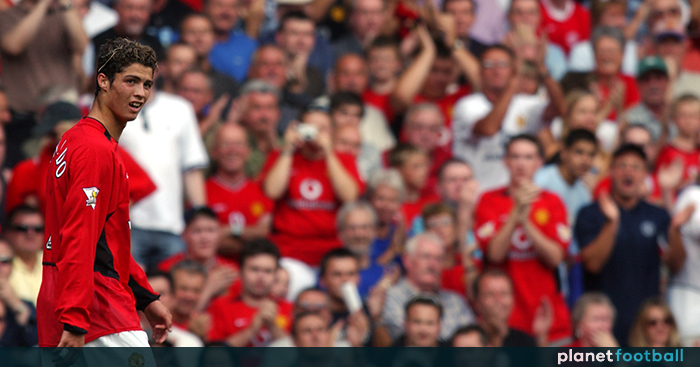 Well, here’s what George Best said about that game at that time: “It was undoubtedly the most exciting debut performance I’ve ever seen.

“A few of my old team-mates were at the game and they compared him to me. There have been a few players described as ‘the new George Best’ over the years, but this is the first time it’s been a compliment to me.

“There have been players who have some similarities, but this lad’s got more than anyone else, especially as he is genuinely two-footed. He can play on either wing, beat players with ease and put in dangerous crosses with his left or right leg. When was the last time you saw that?”

It’s been more than 14 years since that day… but the answer remains the same. Never.

Beckham arriving in Spain in the most early 00’s outfit possible – a top knot, unbuttoned white short, massive earrings, ripped blue jeans and tight white blazer. Look at it long enough and you might as well fall into a nostalgia coma.

Also, there was nothing like watching David’s long-awaited presentation and seeing one of the younger Madrid fans invade the pitch, get his autograph, then almost immediately get interviewed by 50 Spanish journalists simultaneously as if he had just witnessed The Second Coming or something.

Again, just imagine how empty our life would be without the Galacticos. 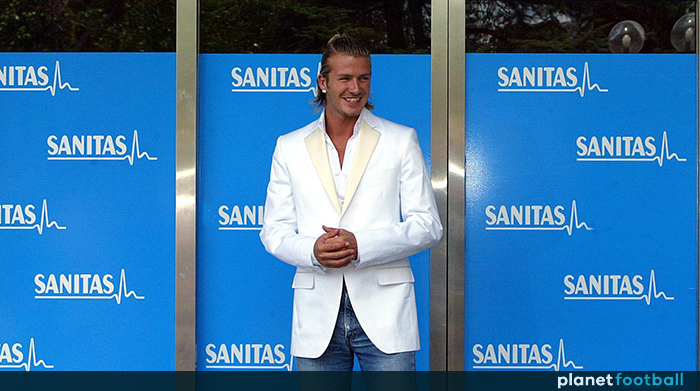 Claudio Ranieri ended up having a whopping 10 first-team midfielders that season, including Lampard, Makelele, Petit, Duff, Cole, and Veron to name a few, yet still fell short. Thirteen years later, he’d win the title with Marc Albrighton and Danny Drinkwater.

Firstly, the Catalans landed two key defenders that summer – Rafael Marquez (€4.7m) and Giovanni van Bronckhorst (initially came from Arsenal as a loanee, then signed a three-year deal in 2004) – who would go on to play more than 250 games for the club combined and start in the Champions League final against Arsenal three seasons later.

Secondly, Barcelona expertly took advantage of the obvious drawbacks of Florentino Perez’s all-star approach and threw a knockout punch by signing one of the greatest footballers ever behind Madrid’s back who would help them win five major titles over the next three years and produce more than a few moments of brilliance in the process.

After all, Fergie would need two or three more transfer windows to finally build another one of his Champions League-winning sides while Barca did it right then and there, during three busy summer months of 2003. 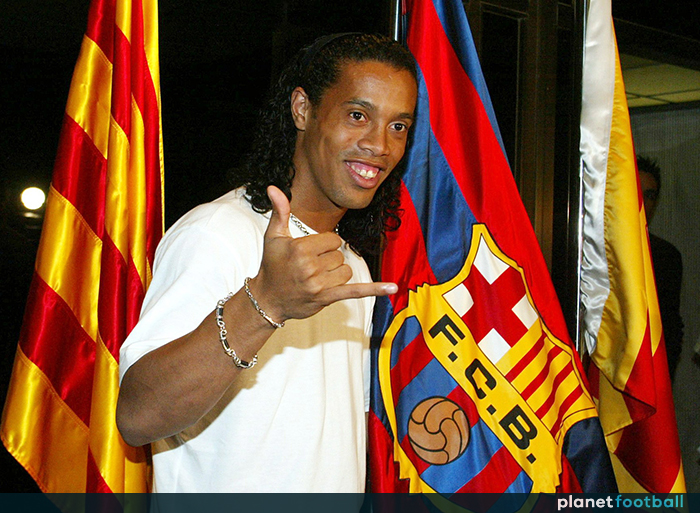 This was a massive window both for the Premier League and the rest of the world.

Three European giants made historic signings that year: Manchester United got Cristiano Ronaldo while AC Milan and Barcelona landed two legendary Brazilians. All of those guys ended up winning tons of trophies over the next five years, including the Ballon d’Or and the Champions league, completely reshaping the modern game in the process.

Plus, Chelsea entered the picture that year and became one of the most attractive brands in the world basically overnight thanks to Abramovic’s ridiculously aggressive transfer policy.

If that window didn’t exist, we would have to invent it.