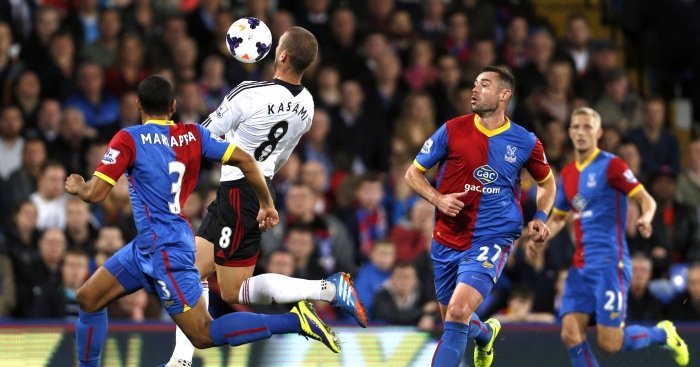 No matter how hard footballers train on their weaker foot, there is almost always going to be a drop of off some sort.

It’s why the idea of players like Arjen Robben cutting inside has become a cliché, and why you’ll rarely if ever see Juninho Pernambucano hit a free-kick with his left.

Still, there are some occasions where players are forced onto their ‘wrong’ foot, and for every 10 predictably wayward efforts there is one truly sensational goal, a strike as impressive as it is unlikely.

The pinnacle of wrong-foot goals was scored by Swiss midfielder Kasami in 2013, showing obscene technique to bring the ball down with his chest and fire a first-time volley on the run beyond Julián Speroni.

It was only Kasami’s second goal for Fulham, so it took a little while for us to clock that he was left-footed, making the finish even more outrageous.

Sadly for him, it would prove to be his best Fulham goal by some distance, and ultimately wasn’t enough to keep his team up at the end of the season.

When Kasami curled in the opening goal for FC Sion against Luzern in the Swiss Super League, it brought back memories.

Specifically, memories of being shocked to learn he was left-footed when he scored that goal against Palace.

Has any other player scored the two best goals of his career with his ‘wrong foot’? Perhaps, but surely none will have been as good as these.

A lot of the best goals are pure instinct, which is a nice way of saying O’Shea’s strike against the Gunners felt like an out-of-body experience for the Irishman.

If the run behind the Arsenal back-line is a little uncharacteristic, the perfectly executed chip is something else entirely.

O’Shea might be unable to replicate this if he tried 100 more times, and the look of shock on his face suggests he definitely wouldn’t be able to, but it really doesn’t matter.

Throughout this run, Nürnberg’s defenders have one thing on their minds: do not, whatever you do, allow Arjen Robben in onto his left.

Emmanuel Pogatetz must even thin he has done his job, blocking off the angle and forcing the Dutchman into a position where it’s impossible for him to get a shot away with his favoured foot.

Doesn’t matter, though, does it?

We ummed and aahed about including Zamora – after all, he is one of a select few players to have taken penalties with both his right and left feet – but he is predominantly a lefty.

Not that you’d have been able to guess from this wonderful finish, with the Fulham striker ruining West Brom’s best-laid plans before anyone realises they’re even in danger.

To leave a defender on his backside with a feint is impressive on its own.

To follow it up with a dinked finish over the goalkeeper with your wrong foot isn’t too shabby either.

To do this against one of the world’s best goalkeepers and defenders, in the semi-final of the Champions League, is something you feel only Messi could do.

Former Newcastle United striker Cissé scored the two best Premier League goals of his career in the same game, and didn’t want to make either of his feet feel left out.

The first saw him flick the ball up before hitting a stunning left-footed volley, while the second – the one you might remember better – involved a flagrant disregard for the laws of physics.

Logic dictates one of the two was with his ‘wrong’ foot, though both look so effortless that it’s hard to tell which.

If defenders have a preternatural instinct to show Arjen Robben and Lionel Messi onto their right, the opposite applies to Cristiano Ronaldo.

Make sure he doesn’t drive right and open up space to shoot across goal, let him come inside onto his weaker foot where he’s less dangerous and…

Ian Harte scored some crackers from range in his career, but most of them were dead-ball hits with his thunderous left foot.

The Irishman’s right foot was normally as close to the archetypal ‘swinger’ as you could get, and he’d only use it to shoot when he absolutely had to.

We should be grateful to the Derby defence, then, for making a left-footed strike an impossibility when they took on Harte’s Leeds team back in March 1999.

The way the ball makes its way into the top corner is a thing of beauty, and the end result somehow never feels in doubt.

Look at Ramsey’s face – it’s the confidence of a man who knows, for a split second, the idea of a ‘weaker foot’ doesn’t exist.

Tim Cahill scored some fantastic goals throughout his club and international career, including one from 40-odd yards in the Melbourne Derby.

However, most of these were either with his favoured right foot, or his other favoured foot, his head.

He was clearly saving his best left-footed strike for a big occasion, and what’s bigger than at 1-0 down in a World Cup game against the Netherlands?