Billy Gilmour: Everything you need to know about new Chelsea signing 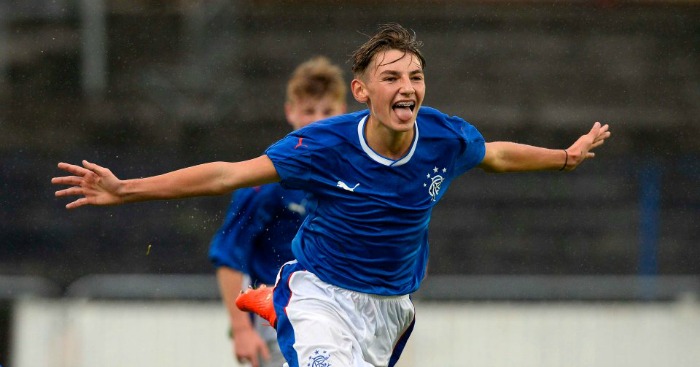 Chelsea have won the race for one of the most sought-after talents in Europe, Rangers starlet Billy Gilmour.

Arsenal, Manchester United, Barcelona and Bayern Munich were all reported to be chasing Gilmour, but the 15-year-old has agreed to join Chelsea.

A “significant fee” has been agreed for Gilmour to move to Stamford Bridge when he turns 16 in June, but what do we know about Gilmour?

– Just to make you feel incredibly old, Gilmour was born on June 11, 2001, when Shaggy’s Angel was in the middle of a three-week spell at the top of the UK’s singles chart.

– Barcelona scouted the attacking midfielder while he played for Scotland Under-16s last year.

– He has already represented Scotland at Under-17 level, making his debut for the side last February.

– Gilmour is among the likes of Lionel Messi, Mesut Ozil and Paul Pogba in being sponsored by Adidas.

– While he is yet to appear for Rangers’ first team, caretaker boss Graeme Murty included Gilmour in the matchday squads for Scottish Cup clashes with Morton and Hamilton.

– Both Arsenal and Chelsea are understood to have given Gilmour the VIP treatment, but a trip to the Blues’ training ground convinced the teenager Stamford Bridge is his preferred destination.

Rangers boss Pedro Caixinha had spoken to Gilmour’s parents in an attempt to convince the player to remain at the Scottish club.

“I do believe that for Billy, the family, ourselves or even Chelsea or another club later in the future to receive a player on another level, better ready to go on this adventure, it is better for him to stay here.”

However, after the move was confirmed on Tuesday, Rangers released a statement which read: “The club’s preference would have been for Billy to stay at Rangers but when he made clear his desire to move to the Premier League it was important that we maximised the commercial value for him. We believe we have done this.

“The agreement will provide Rangers with a significant sum for a young player who has yet to play first-team football, and further significant amounts could be due based on milestones being reached. We are pleased with this outcome and believe this deal represents good value for Rangers.

That he was sought after by many Premiership clubs, and indeed a number of the largest clubs in Europe, further demonstrates the quality of player now being produced by the Academy. Everyone at Rangers wishes Billy well for his future.”