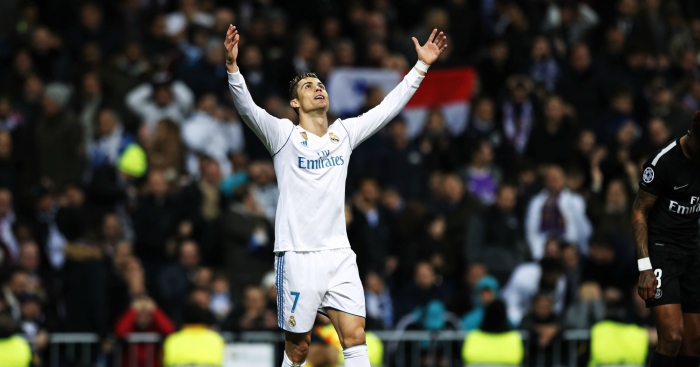 Cristiano Ronaldo joined a club of one in February 2018, becoming the first player to score 100 goals for the same club in the Champions League as Real Madrid defeated PSG.

Ronaldo netted a brace as his side came from behind to earn a 3-1 victory in the first leg of their last 16 tie, becoming the first player into double figures in the competition this season too.

While critics suggest the Portuguese international has ‘struggled’ for form domestically this term (he has still scored 11 goals in 18 appearances), he has had an outstanding campaign in Europe, grabbing 11 goals in just seven games.

That took him to a grand total of 117 career Champions League goals, and an incredible record of 101 in 95 appearances for Real. We’ve taken a closer look at the stats of just how Ronaldo made it to the landmark.

Cristiano Ronaldo has scored 431 goals in 423 games since joining Real Madrid in 2009. He’s the first player to score 100 goals at a club in the Champions League. pic.twitter.com/8cLFF7I9xv

Dissecting Ronaldo’s 101 Champions League goals for Real Madrid, you find that a huge 71 have come via his right boot.

Of the 30 that weren’t right-footed efforts, 17 have been scored with his left, and 13 with his head.

Perhaps surprisingly, he’s managed just 15 from outside the penalty area, meaning 86 of his efforts have come from within the confines of the 18-yard box.

And, including his effort from the spot just before half-time against PSG, which drew Real level, he has scored 13 Champions League penalties for Los Blancos.

In six appearances against German giants Bayern Munich, Ronaldo has managed an impressive nine goals, making them his most fruitful opponents.

In fact, German clubs prove to be quite charitable towards the 33-year-old, as he has grabbed seven goals against both Borussia Dortmund (nine appearances) and Schalke (four appearances).

He has also netted seven times against Juventus and Ajax – both from five appearances – while APOEL Nicosia, Galatasaray and Malmo have all conceded six times to Ronaldo – in four, three and two appearances respectively.

Ronaldo gets more remarkable with every year. Hat-tricks vs Bayern and Atletico in the knockout rounds last year, two past Juve in the final and two past PSG. One of the most driven players in history. #RMAPSG

Unsurprisingly, Ronaldo still holds the record for the most Champions League goals in a single season – hitting 17 in 11 games as Real lifted the trophy in 2013-14.

Including this season, Ronaldo has averaged a goal every 90 minutes or less in over half of his European campaigns with Real Madrid – beating his 2013-14 average of a goal every 58 minutes by one minute this term.

He has reached double figures in each of the last seven seasons – a remarkable record when you note that no-one else has managed more than two consecutive 10-goal hauls in the competition.

Cristiano Ronaldo has scored 10+ Champions League goals for the seventh season running—no other player has done so in more than two pic.twitter.com/bgxFimYF2V

Cristiano Ronaldo, his Pompey free-kick & a decade of trying to top perfection

Ten of the best European away displays from English sides