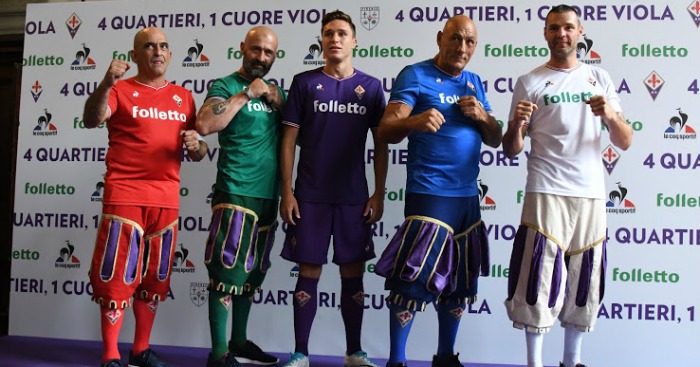 Fiorentina will become the first professional team to wear four different away kits next season – and the story behind their choice of colours is one of tradition, violence and immense local pride.

The Serie A outfit will rotate between blue, red, white and green away kits throughout 2017-18, representing the four historic neighbourhoods of Florence.

Given we’re talking Fiorentina and Le Coq Sportif, the kits are obviously extremely classy, and they have an equally excellent story behind them.

Every year on June 24, players from Santa Croce (blue), Santa Maria Novella Rossi (red), San Giovanni Verdi (green) and Santo Spirito (white) compete in a brutal contest of Calcio Storico – an incarnation of football which dates back to the 16th century.

What follows resembles something more akin to Gladiator rather than football, as two teams of 27 players go toe-to-toe for 50 minutes without a break in a dustbowl, where punching, kicking, headbutting and choking are all permitted.

Our friends at Copa 90 visited Florence to take in the spectacle and have produced a brilliant documentary on the occasion, highlighting the influence of the Viola in bringing together the players who have just spent the day kicking the sh*te out of each other.