Can he take long throws? Everything you need to know about Liam Delap 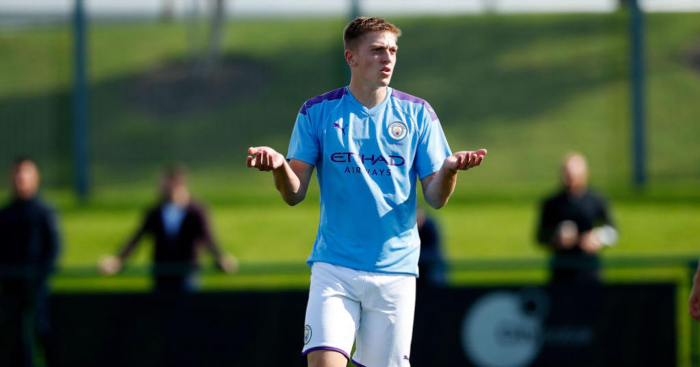 Remember Rory Delap? He spent most of the 2000s launching long throw-ins like Katyusha rockets into opposition boxes.

Well, he also had a son, Liam Delap, who was named on the bench for Manchester City’s opener with Wolves at Molineux.

So other than having a famous dad who was really, really good at throw-ins, who is Liam Delap?

Liam was born in 2003, while Rory was playing for Southampton. Unlike his old man, Liam is a 6ft striker, with electric pace, skill and a real eye for goal.

The 17-year-old started his career at Derby County, breaking through in the U18 Premier League in the 2018-19 season.

He was soon snapped up by Man City and smashed seven goals and six assists in just 11 appearances in his first season at the Etihad.

His performances for City were full of him bullying defenders with some rare aggression for a young striker.

Speaking to the Manchester Evening News, Delap said: “When I’m on that edge it’s when I’m at my best, it’s just not tipping over that edge, and everyone has told me that they’d never want to take it out of me.

“it’s just controlling that final tipping point of what is acceptable and what’s not.”

Over the summer Delap trained with the senior team, before featuring in the EFL Trophy. He netted twice in City’s 3-0 win over Mansfield before scoring another in the 3-3 draw with Derby in the Premier League 2.

Overall, he has 12 goals and eight assists from 27 junior appearances, an impressive record.

But can he do long throws?

Never say never, but according to Papa Delap in an interview with the Stoke Sentinel, Liam was put off of taking throw-ins after being told off by another parent in an Under-10 game.

It will be something if Pep Guardiola ever has to result to launching long throws to get results, but we’d love to see it.