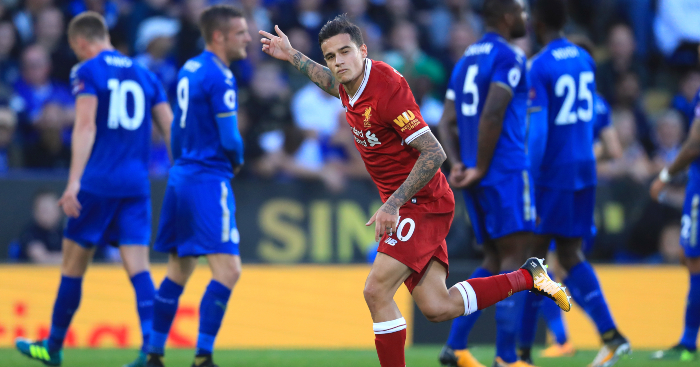 As we all desperately search for some kind of football fix, you may have come across stories that Leicester City are in the running to sign former Liverpool man Philippe Coutinho. Excuse us for being cynical, but we have our doubts.

At a time when there is no actual football to report on – bar the Belarusian Premier League – Coutinho is a digital publication’s wet dream. The attacking midfielder appears to have little chance of a long-term future at Barcelona, has obvious ties to Liverpool and is a sexy enough name to link to the rest of the Premier League’s big six, whose supporters generate the most clicks online.

Indeed, headlines today regarding Coutinho also feature mentions for Manchester United, Chelsea, Liverpool and Tottenham. But the mention of Leicester is a surprise twist, emanating from his previous relationship with Rodgers, who signed the Brazilian for Liverpool in a bargain £8.5million deal from Inter.

How the rumour began

It should be fairly easy to dispel any chance of Leicester signing Coutinho, given Barcelona reportedly want to recoup a hefty chunk of the potential £142million they spunked on signing him in the first place and the player earns a reported £240,000 a week.

Given the financial uncertainty surrounding football, it would be pretty brave of Leicester to bankroll such a move, but let’s have a closer look at the story anyway.

Liverpool’s transfer stance is that they don’t want him. Given they’ve won the Champions League and lead the Premier League by 25 points since sell him, file that one under ‘no sh*t, Sherlock’.

The initial story credits the Daily Express as the source, which takes us to the headline: “Leicester eye Philippe Coutinho transfer but Brendan Rodgers is aware of key problem.”

So there’s already an element of doubt in the headline, and the second line of the story concedes: “However, Brendan Rodgers realises the Foxes will be unable to compete in the transfer market.”

Right, well that doesn’t sound too promising. The report also attributes the story to the Daily Mirror, which brings us to the headline: “Liverpool have zero interest in Philippe Coutinho transfer as future hangs in balance.”

It seems strange they haven’t gone big on Leicester’s interest, given it would be quite the coup. In fact, they don’t mention Leicester until the 17th paragraph – after Manchester United, Tottenham, Arsenal, Chelsea and Arsenal.

“Rodgers would love to work with the midfielder again but realises Leicester can not compete with the likes of United in the transfer market,” the report states.

“But if the player can force his price down with Barca, it would open up far more options for him.”

We suspect Rodgers would love to work with Lionel Messi, too, but that doesn’t mean the Argentine is heading to the King Power Stadium any time soon.

To be fair to the Mirror, they at least make clear the only chance of a deal would be if Coutinho can force his asking price down, which may be necessary if he is to leave the Camp Nou permanently.

Except it turns out the Mirror isn’t the only publication to originally report this story. Spanish outlet Sport also published a story on Monday morning headlined: “Manchester United & Leicester monitoring Coutinho situation at Barcelona.”

Leicester are keen, according to the report, but sadly: “It’s unlikely the Foxes, Premier League champions in 2016, would be able to convince the Brazilian to join them.”

Right, so Leicester want to sign Coutinho but can’t afford him and he probably doesn’t want to join them anyway.

If my auntie had balls she’d…probably have a better chance of signing for Leicester City than Philippe Coutinho.