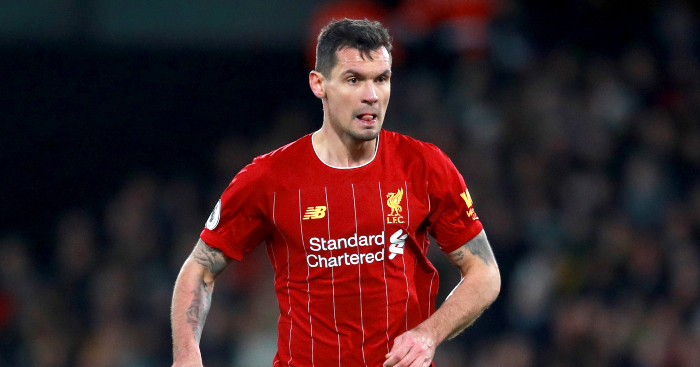 Liverpool defender Dejan Lovren has been linked with a move to Arsenal or Tottenham this week – but something doesn’t seem quite right.

But if, like us, you don’t get any kind of enjoyment from reading the same piece of gossip regurgitated ad infinitum you might enjoy our Careless Whispers feature, in which we’ll look at how some of the most tenuous of links becomes repeated to the extent that everyone starts to believe it might actually happen.

And this week we’ve taken an interest in a story linking Arsenal and Tottenham with a move for Liverpool centre-back Dejan Lovren.

Our attention was first grabbed by a headline on the Mirror’s website published on Monday afternoon suggesting: “Arsenal and Tottenham ‘considering transfer swoop’ for Liverpool’s Dejan Lovren.”

You can understand how such a rumour comes about. Lovren has been out of favour at Anfield for the past two seasons, during which his long-term future at the club has regularly come under question. With a year left on his deal this summer, now is probably the time to cash in, and with Spurs and Arsenal showing defensive frailties this season, that seems like a juicy chance for clicks.

To give the Mirror some credit,  the inverted commas in the headline make clear they’re only reporting what has been reported elsewhere. And the first line of the story actually shows signs of encouragement; the link comes from Sky Sports, who are only likely to put their name to a transfer exclusive if it is well sourced.

Except a click on the link in the Mirror’s story only takes us to Sky Sports’ Twitter, and they have added an element of doubt by throwing in a “reportedly interested” alongside a link to a transfer blog dedicated to Arsenal.

Lovren is the first name to be mentioned, with the story attributed to the Daily Express. (Coincidentally, two separate Mirror stories also appear linking Arsenal with moves for Issa Diop and Samuel Umtiti – so they probably want a centre-back, but who they actually want is anyone’s guess).

Again, a national publication seem to have put their name to a transfer story, which bodes well. A quick Google search takes us to the Daily Express’ story: “Tottenham in Arsenal transfer battle for Dejan Lovren as Liverpool set price tag.”

Here we go. Five paragraphs tell us Spurs and Arsenal are among a number of teams eyeing Lovren. There’s no “according to” or “reportedly”, so we’re looking good.

But then we get to the sixth paragraph, and it turns out this isn’t a Daily Express story after all, but it instead originates from La Lazio Siamo Noi. We must confess our ignorance and admit we’ve never heard of this particular outlet.

It’s an Italian website dedicated to Lazio news, and they do indeed run a report suggesting Lazio are among the clubs interested in Lovren, mentioning right at the bottom of the story potential interest from Milan, Lyon and…Arsenal and Tottenham.

La Lazio Siamo Noi’s story does not suggest any sources or inside knowledge. We don’t want to be disparaging towards their work, but if they had such an inside track, the fact English regurgitations of their story have felt the need to leave out their name seems slightly…suspicious.

To give them credit, La Gazzetta Dello Sport have corroborated their claims of Lazio’s interest, but crucially fail to mention Arsenal or Tottenham.

With no actual football taking place due to the coronavirus, outlets need content to keep their websites ticking over – why the f*ck do you think we’re doing this? – and the Lovren to Arsenal or Tottenham story continues apace thanks to appearing in BBC Sport’s gossip column, which again chooses not to credit La Lazio Siamo Noi, but rather the Mirror (who credit Sky Sports, who credit the Express, who eventually credit La Lazio Siamo Noi – keep up, you at the back).

The Daily Mail are now in on the act as of Tuesday morning, also conveniently choosing not to credit the original source, but rather the Express.

That has led to Twitter becoming full of #bantz about the apparent transfer policy being employed by north London’s two biggest clubs, while a quick search of NewsNow suggests the rumour is unlikely to be put to bed any time soon. 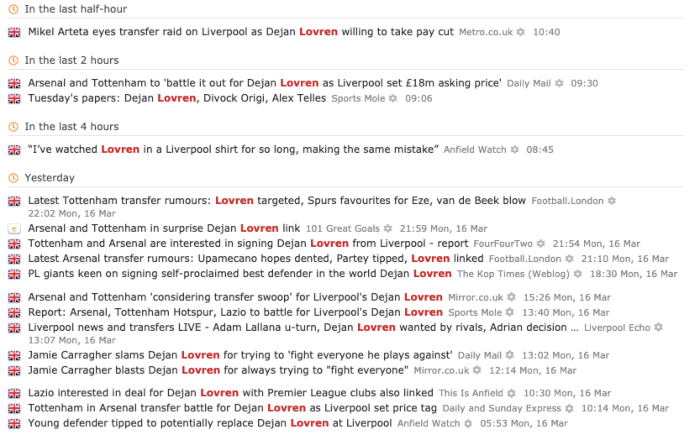