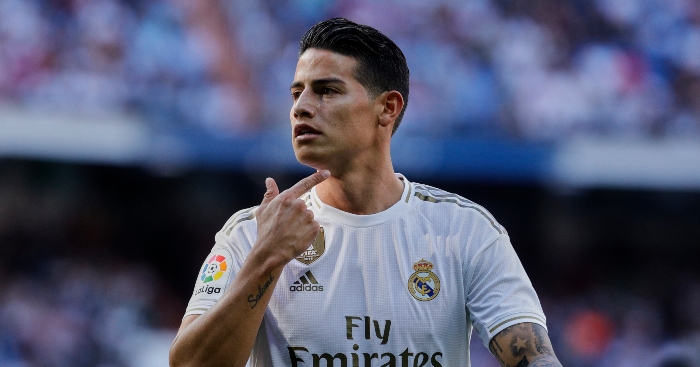 James Rodriguez is kicking his heels out of favour at Real Madrid, leading to recent links with both Arsenal and Everton, but nobody can quite seem to work out where the story originally comes from.

But if, like us, you don’t get any kind of enjoyment from reading the same piece of gossip regurgitated ad infinitum you might enjoy a new feature we’re trialling this January, Careless Whispers, in which we’ll look at how some of the most tenuous of links becomes repeated to the extent that everyone starts to believe it might actually happen.

We started with a doozy, Hakim Ziyech to Arsenal, and followed that with the curious case of Manchester United and Liverpool’s interest in Bayer Leverkusen’s Kai Havertz. Now our attention has been drawn back to Arsenal and the reports linking the club with a move for Real Madrid’s James Rodriguez.

We thought we were over tenuous gossip linking Rodriguez with a move to one of the Premier League’s big boys when the attacking midfielder left Real Madrid to join Bayern Munich on loan. Sadly, Bayern opted against making that move permanent.

That led to plenty of stories in the summer mooting England as a potential destination for the Colombia international, only for the player to stay put in Spain.

In November, Marca even reported that Rodriguez had rejected a January move to Arsenal as he wants to fight for his place at Real, although even that seemed spurious enough as it quoted an unsourced ‘English media report’.

Rodriguez has since failed to re-establish himself at the Bernabeu, partly due to injuries, making just four starts in La Liga so far this season.

As a result, Rodriguez is an obvious name to include in gossip columns, and on Sunday evening the Daily Mail brought us the news that “Arsenal and Everton ‘to battle for Real Madrid star James Rodriguez on loan’ as Colombian struggles for game time under manager Zinedine Zidane”.

Those quotation marks around ‘to battle for Real Madrid star James Rodriguez on loan’ immediately caught our attention, as if they’re already trying to absolve themselves of any suggestion there might be some truth in this story. Whenever anything of that ilk is added to a headline, it might as well read ‘please don’t shoot the messenger’.

Alas, the first paragraph makes it clear the story in fact originates in Spain, with a link to a report from AS included shortly afterwards. AS do indeed suggest (with a Google translated headline): ‘Arsenal and Everton would seek the signing of James Rodriguez.’

We’re already confused by the first paragraph, which reads: ‘Before the arrival of Mikel Arteta to the Arsenal bench, the Spanish coach would be looking for a quality reinforcement for his midfield and the goal he would have would be James Rodriguez.’

Even if that’s just confusion caused by the inaccuracies of Google translate, the major warning signs come in the following paragraph, which starts with the phrase, ‘According to Sports Mole of England.’

And so we head over to Sports Mole and a story from six days ago (which means this isn’t news) that is immediately unsure of itself. The quotation marks in the headline are there, the third word in the opening line is ‘reportedly’ and the fourth paragraph completes the cycle of bullsh*t with the line, ‘A report in Spain suggests that Arsenal are also keen.’

Said report in Spain is not cited, so we have no idea where this actually came from. There is a link to Marca earlier in the story, and Marca are based in Spain, so that sounds promising – except the story only names Everton and Napoli as potential destinations.

Turns out that James Rodriguez rumour is utter BS. Sports Mole saying us and Everton are in for him 'reportedly' and whatever Spanish outlets that have made a piece are referencing back to Sports Mole. Nonsense.

We wouldn’t want to suggest a relatively uninteresting weekend of English football prompted publications to desperately scrape the barrel for a transfer update involving big clubs, so it must just be a coincidence the online arms of English newspapers have now decided to regurgitate an already shady story from last week.

A quick Google search of Rodriguez’s name brings us stories and live blogs from the Mail, Mirror, Independent and Express.

Rather wonderfully, Sports Mole have also included AS’ report in the round-up of the Monday newspapers, presumably choosing to ignore the fact AS’ story comes from a post on their own website.

And herein lies the problem, once one publication decides to run the story, every other publication feels like they must do the same so they don’t miss out on the clicks. And then we’re left with this… 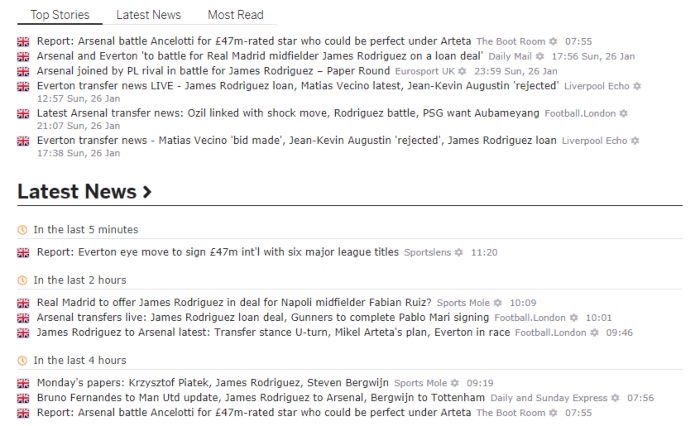