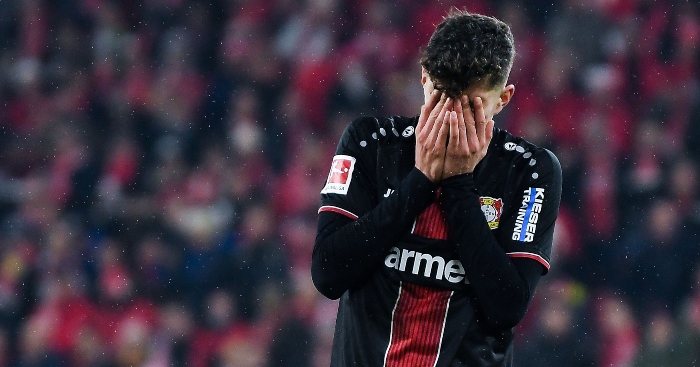 Liverpool and Manchester United fans may be rubbing their hands at the prospect of their respective clubs signing Kai Havertz – but they probably shouldn’t get too excited.

But if like us, you don’t get any kind of enjoyment from reading the same piece of gossip regurgitated ad infinitum you might enjoy a new feature we’re trialling this January, Careless Whispers, in which we’ll look at how some of the most tenuous of links becomes repeated to the extent that everyone starts to believe it might actually happen.

We started with a doozy: Hakim Ziyech to Arsenal. And now it’s the time for the curious case of Manchester United and Liverpool’s interest in Bayer Leverkusen’s Kai Havertz.

Havertz is no stranger to links with the Premier League. We profiled the midfielder shortly after he had broken into Leverkusen’s first team at the age of 17 in 2017, and it didn’t take long before he was being linked with a big-money move to the Premier League.

The Daily Mail reported that Liverpool, Manchester United and Arsenal were scouting the player in October 2017. Later that month, Sky Sports suggested Tottenham were monitoring Hazertz along with Justin Kluivert and Donny van de Beek.

In April 2018, The Sun quoted unsourced reports to suggest Arsenal were leading Liverpool and, erm, Southampton in the race to sign the Germany international. Come December 2018, Sport Bild went for the one-size-fits-all report linking Havertz with a move to either Manchester City, Bayern Munich, Barcelona, Real Madrid, PSG, Manchester United or Liverpool for a fee of €80million.

This is where things begin to get (even more) muddled. Plenty of reports currently regarding a potential move to Liverpool cite The Athletic as a source for the story. Given the calibre of journalist employed by the publication – James Pearce is the man for the goings on at Liverpool, while Raphael Honigstein is an expert on all things Bundesliga – any mention of The Athletic adds plenty of credence to a story.

That brings us to the Liverpool Echo, who included the following line in a round-up of transfer rumours involving the Reds on January 12: ‘According to The Athletic (via The Express), Liverpool have held talks with the £85million-rated midfielder’s representatives.’

And so we head to The Express and a story titled, ‘Man Utd decide January transfer stance on £100m target Kai Havertz’. The piece includes the line, ‘United have subsequently decided to wait until the summer to make their move, according to The Athletic,’ before going on to mention Liverpool’s reported interest and suggesting Bayern Munich ‘have been touted as the favourites to land Havertz’. (It doesn’t mention by who, and don’t worry, we’re struggling to keep up now too.)

So now we click on the link to The Athletic, which brings us to their January transfer window tracker that they updated on a daily basis. A search for Havertz’s name brings us to an entry dated January 10, focusing mainly on Manchester United’s interest in Bruno Fernandes but including the following two paragraphs:

‘Another player United have discussed this month is Kai Havertz, Bayer Leverkusen’s 20-year-old midfielder. But as The Athletic has previously reported, Havertz is valued at €100million by his club and due to a dip in form this season, which was analysed by Raphael Honigstein here, it is believed United would prefer to wait until the summer.

‘A number of European clubs are monitoring his situation, however, Leverkusen would be reluctant to engage on a January transfer in any case.’

So two days after The Athletic reported that a player struggling for form is potentially wanted by Manchester United, but both buyer and seller want to wait until the summer, the same story is now being quoted as suggesting Liverpool have held talks with the player’s representatives.

Had a look on the Athletic, couldn't see anything regarding Liverpool meeting with agents etc of Kai Havertz 🤷‍♂️

Once a player has been linked with Liverpool and Manchester United in January, we’re always going to be hearing constant updates on the move, and Thursday brings with it a new revelation.

As another update from The Express is headlined: ‘Liverpool make contact over mega £107m Kai Havertz transfer and leapfrog Man Utd in race.’

One of the more curious aspects of the football media is how even the clubs themselves cannot resist the clicks generated by transfer speculation, and so Liverpool’s official website repeats the story with their own take: ‘Liverpool make Kai Havertz their top transfer priority.’

Of course, the story isn’t actually from The Express but rather linked back to Spanish outlet Mundo Deportivo, who report Liverpool are set to ‘bet heavily’ on Havertz with an offer of around €125million. You will be stunned to hear the trail of breadcrumbs doesn’t end there, however, with Mundo Deportivo citing ‘German media’ for the story.

Failing to mention exactly what publication the story comes from always raises eyebrows, but to be fair to Mundo Deportivo, the German media did actually report on this story, and from quite a credible source too. Indeed, on December 19, Bild did in fact suggest there had been ‘concrete talks’ between Liverpool and the player’s agent – albeit while mentioning Havertz’s representatives have also discussed a move with Manchester United, Manchester City, Bayern Munich, Real Madrid and Barcelona.

You’d think The Express would have known that, given they reported the story at the time, among with basically every other publication covering football in England.

So there you have it, a story that’s a month old that hasn’t changed gets repeated, complete with a spurious mention of The Athletic along the way, ensuring the rumour has come full circle.

Let’s face it, Havertz is going nowhere this month. Everyone knows, but that won’t stop this lot: 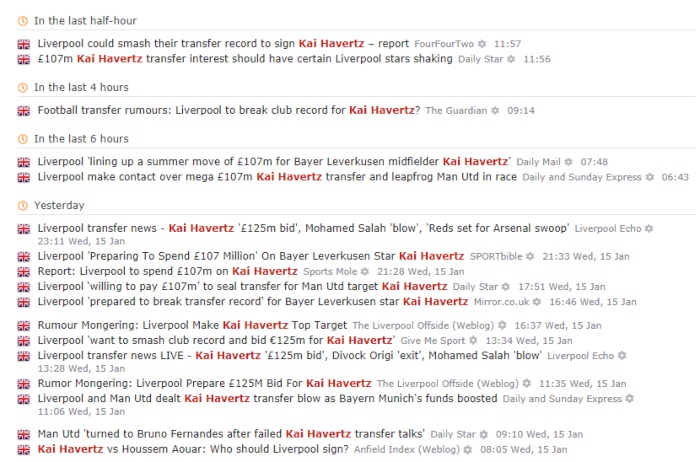