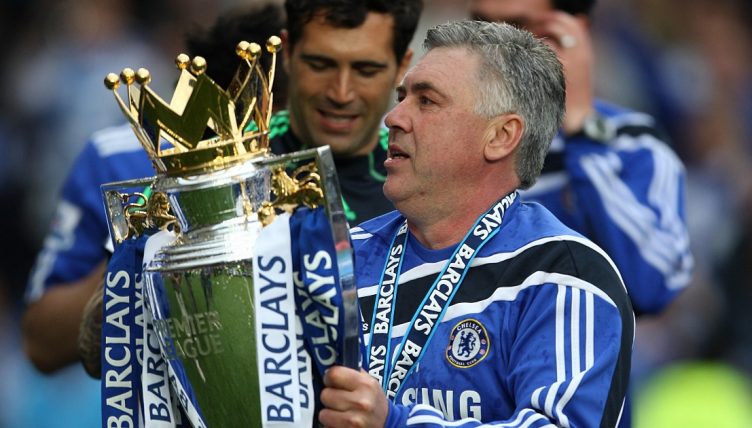 Carlo Ancelotti is the first and only manager to have lifted league titles in each of Europe’s five major leagues, having done so with AC Milan, Chelsea, PSG, Bayern Munich and Real Madrid.

The Italian coach led Madrid to their famous 10th European Cup, the fabled La Decima, back in 2014. But he couldn’t deliver the La Liga title during his first two-year stint in charge of Los Blancos.

On his return, however, he’s done just that. Last season, he led the club to a Champions League and La Liga double for only the second time in the last 50 years.

Ancelotti’s Milan were arguably the best side in Europe in the mid-noughties, a claim underlined by three Champions League finals in five years, winning two.

But they never quite dominated Italy as they might have, with just one Scudetto during Don Carlo’s eight-year tenure.

That title came in a memorable 2003-04 campaign, when they were reigning European champions having got one over the Italian champions Juventus with a penalty shootout in something of a snoozefest Champions League final the year before.

Milan were arguably at their very peak that season but they suffered a shock exit in the Champions League quarter-finals after an inexplicable 4-0 collapse against Deportivo La Coruna.

The following year Milan finished second, seven points behind Juventus –  who were later stripped of their title following the Calciopoli scandal – and suffered heartbreak in the Champions League final in Istanbul.

If anyone else had scored this, we'd have thought it was a cross. With Sheva, though, you could be pretty sure he was going for goal.pic.twitter.com/2maqpdYzCQ

It’s difficult to make any serious argument against Jose Mourinho’s Chelsea of 2004 to 2006 being the club’s best-ever side, given their ridiculous defensive record and dominance. It also remains the only time in the Premier League era they retained the title.

But you can certainly argue Ancelotti’s Chelsea were their most fun side.

In 2009-10, the Italian led them to a historic double. They stopped Manchester United from winning a fourth successive league title by a point, and swashbuckled their way to the Premier League trophy. They scored 103 league goals, a record at the time, and sealed it in style with an 8-0 victory at home to Wigan on the final day.

Ancelotti’s second and final season at Stamford Bridge wasn’t quite as successful. United reclaimed the throne, finishing nine points ahead, as the Blues finished trophyless. The boss was sacked unceremoniously just minutes after the final whistle of the final game at Goodison Park.

“I was sacked here by Chelsea in the corridor down there,” explained Ancelotti in his first press conference as Everton manager years later.

“I think you have to put a little plaque there now: Here was sacked Carlo…”

Thiago Motta, Alex, Maxwell, Blaise Matuidi, Jeremy Menez and Javier Pastore were among the high-profile names signed by the newly-minted club that season, but not even the addition of Ancelotti could stand in the way of Montpellier’s miracle – as Olivier Giroud fired the relative minnows to their first and only Ligue 1 title.

Zlatan Ibrahimovic, Lucas Moura, Marco Verratti, Ezequiel Lavezzi, Thiago Silva and briefly David Beckham arrived in the 2012-13 season, Ancelotti’s only full season in charge. Unsurprisingly they won the league at a canter, finishing 12 points ahead of runners-up Marseille, while Ibrahimovic marked his debut campaign in France with 30 league goals.

Madrid poached Ancelotti that summer following the departure of Jose Mourinho. The 2012-13 campaign marked a new era of domestic dominance for the Parisiens – their first of four successive Ligue 1 titles and eight in 10 years.

The Bavarians did what they invariably did throughout the 2010s during Ancelotti’s one and only full season in charge – cruised to the Bundesliga title. Their fifth of ten-in-a-row.

In 2016-17, Bayern finished 15 points ahead of runners-up RB Leipzig. They spent all but three weeks top of the table. Robert Lewandowski scored 30 league goals, Bayern collectively scored 89 in 34 games, they went unbeaten at home and lost just twice.

Ancelotti’s more relaxed demeanour seemed to be a perfect palate cleanser for the Bayern squad after the intense micro-managing of his predecessor Pep Guardiola.

But eventually it appeared that the players wanted a more hands-on coach once again and Ancelotti was sacked a couple of months into his second season, following a 3-0 Champions League group stage defeat to PSG.

“Players want to be improved. Every single player improved under Guardiola. And every single player has not improved Ancelotti – it’s just a manager who doesn’t do much. And that’s not enough for this Bayern team,” German journalist Raphael Honigstein told BBC Radio 5Live.

Bayern president Uli Hoeness said: “As coach, you can’t have your most prominent players as enemies. In my life, I’ve learned a saying: the enemy in your own bed is the most dangerous. That’s why we had to act.”

Hoeness added: “The fact [is] that, in my view, in the past few days the coach turned five important players against him,” seemingly in reference to benched quartet Arjen Robben, Franck Ribery, Jerome Boateng, and Mats Hummels, plus one other – believed to be Thomas Muller.

READ NEXT: A brilliant XI of players left out of Ancelotti’s best XI he’s coached