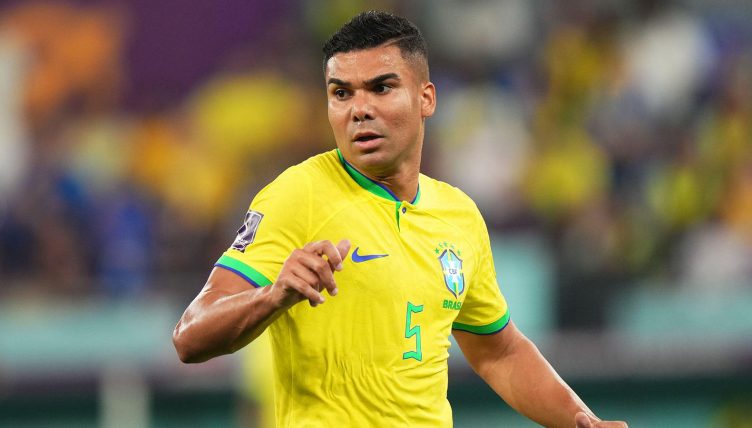 It’s not taken Casemiro long to settle in at Manchester United and he is once again proving his worth to the Brazil squad in the World Cup this year.

Looking through Casemiro’s trophy cabinet he is one of the most decorated players in world football. Throughout his time with Real Madrid, he won a whopping 18 trophies.

Being a five-time Champions League winner is something that only a handful of players can boast. He is without a doubt one of the best holding midfielders we have seen in the last decade.

At 30 years old now he doesn’t seem to be slowing down either. He will be desperate to be victorious with Brazil in the world’s biggest stage.

Casemiro has won silverware with his nation before as he played a key role in Brazil’s 2019 Copa America triumph as they saw off Peru 3-1 in the final.

United boss Erik ten Hag has been quick to praise the role the Brazilian midfielder has played at Old Trafford during the season so far.

“I call him the cement in the midfield,” Ten Hag told the official club website in October. “I think in and out of possession, he makes such a difference and he gives the team [an] extra edge and helps them dominate.

“I say in and out of possession because he can dominate games and he gives the team [that] extra edge to help dominate in the game.

“He can also read the game and he helps the players by pointing them into the right positions,” added Ten Hag. “He is anticipating both in and out of possession and also he sees the pass between the lines.

“He is a top player and I am really happy to have him here.”

Casemiro has already racked up 18 appearances for United and is playing a key role in the Brazil set-up in Qatar. We’ve picked out seven stats which showcase just how good he has actually been.

– Casemiro won more tackles against South Korea (five) than any other Brazilian player on the pitch.

– He has won more interceptions than any other Brazilian player at the World Cup (six). The United midfielder has also blocked more shots (two) and passes (four) than any other player in the Brazil squad.

– Casemiro managed to score against Switzerland despite having an xG of just 0.09 in the match – a hell of a strike.

Brazil were struggling to break down Switzerland.

– United have averaged two points per game in the Premier League matches that Casemiro has started in. If they averaged that tally all season they would finish with 76 points.

– Ten Hag’s side have a win percentage of 63 per cent in the Premier League when Casemiro has featured for them.

– Of his last 14 starts for club and country, Casemiro has registered 11 wins, two draws and just one defeat.

READ NEXT: 5 Man Utd players that will benefit from Cristiano Ronaldo’s departure

TRY A QUIZ: Can you name Man Utd’s top 30 goalscorers in PL history?