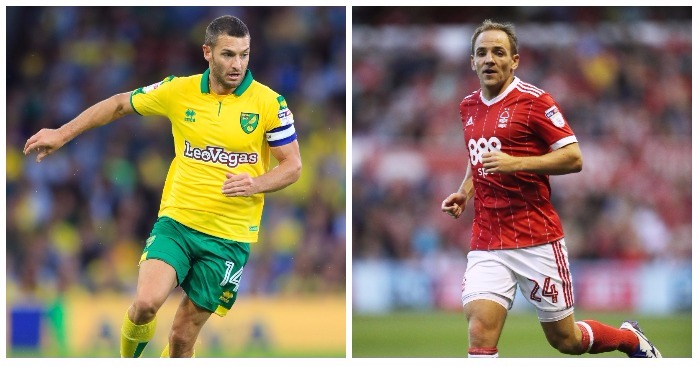 Leeds United lead the way in the Championship table, but Norwich City, Nottingham Forest, Sunderland and Derby County players are impressing when it comes to some of the individual statistical rankings in the division.

It may be slightly too early to start paying too much attention to the table with the majority of the sides in the league still having played only eight matches, but players are starting to settle into form.

Bristol City’s Bobby Reid is somewhat of a surprise name at the top of the goalscoring charts having bagged six goals to date, while Nottingham Forest’s Barrie McKay and QPR’s Luke Freeman lead the way in terms of assists with four apiece.

And we’ve taken a look at some of the finer statistical details across the Championship, ranking the top 10 players in chances created, successful dribbles, pass completion, interceptions, aerial duel success and most tackles.

Interestingly, despite registering the most assists in the division, neither McKay nor Freeman are among the 10 players to create the most chances per 90 minutes, suggesting they have some sharp finishing from their team-mates to thank for their impressive tallies.

Only players to have appeared for more than 180 minutes have been included, with Norwich City veteran Wes Hoolahan leading the way, although his efforts have only been rewarded by two assists so far.

Sone Aluko, who swapped Fulham for Reading last month, has created an average of four chances per 90 minutes, yet his team-mates have failed to score from any of those.

Since switching to Sunderland from West Brom, Callum McManaman has struggled to get fully fit and only just qualifies for this list have played 182 minutes in the Championship this term.

However, the winger has still managed to show glimpses of his talent, completing on average 4.9 dribbles per 90 minutes, more than any other player in the division, while he has also registered two assists in only three appearances.

Hoolahan and Aluko appear again, while McKay also makes the top 10, perhaps suggesting where his impressive tally of assists comes from.

Passing completion statistics should possibly be taken with a pinch of salt given they don’t take into account the difficulty of each pass attempted. As such, it is possibly no great surprise to see Nottingham Forest’s David Vaughan – the definition of a ‘steady midfielder’ – top the list.

Southampton will be encouraged to note that Harrison Reed, on loan at Norwich, also impresses in this regard.

Moving on to the defensive side of the game, these statistics can often be skewed depending on how each team plays, and how much time they spend defending.

Interceptions nevertheless suggest a player has a good reading of the game, and Derby’s experienced defender Chris Baird leads the way, although he only just qualifies having played two full matches for the Rams.

Again, these stats can be distorted depending on how direct a team plays.

Birmingham City may be struggling and Harry Redknapp may have been sacked, but his summer signing Cheikh Ndoye has at least brought a physical presence to midfield, while the rest of the top 10 is dominated by strikers.

Somewhat surprisingly, this list is not made up solely of defenders and central midfield players.

In Bryan Oviedo, Sunderland have another player topping a category despite struggling for regular game-time, while attack-minded players such as Adam Hammill, Albert Adomah and Massimo Luongo display an appetite for getting stuck in.

10 footballers who impressed at other sports: Maldini, Batistuta, Dudek…