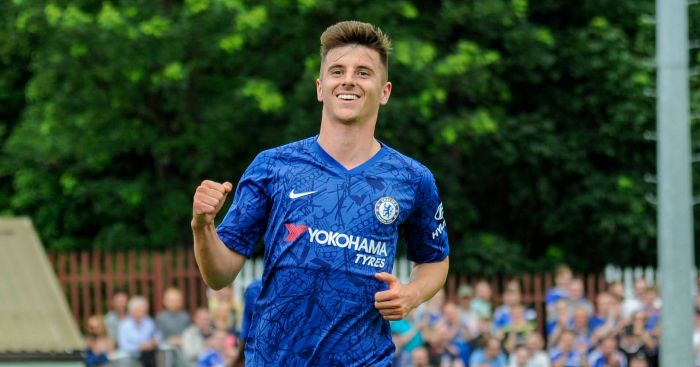 No matter what’s going on at Chelsea, they seem to accumulate silverware. They’ve won the lot since Roman Abramovich took over in 2003, and no English clubs have won more in that time.

But away from the first team, there have been a couple of running themes. On the one hand, the club produces talent that excels at youth level, winning seven of the last 10 FA Youth Cups, but such starlets rarely have a chance to break into the first team. Meanwhile, the club has an extensive army of loanees, with dozens sent out every year.

New manager Frank Lampard has been given a remit to develop the talent, as he did at Derby, while his assistant and fellow Chelsea old boy Jody Morris has a proven track record in coaching younger players. With a transfer ban, now could finally be the time to have a look at some of the players on the fringes – here’s who stands out.

Mount’s career trajectory – excellent at Vitesse Arnheim, even better under Lampard at Derby – suggests that now’s the time for him to break into his parent club’s senior set-up.

Especially given his performances in pre-season: he notched against Irish side St. Patrick’s Athletic and then added a brace in the friendly against Reading. He was arguably Lampard’s most important player as the Rams reached the play-off final last season, and has the ability to make himself similarly indispensable at the highest level.

With Alvaro Morata at Atletico Madrid, Gonzalo Higuain unfancied after an underwhelming loan stint, and doubts over Olivier Giroud’s ability to play consistently in a league campaign, there could finally be opportunities for Tammy Abraham at his parent club. In pre-season, he stepped up to score the opener as Chelsea beat Barcelona 2-1.

He’s got an exceptional record in the Championship, scoring 23 goals for Bristol City a couple of years back, and getting 25 to help fire Aston Villa back to the Premier League last year.

An underwhelming Premier League stint at a dysfunctional Swansea can be excused. Simply put, Abraham’s shown enough to be given a chance.

Tomori has been linked with moves away, and faces tough competition to break into the team, but he was voted Derby’s player of the season playing under Lampard, and wouldn’t be a bad option to fill the squad slot vacated by Gary Cahill.

Tomori’s been given chances in pre-season, starting in the backline as Chelsea beat St. Patrick’s Athletic 4-0 and Reading 4-3 (two of Reading’s goals came after he was substituted), as well as being brought on against Barcelona and RB Salzburg.

The Frenchman looked set for a great future when he bucked a trend at Chelsea and actually got given chances as a teenager under Jose Mourinho. But it’s been a funny few years since after suffering an anterior cruciate ligament injury in his right knee in 2016, going on to be relegated whilst on loan at Stoke before impressing at Everton.

The Toffees are reportedly keen to bring him back to Goodison Park, but there’s every chance he could be brought back into the fold at Chelsea. He’s featured in all six pre-season friendlies so far.

The full-back’s stock has managed to rise despite not actually featuring for Lampard’s side this summer. He needed surgery after all to fix the ankle ligament injury he suffered at the start of the summer while playing for England U21 at the Toulon Tournament, after a stellar breakthrough season on loan at Wigan.

The Independent report that the Blues have knocked back Crystal Palace twice in their attempts to sign the 19-year-old, while there were suggestions that Lampard is planning to put him ahead of Davide Zappacosta in the pecking order. He’s very much in his manager’s plans.