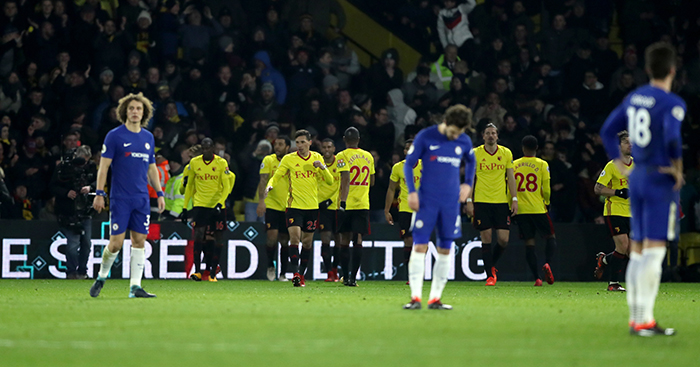 Chelsea have now won only two of their 10 games in all competition since the turn of the year – but just what has gone wrong for Antonio Conte and his team?

The Blues were handsomely beaten 4-1 by Watford at Vicarage Road on Monday and are now fourth, some 19 points behind Manchester City at the top of the table.

To put that into perspective, they are as close to Everton in 10th as they are to first position.

But just how bad have Chelsea been in the league in comparison to last season? Well, the answer is very bad.

They have 13 points less than at the same stage and 20 points fewer in the corresponding fixtures – comfortably the worst in the division. 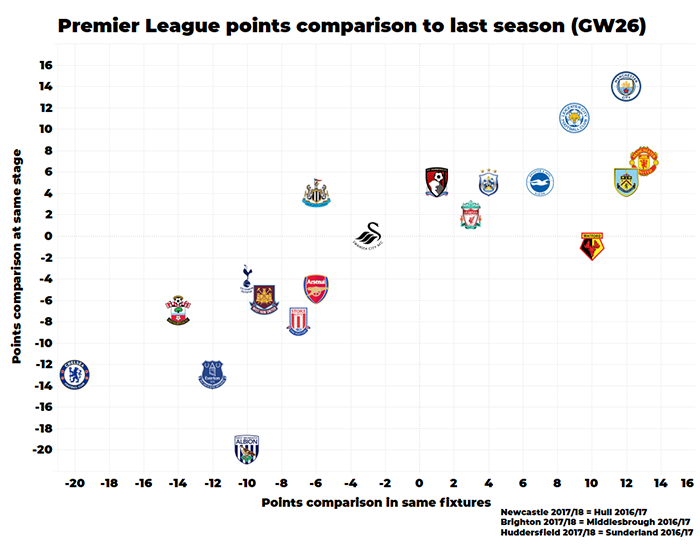 An obvious problem for Chelsea this season has been the additional matches they have had to play.

Last season, with no European games to contend with, the Blues could afford to concentrate on the league and name a consistent, settled starting XI, nine of which played over 75% of the available minutes in the Premier League: Courtois; Azpilicueta, Luiz, Cahill; Moses, Kane, Matic, Alonso; Hazard, Costa, Pedro.

This season, with more games and extra rotation, only five have played over 75% of the available minutes in the league: Courtois, Alonso, Azpilicueta, Kante and Bakayoko.

Participation in the Champions League, coupled with a run to the League Cup semi-final has brought an extra burden onto the squad. 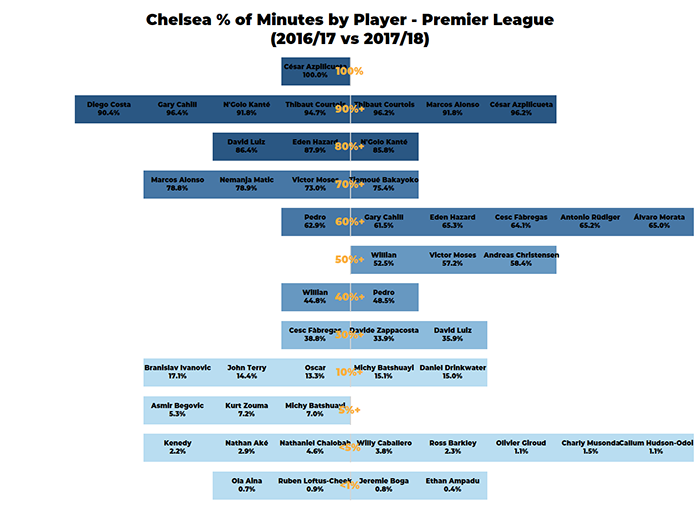 In the entire 2016-17 campaign, Chelsea played only 47 games across all competitions.

The Blues have already played 39 so far this season, meaning even if they were to get knocked out at the next stage of the Champions League and FA Cup, they’ll have played 54 matches.

It’s clear from results recently that they’ve not been able to cope with the extra workload. This has seemed to influenced Chelsea’s injury list as well, with several first teamers enduring time on the sidelines this season.

With Alvaro Morata out injured and Michy Batshuayi not trusted by Antonio Conte, Chelsea have shaped up with a false-nine front three recently, with Eden Hazard at the tip.

Monday’s game at Watford was the fifth time the Blues have used the formation in the Premier League this season, but it has not brought them much success:

In five matches in which they will have been favourites, Chelsea managed two victories, a draw and two defeats. They scored only five times and conceded seven.

Playing with a false-nine means you have to play the ball through midfield and into the feet of the strikers, as going long will just result in giving the ball back to the opposition. Unfortunately for Chelsea, they are struggling to play this way at the moment.

Conte clearly recognises it too, having signed Olivier Giroud from Arsenal on deadline day at the end of a month-long chase for a back-up target man.

Hazard, however, has been hamstrung in the meantime. He has only a single goal and an assist when used in the role this season.

He is forced upfield and often doubled or even tripled up on by the defence, but if he drops deep to get the ball, it leaves a severe lack of presence upfront.

Last season’s success was built upon a front three of Hazard-Costa-Pedro. Conte must be hoping he can get Morata back to full fitness quickly, so he can reinstate his favoured formation with a more natural central striker and get the best out of his star man.

Teams have worked them out

On Monday night, Watford pressed high up the pitch, forcing mistakes and either winning the ball back in dangerous areas or forcing Chelsea to play long to the aforementioned Hazard, who is clearly ill-suited to contesting such balls.

They are not the only team who seem to have worked out how to beat this Chelsea side. Many simply sit deep, frustrate them and then hit on the break with fast forwards.

Teams are often happy for Chelsea to have the ball out wide with their wing-backs, while they make the middle of the pitch compact and reduce the space that Hazard, Willian and Pedro have to work in.

Bournemouth provided a perfect example of this in their recent 3-0 win at Stamford Bridge:

You can see how deep their back three are sitting, just outside of the penalty area, leaving no room behind. They are also fairly narrow, blocking off any routes between them and the goal.

The midfield two (No’s 4 & 16) are also very narrow, so it’s clear to see their game plan was about restricting passes through the centre of the pitch. It worked to perfection.

There’s also an apparent lack of Plan B with Chelsea and a growing feeling that if they don’t score first, they are going to struggle.

So much of Conte’s tactics revolve around getting a lead and then hitting sides on the counter-attack. They scored a league-best seven goals via this route in the 2016-17 season, but incredibly they’re yet to score a single counter-attacking goal this time around.

It seems that teams have cottoned on to what Chelsea are good at and worked out how to stop them effectively.

Furthermore, their three most-used substitutes (Willian – 12, Batshuayi – 9 and Zappacosta – 8) have only contributed five goals and two assists between them when coming off the bench. They need more replacements who can make an impact.

With Chelsea still in the top four, the FA Cup and Champions League knockout stages, there is still hope for the rest of the season. But with Antonio Conte’s future looking more and more precarious with every passing match, they need to improve and fast.