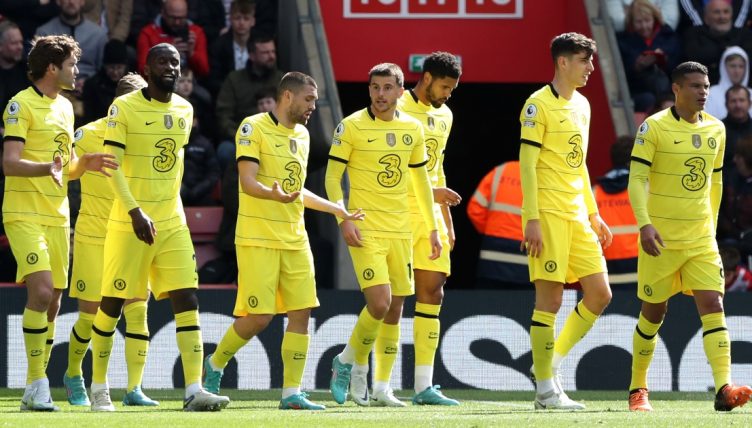 The season looked in danger of unravelling for Thomas Tuchel’s men following their shock 4-1 defeat at home to Brentford last weekend and their 3-1 loss to Real Madrid in midweek.

Tuchel suggested that the tie is over against Real Madrid, while had they failed to win at St. Mary’s they may well have looked over their shoulder at the likes of Tottenham in terms of a top-four place.

But they produced a strong response with one of their best performances of the season against Ralf Hasenhuttl’s side – a display that may give them some confidence of going to the Spanish capital and producing something special on Tuesday evening.

Chelsea raced into a three-goal lead inside just 21 minutes. They went into half-time having killed the game, four goals up, and added another two in the opening 10 minutes of the second half.

Timo Werner and Mason Mount scored two apiece, while Marcos Alonso and Kai Havertz also found themselves on the scoresheet.

The final half-hour appeared more like a training exercise as Chelsea took their foot off the gas, settled for six, and appeared to conserve their energy ahead of Tuesday’s task.

“By winning the challenges, we had chances to be dangerous in offensive transition and not only in ball possession. That was a good mix in all areas of the pitch. In all areas, it was very good,” Tuchel told reporters in his post-match press conference (via football.london).

“I think it tells us that we are not the team to escape with results if our input isn’t 90% of commitment and investment.

“We are a special group when we have our priorities right. If we are committed, defend with courage, have the attitude right and hunger right, this is our foundation to show the quality.”

Here are 12 of the most impressive stats from Chelsea’s big win:

– Chelsea have equalled their longest-ever record of successive away wins in all competitions – seven. Up next? The Bernabeu.

– This was the earliest any Premier League side has taken a four-goal lead in over a decade. The last time a side were four goals so early was also Chelsea, with four goals in 27 minutes, in October 2011 – that ended up 5-1.

– Never before in Premier League history had Chelsea scored three goals in the opening 21 minutes of a match (via @OptaJoe).

– On five different occasions this season, Mason Mount has both scored and assisted in the same match. No player in the division has done so more frequently – he’s level with Liverpool’s Mohamed Salah in that regard.

– This was Chelsea’s joint-record away win in the Premier League. It’s also the joint-fourth biggest away win in Premier League history. The only away wins via a bigger margin are Leicester’s 9-0 win at Southampton in 2019, Manchester United’s 8-1 win at Nottingham Forest in 1999, and Liverpool’s 7-0 win at Crystal Palace in 2020.

– Chelsea’s xG was 4.31 to Southampton’s 0.65 (via @xGPhilosophy). While the actual score overperformed that, it’s still the biggest xG and xG difference Tuchel’s Blues have enjoyed in a Premier League game this season – stats via FBref.

– On 21 different occasions in the Premier League, Southampton have conceded four or more goals in a single half. A third – seven – of those occasions have come with Hasenhuttl at the helm. At least it’s not 9-0 this time, Saints.

🗣 “Could have scored more.”

– Chelsea registered 14 shots on target. Saints registered just one. Fraser Forster made eight saves as well as conceding six goals, while Edouard Mendy only needed to make one save.

– Marcos Alonso played five key passes – the final pass before a team-mate shoots at goal – which was more that Southampton managed combined.

– Antonio Rudiger completed 95 passes and Mateo Kovacic completed 94. That’s more than three times as many as Southampton’s top passer on the afternoon, Stuart Armstrong (30 passes). Reece James was introduced in the 63rd minute and completed more passes (39) than any player from the home side. Chelsea’s dominance saw them register 71% possession.

– Andreas Christensen (six) and Ruben Loftus-Cheek (five) won more aerial duels between them than Southampton did in total (eight).