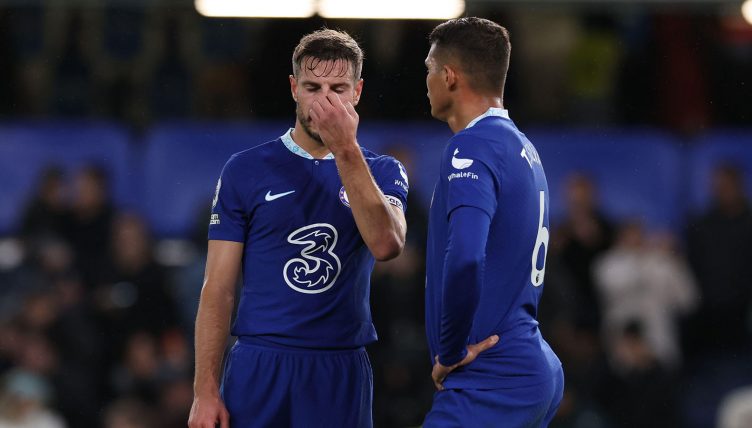 Chelsea have endured a disastrous season so far and Graham Potter now faces the huge task of turning the ship around.

Despite splashing over £200million in the summer transfer window, Chelsea have looked miles off the pace so far. Thomas Tuchel struggled at the beginning of the year before he was abruptly replaced by Potter.

Chelsea returned from the international break with a positive performance against Bournemouth, but they have struggled since. Now winless in three matches, the pressure is mounting on Potter.

Manchester City easily dispatched of Chelsea in the FA Cup as the away side only managed to register a single shot on target. The result even prompted some Chelsea fans to chant the name of Tuchel as their frustrations grow.

Following their lacklustre FA Cup display Potter told reporters: “We were second best to a very good side. Even though it was a cagey opening 20 minutes, we couldn’t attack the backline as much as we’d like. Man City did really well in terms of stopping us doing that, but still we struggled.

“The first half was painful and tough for us all. The second half we had to respond and there were some positives there in terms of the young players. But we’re disappointed to go out of the competition.

“This opponent is the worst opponent you can play when things aren’t going well because they can make it look like you aren’t trying. I’m working with the players and I don’t feel the sense of any players with a poor attitude.

“Everyone wants to try to do better but we’re going through a bad moment and in these moments, you need somebody to blame.

“We need to stay together as group, support each other, and I’m sure we will get the support of the supporters when we see good performances and results.”

He now has a tough job of getting the Chelsea fan base back on side and turning around their fortunes for the second half of the Premier League season.

– Chelsea have only scored 20 league goals this season. If they continue to score just 1.17 goals per game they will score just 44 goals all season, which is 32 less than they scored last season.

– At the same stage last season, Chelsea had 12 more points than they do this time around.

– This season Chelsea have averaged 1.47 points per game. If they were to continue with this average they would finish the season with 55 points which would be their lowest return since 2015-16 – when they finished 10th.

– Chelsea have failed to score in six of their last eight matches – during that time they have only scored three goals.

– In the Premier League, Chelsea have taken an average of 10.9 shots per game which is the 16th-lowest tally in the league.

– Raheem Sterling has averaged 1.3 shots per game this season – lower than any of his previous tallies with Manchester City.

– Chelsea have only created 27 big chances this season, which is fewer than any other club in the top half. Former Chelsea man Kevin De Bruyne has created 18 on his own for Manchester City, to put that in context.

"We are really far from where we want to be" 😩

– In the Premier League, Chelsea have lost six of the eight matches where they have fallen behind.

– They have not scored a single league goal past the 90th minute in stoppage time this season.