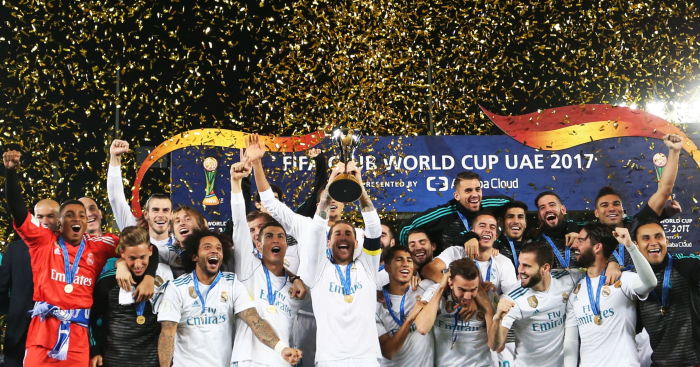 Remember the World Cup? It’s back — in club form! And since there are no English teams competing, this is who you should support at the Club World Cup.

You might have missed it, but the most important competition in club football kicked off on Wednesday.

Not the Champions League, of course, but the 2018 FIFA Club World Cup, a contest that pits the champions of the six continental confederations against one another.

A cracking 3-3 draw between Al-Ain and Team Wellington signalled the beginning of the contest, and three more rounds of the competition will take place before the best side on the planet is crowned at the hallowed Zayed Sports City Stadium.

Unfortunately, following the Club World Cup can be a tricky business.

Several games will be played on weekday afternoons, and no UK broadcaster has actually bought the rights to the competition.

More than that, many casual fans won’t be familiar with some of the teams involved. New Zealand’s Team Wellington, for example, are a semi-professional club with only a handful of players who have Wikipedia pages.

Don’t despair, though. The 2018 Club World Cup has a second team for everyone, and this handy guide will help you choose yours.

Will it be Kashima Antlers? Al-Ain? Maligned underdogs Real Madrid? Read on to find out.

With the United Arab Emirates hosting this year’s Club World Cup, Al-Ain qualify by virtue of their domestic success in the UAE Pro-League. And they’ve already shown their credentials by beating Team Wellington on penalties.

The team is spearheaded by Swedish international striker Marcus Berg, for many years the Robin to Zlatan Ibrahimovic’s Batman.

Berg has a strike rate of more than a goal per game for his club, which is good, but not quite as good as former striker Asamoah Gyan, whose four years with Al-Ain saw him become the second-highest scorer in their history.

Sunderland have been varying shades of crap since Gyan left for the Middle East, so Al-Ain should be popular in Newcastle.

For fans of: Manchester United

By the time you read this, Team Wellington may already be back to their day jobs in New Zealand, having failed to overcome Al-Ain in the first round.

But don’t think you can’t support Team Wellington just because they’re out.

To reach the Club World Cup, the semi-professional club overcame Fiji’s Lautoka 10-3 (agg.) in the final of the OFC Champions League.

They do rugby there.

For fans of: Wigan Athletic

Midfielder Anice Badri, who finished as the competition’s top scorer, was part of the Tunisian XI that nearly held England to a draw at the World Cup.

They have an interesting history, too. Former players include Nigerian striker Julius Aghahowa, who bossed it on Football Manager and went a year and a half without scoring at Wigan.

The club celebrate their 100-year anniversary in January. And victory at the Club World Cup would be a lovely way of honouring that milestone, wouldn’t it?

Japanese side Kashima Antlers almost won the bloody thing in 2016, losing the final to Real Madrid in extra time. They now have a second shot at glory after winning the AFC Champions League this year.

The club are Japan’s most successful team and are named ‘Antlers’ because Kashima sort of translates as ‘Deer Island’.

At present, Kashima have three Brazilians in their squad, as well as 39-year-old midfielder Mitsuo Ogasawara, who has been with the club for 20 years and played for Japan at the 2002 and 2006 World Cups.

For fans of: Fulham, Arsenal

Commonly known as Chivas, Mexican side C.D. Guadalajara won this year’s CONCACAF Champions League after being Toronto in the final.

Veteran defender Carlos Salcido, who played for Fulham between 2010 and 2011, captains the team.

Guadalajara was also where Javier Hernández learned to do backwards headers before joining Manchester United, and where Carlos Vela played as a kid before becoming a huge disappointment to Arsenal fans.

For fans of: Liverpool, West Ham

Smashing up an opponent’s team bus is technically a crime, but crime often pays. See: River Plate, who could soon become the best club in the world, despite finishing 8th in the Argentine league last season.

River made it here thanks to their belated win over Boca Juniors in the Copa Libertadores final, AKA the hipster derby, with striker Lucas Pratto boshing in the goals throughout that competition.

He could do so again when his side face Espérance or Al-Ain on Tuesday.

River actually came close to Club World Cup glory in 2015, but lost the final to Barcelona.

For fans of: Real Madrid

Winners in 2014, 2016 and 2017, Real Madrid usually clean up in this stupid, pointless competition. But their awful form at present might give Kashima Antlers a chance of redemption.

There’s no good reason for supporting Real Madrid, unless, of course, you already do.