Everything you need to know about Arsenal target Cody Gakpo 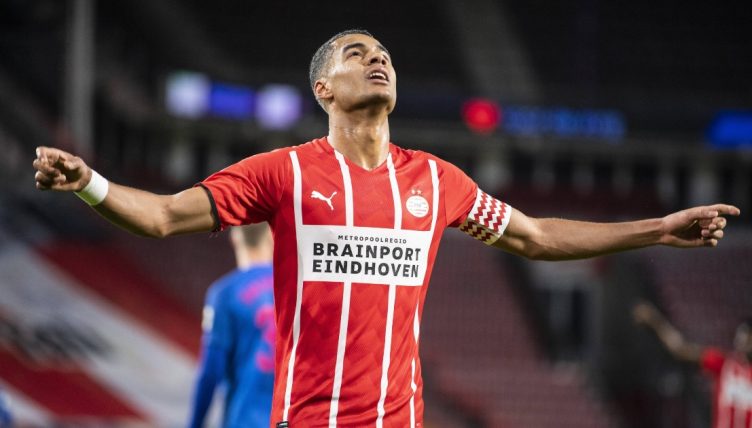 Arsenal will be looking to strengthen their squad this summer for their return to European competition, whether that’s in the Champions League or Europa League, and have reportedly targeted PSV Eindhoven winger Cody Gakpo.

Gakpo has scored 16 goals in all competitions, alongside 15 assists, in his 37 appearances so far this season that has kept the Dutch club in the hunt for their first Eredivisie title since the 2017-18 season.

Such form hasn’t gone unnoticed by some of Europe’s biggest clubs and it has been claimed that PSV would be open to selling Gakpo in the summer if they receive a suitable offer.

We’ve created a profile that contains everything you need to know about Arsenal’s latest transfer target.

PSV Eindhoven are known for their production of quality academy products, including the likes of Arjen Robben and Memphis Depay, and Gakpo looks set to follow in their illustrious footsteps.

Born in the city in May 1999, Gakpo joined PSV’s youth academy in 2007 and progressed through the club’s various youth sides.

After making his debut for Jong PSV, the club’s reserve team, in 2016-17, Gakpo ended up scoring 17 goals in 26 appearances across three seasons for the side – illustrating his goalscoring potential.

He was selected in first-team matchday squads by PSV boss Mark van Bommel and made a scoring debut during a 4-0 win at Excelsior in September 2018.

Gakpo would make his proper breakthrough during the following campaign, scoring seven goals and providing seven assists during 25 Eredivise matches – a goal tally that he matched in 2020-21.

His form couldn’t be ignored by the Netherlands national team and Frank de Boer included Gakpo in their Euro 2020 squad.

He wasn’t a starter during the tournament but appeared as a substitute during Netherlands’ 3-0 win over North Macedonia – which also marked his international debut.

Gakpo has made three further appearances for the national side, scoring his first goal during a 4-0 win over Montenegro in September 2021.

The 22-year-old does not have a set asking price but it’s expected that Mikel Arteta’s side could land the Netherlands international for £35m, according to The Athletic.

The winger, who has been compared to Mohamed Salah and Sadio Mane by some observers, was heavily linked with a move away in January but, after a deal failed to materialise, Gakpo penned a contract with the Dutch outfit until 2026.

He has since helped guide PSV to within two points of league leaders Ajax.

A product of the famous PSV academy, Gakpo loves to cut in from the left flank and onto his preferred right foot.

Gakpo is versatile, unpredictable and his footwork makes him almost impossible to mark. His flexibility means he can play anywhere along the front line, including as a striker, although he is normally stationed on the wing.

He’s blessed with excellent spatial awareness, but it’s Gakpo’s instinctive dribbling that sets him apart from his other counterparts within the league.

It only appears to be a matter of time until he moves on and plays his football in one of Europe’s top leagues. Although, as some observers have pointed out, parts of his game can still be improved.

“If you look at Liverpool players like Mane and Salah, he still has a lot to learn,” PSV Director of Football John de Jong told Dutch newspaper De Telegraaf. “They are not only great footballers, but they also defend, Gakpo still has to improve on that point.”

Arsenal are one of several clubs interested in signing Cody Gakpo this summer. He's rumoured to be priced around £30m to £42m. (@Football_LDN) #afc pic.twitter.com/5isMMdxky6

“My goal is to keep him for the season at all times. I don’t know how long we can keep him out of the hands of the big clubs in Europe. How he performs is the most important thing.

“Gakpo will of course not stay in Eindhoven forever,” De Jong continued. “He will go to a top club in a top league in the future. Or will that happen next summer? That’s hard to say.

But Dutch football legend Marco van Basten warned Gakpo about leaving the Eredivisie before he was ready.

“He has been in the Eredivisie for a year now,” Van Basten told Voetbal4U in January. “You have to have a basis to succeed abroad. That is three, four years in the Netherlands.

“Then you’re just a bit stronger, a bit better prepared for the higher level abroad – because it all goes much harder and faster. But nowadays, they all want to leave after one year.

“The sooner you leave, the greater the chance of not succeeding. If you don’t succeed in those two, three years, then you go to another club that is less. Then your career is going to look very nasty.”

“Fine feeling for the ball, a good through ball, dribbles and is strong between the lines. I really enjoy him. He is going to be an important player for the Dutch squad.

“He is ready to be in the base of the Dutch squad. I would definitely draft him. There are other options, but they are not as effective as him.”

Meanwhile, PSV teammates Armando Obispo and Jordan Teze stated how proud they were of Gakpo’s progress.

Obispo told a Dutch outlet Voetbal International in January: “To be honest, I expected him to become so good, but not for his development to go so fast that he could already show it to the Dutch national team.

“But we are on the pitch with him. every day; we know what Cody can do.”

Teze added: “Cody is having a good season and we still have a ways to go.

“There are good things coming for him. It’s great that his name is linked with big clubs like Manchester City and Liverpool. This is an example of how we want it in the end.”