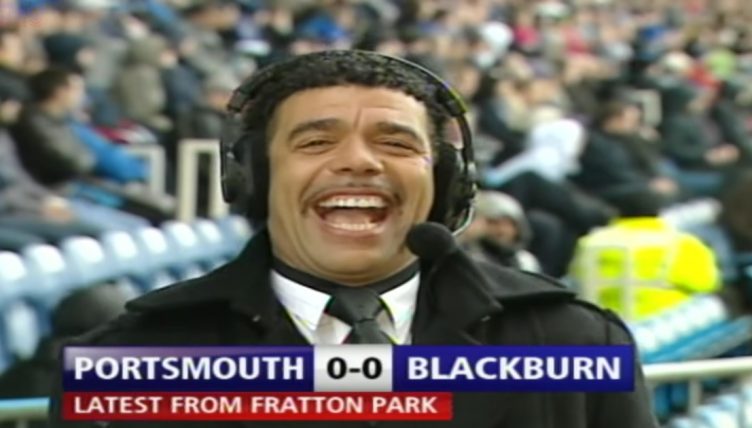 Being paid to talk about a football game might sound like the easiest job in history, but it’s not always as simple as you might assume – as this lot have proven over the years.

Many thanks to the Twitter account @C0LEMANBALLS and the book “Pulled Off At Half-Time” – Football’s Finest Quotes and Funniest Quips for the source material in putting this together.

Enjoy. And tweet us any we’ve missed out at @planetfutebol.

“It’s end-to-end stuff, but from side to side” – Trevor Brooking

“The Belgians will play like their fellow Scandinavians, Denmark and Sweden” – Andy Townsend

“Argentina are the second-best team in the world, and there’s no higher praise than that” – Ron Atkinson

“If history repeats itself, I should think we can expect the same thing again” – Terry Venables

“I would not say that he [David Ginola] is one of the best left wingers in the Premiership, but there are none better” – Ron Atkinson

“He’s not only a good player, but he’s spiteful in the nicest sense of the world” – Ron Atkinson

Who’s the bastard on your arm?

“Have a look at your ref, watch ”
– ROBBIE SAVAGE

“They’ve flown in from all over the world, have the rest of the world team” – Brian Moore

“The Italians are hoping for an Italian victory” – David Coleman

“If Glenn Hoddle said one word to his team at half-time, it was concentration and focus” – Ron Atkinson

“Glenn Hoddle hasn’t been the Hoddle we know. Neither has Bryan Robson” – Ron Greenwood

“And now we have the formalities over, we’ll have the national anthems” – Brian Moore

If you closed your eyes you couldn't tell the difference between the two sides.
– Phil Brown

Did they or didn’t they?

“Welcome to Bologna on Capital Gold for England vs San Marino with Tennent’s Pilsner, brewed in Czechoslovakian yeast for that extra Pilsner taste, and England are one down” – Jonathan Pearce

“Tottenham are trying tonight to become the first London team to win this cup. The last team to do so was the 1973 Spurs team” – Mike Ingham

Confidence seems to be draining away. You can invisibly see that.
– MICHAEL OWEN

“For those of you watching in black and white, Spurs are in the yellow strip” – John Motson

Some things stay the same…

“I came to Nantes two years ago and it’s much the same today, except that it’s completely different” – Kevin Keegan

Julian Dicks is everywhere. It's like they've got eleven Dicks on the field.
– Metro Radio

“Well, Clive, it’s all about the two Ms – movement and positioning” – Ron Atkinson

“Xavier, who looks like Zeus, not that I have any idea what Zeus looks like” – Alan Green

Steven Gerrard looks as though he's been playing for England all his international career.
– Trevor Brooking

More of a jog

“The one thing England have got is spirit, resolve, grit and determination” – Alan Hansen

And here’s to the main man, Chris Kamara.