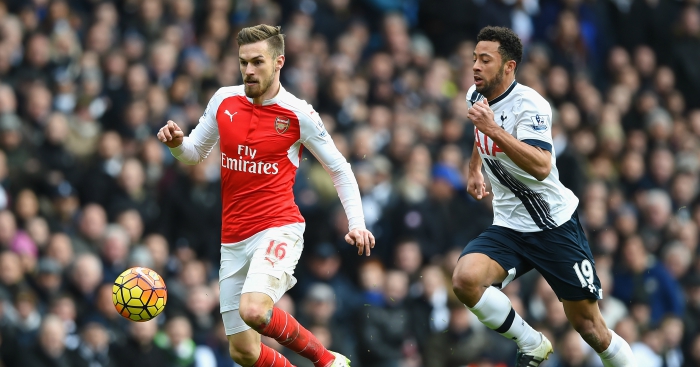 Arsenal face Tottenham this weekend in a North London derby which could prove vital in both teams’ attempts to break into the top four.

Both sides sit just outside the Champions League places, and with Chelsea struggling for form, now is the time to pick up points and close the gap.

Spurs are just one point behind Antonio Conte’s side, and a win would see them open up a seven-point gap between themselves and their opponents this weekend.

With key battles all over the pitch, we’ve picked the centre of the park and compared the stats of Mousa Dembele and Aaron Ramsey ahead of the clash at Wembley on Saturday.

Ramsey’s hat-trick against Everton last weekend means he now has six Premier League goals to his name from his 18 appearances this season.

He has also provided six assists for his Arsenal team-mates, with only eight players in the league managing more so far this term.

Dembele, meanwhile, has failed to score or provide an assist all season, having made a total of 19 appearances.

Dembele has completed an average of 61.3 passes per 90 minutes of Premier League football so far this season, with a success rate of 92.3%.

Ramsey averages significantly less, with 52.4 successful passes per 90 minutes, while his completion rate is 85.8%.

Despite failing to register an assist, Dembele does make an average of one key pass per 90 minutes, while Ramsey averages 1.3.

And the fact that Dembele hasn’t scored yet this season might be down to the fact that he has only taken 10 shots, at a rate of 0.7 per 90 minutes, while Ramsey averages 2.9.

Quite impressively, Dembele has only failed with four of his dribbles in all competitions this season.

The 30-year-old completes 3.0 successful runs per 90 minutes in the Premier League, with a 90.9% success rate.

Meanwhile, Ramsey averages just 1.3 successful dribbles per 90 minutes, with a success rate of 80%.

The Welshman also loses the ball more frequently – he averages 2.3 unsuccessful touches and is dispossessed 1.4 times per 90 minutes.

Dembele takes just 1.1 unsuccessful touches per 90 minutes but is dispossessed an average of 1.8 times.

Dembele is unbelievable at dribbling/ball control but at some point has to start scoring more for us.

Ramsey is more keen defensively than Dembele, attempting 3.8 tackles per 90 minutes but with a success rate of just 47.5%.

Dembele is also more useful when it comes to interceptions, making 1.7 per 90 minutes so far this season, while Arsenal’s No.8 makes 1.2.