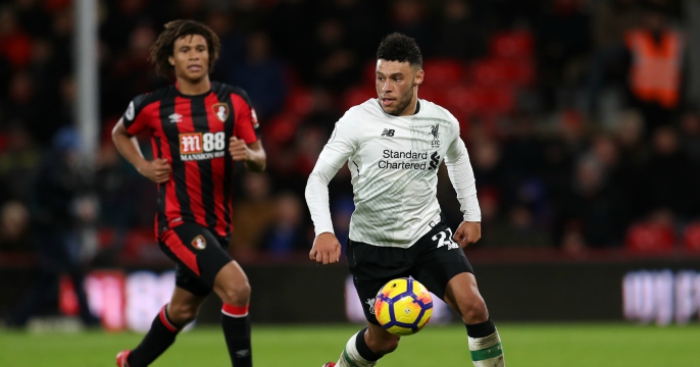 It has taken Alex Oxlade-Chamberlain time to settle in at Liverpool following his move from Arsenal, but a new leaf may have been turned in recent weeks.

Oxlade-Chamberlain, who is still just 24 years of age, arrived at Arsenal in 2011 with much promise, and many are beginning to believe that could be fulfilled thanks to a fresh start at Anfield.

The England international is getting more and more game time with Jurgen Klopp rotating his squad, and fans and pundits alike are taking notice of the midfielder after some impressive displays, with his performance in the 4-0 thrashing of Bournemouth the most recent example.

We decided to delve deeper into the stats to determine just how important Oxlade-Chamberlain is to Liverpool, using metrics per 90 minutes in the Premier League where applicable to compare him to his fellow Liverpool midfielders.

In his five starts and 10 substitute appearances in the Premier League, Oxlade-Chamberlain has had a hand in three goals (one goal, two assists), the same number as Emre Can, who has played almost 400 more minutes than his counterpart.

Unsurprisingly, Philippe Coutinho leads the way in this category, with five goals and five assists to his name in the so far this term.

Jordan Henderson and Georginio Wijnaldum, who have both made 14 starts and one substitute appearance, have each scored one and assisted one.

Remember when people judged Oxlade-Chamberlain after only a handful of cameo performances – in a new environment; under a new manager, with a completely different philosophy.

Look at him now.

When it comes to chances created, Oxlade-Chamberlain is once again second only to Coutinho.

The Brazilian averages 3.2 key passes per 90 minutes of football played in the Premier League so far this season.

Alex Oxlade-Chamberlain helping Coutinho answer when they asked him again regarding him leaving.

In Sunday’s victory over Bournemouth, Oxlade-Chamberlain left the field having made four successful tackles, more than any other player on the pitch.

He currently averages 1.9 tackles per 90 minutes played in the Premier League, with Can and Henderson only slightly ahead of him with 2.1 and 2 respectively. Coutinho, meanwhile, averages 1.6 and Wijnaldum just 0.8.

The 24-year-old also leads the way in interceptions with 1.7 per 90 minutes.

Can, who has also featured in central defence this season, averages 1.4 interceptions, while Wijnaldum and Henderson average 1 and Coutinho 0.8.