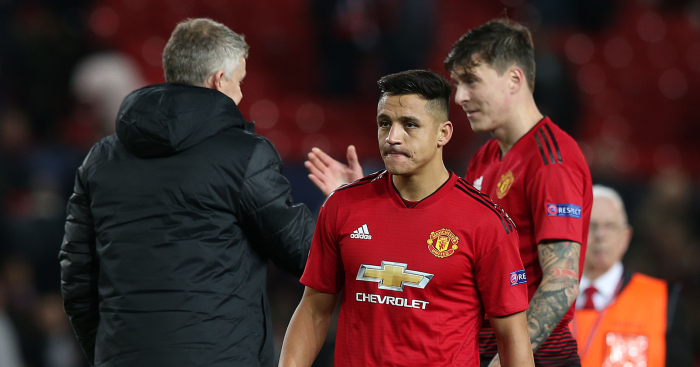 It’s now over a year on from Alexis Sanchez’s move from Arsenal and the forward continues to struggle to rediscover his best form for Manchester United.

Sanchez has come in for plenty of criticism since swapping north London for Old Trafford, with many fans doubting whether he will ever replicate his performances for the Gunners with United.

We’ve compared his 2018-19 Premier League stats to those from his most productive season at Arsenal, 2016-17, to see just what has changed.

In that 2016-17 campaign, Sanchez scored 24 times and provided a further 10 assists in 38 Premier League appearances – coming at a rate of a goal or assist every 94.8 minutes.

Due to form and fitness issues, the 30-year-old has appeared in 14 Premier League matches this term, but only six have been as starts.

In that time, Sanchez has scored once and provided three assists, at one every 153.8 minutes.

#MUFC boss Ole Gunnar Solskjaer says Alexis Sanchez in front of goal is like "the bottle of ketchup you can't get to come out, and once it does he'll be fine."

Sanchez may feel aggrieved to have only recorded three assists this season given he has created an average of 2.8 chances per 90 minutes – which is actually the highest figure in Manchester United’s squad.

And that figure is also higher than he registered for Arsenal in 2016-17 when he created an average of 2.2 chances per 90 minutes.

At United this season he has averaged 1.5 successful dribbles per 90 minutes, a 50% completion rate of those attempted.

That is half the number he completed in that campaign for Arsenal when he also recorded a higher completion rate of 66.6%.

Likewise, he has been more wasteful with his passing, with his pass completion rate decreasing from 78.7% to 72.9%.

But his figures for unsuccessful touches have actually improved (2.6 per 90 at Arsenal compared to 1.8 at United), as well as for the number of times he is dispossessed (3.6 to 2.8).

Alexis: "I'm a player that, if I'm not in contact with the ball, I lose that spark, and sometimes I want to play in every game. You're in, you're out, and I'm used to paying." #mulive [bbc]

His interceptions have also increased from 0.7 per 90 minutes to 0.9.

Comparing Marcus Rashford’s stats before and after Jose Mourinho