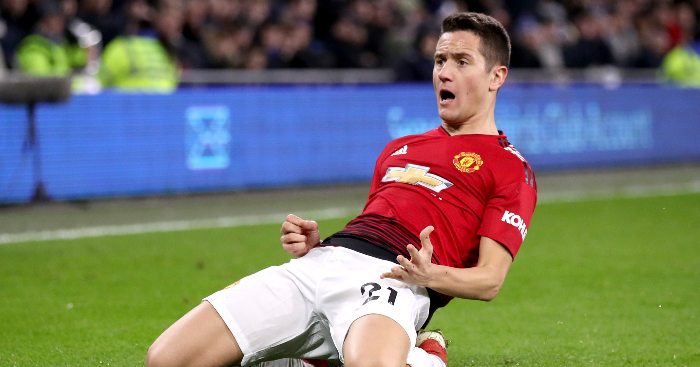 Ander Herrera wants to stay at Manchester United rather than join Paris Saint-Germain – and that news is sure to be welcomed by Ole Gunnar Solskjaer.

Herrera is out of contract at the end of the summer, with talks over a new deal so far coming to nothing, but both the midfielder and his manager are keen for him to remain at Old Trafford.

Herrera has scored twice and provided three assists from 19 Premier League appearances, averaging a goal every 607 minutes and an assist every 405 minutes.

Marouane Fellaini, who was deemed surplus to requirements by Solskjaer, scored one goal but didn’t provide any assists in 748 minutes before his mid-season move to China.

Fred, who with a £52million fee was expected to offer Herrera more competition in midfield, has clocked up just six minutes more than Fellaini did in the league; 754 in total. He’s scored once and is yet to provide an assist.

Andreas Perreira has played even fewer, just 389 minutes, but provided one goal and assist – both of which came in a 3-2 win over Southampton.

Of Ander Herrera’s 19 league appearances this season, United have won 12 and lost three. That’s 63% as a win percentage.

Playing most of his games during the Solskjaer renaissance, it’s no surprise that his win percentage is higher than United’s Premier League win percentage of 56% – with an increase of 7%, that’s a clear indication that they’re better when he plays.

Part of Herrera’s reputation comes from his dedication and tenacity, and the stats back it up – he averages more tackles and interceptions than the other central midfield options.

Herrera, perhaps surprisingly given his reputation as a sh*thouse, also commits fewer fouls than the other players in that position, or at least, he gets away with them more.

He averages 0.9 fouls per 90 minutes, whereas Fellaini averaged 1.1, Fred 1.3 and Perreira exactly one.

Just look at this from Herrera. A foul, pointing at the ball and appealing to the ref in one fluid movement. Other players can only dream of such natural shithousery… pic.twitter.com/cid3uIUDGv

Another area in which Herrera leads the pack is his passing – the stats demonstrate he’s their most adept ball-mover.