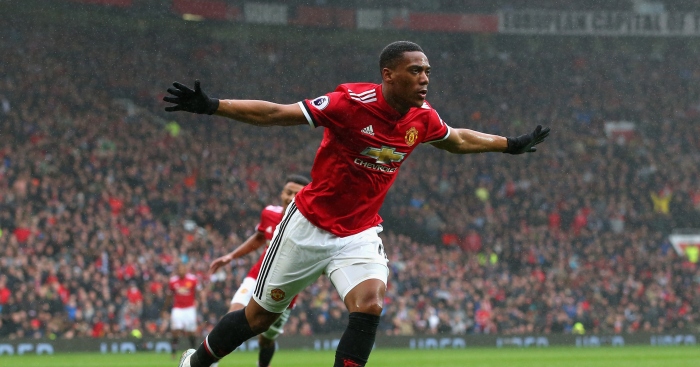 Anthony Martial grabbed the headlines after it was revealed he wants to leave Manchester United following a frustrating season under Jose Mourinho.

Martial’s agent Philippe Lamboley says “time has come” for the winger to move on after the player and the club could not agree on a new contract for the France international.

The forward moved to Old Trafford as a teenager in 2015 but started just 18 Premier League games last term, with appearances further limited following the January arrival of Alexis Sanchez.

We’ve taken a look at Martial’s 2017-18 Premier League stats in comparison to his rivals for a place in United’s starting XI – Jesse Lingard, Juan Mata, Marcus Rashford and Sanchez.

Scoring nine times in his 18 Premier League starts and 12 substitute appearances, Martial averaged 0.51 goals per 90 minutes in the 2017-18 campaign.

That is a much better average than any of the four players we have compared him to, with Lingard’s eight goals seeing him come in next at 0.39 goals per 90 minutes.

Despite playing fewer minutes than any, and scoring more goals, Martial also managed five assists in the Premier League, the same number as Lingard, Mata and Rashford.

This means he was directly involved in 0.80 goals per 90 minutes of Premier League action during last season, again a far higher rate than any of his team-mates.

Minutes per goal / assist in the Premier League this season:

Despite netting nine goals, Martial worked the goalkeeper just 16 times from 49 attempts in the Premier League last term, meaning he has the worst shot accuracy of the five with 32.6%, averaging 2.8 shots per 90 minutes.

Sanchez has the best accuracy, though he has suppressed his shooting since the move from Arsenal, taking 50 more shots in the first half of the campaign despite only making seven more appearances than he has for United.

The Chilean has hit the target with 47.4% of his shots in a United shirt, taking 1.6 per 90 minutes. Lingard comes next with an accuracy of 41.4% from 2.8 shots per 90 – averaging the same number of attempts as Martial.

Anthony Martial scored a goal once every 175.67 minutes in the Premier League in 2017/18; a better rate than any other Man Utd teammate to play at least 700 minutes.

Only January signing Sanchez betters that figure, averaging 3.8 successful dribbles per 90, with a 73.3% rate of success.

However, Martial was dispossessed an average of 3.1 times per 90 minutes, and also took 3.1 unsuccessful touches per 90 minutes in the Premier League last season, more than any of the other four.

Mata had the best ball retention rate of the quintet, also being dispossessed an average of 0.9 times per 90 minutes, while taking just 1.2 unsuccessful touches.

Philippe Lamboley (Martial's agent): “It is important to remember that this season he scored 11 goals and provided ten assists in five months. He was elected three times players of the month by the fans. Then came the January transfer window.” #mufc #mulive [RMC]

Of the five players, it is Lingard who completed the season with the best passing success rate of 87.8%, closely followed by Mata on 86.7%.

As could perhaps be expected, Mata created chances for team-mates on the most regular basis, playing 2.4 key passes per 90 minutes.

Sanchez averaged 2.2, while Martial created an average of 1.9 per 90 minutes in the Premier League last season.

Meanwhile, Lingard averaged 1.3 key passes per 90 minutes and Rashford just 1.1 throughout the 2017-18 campaign.

José holding him back imo ,man needs to leave

Despite impressing with their attacking prowess, Mourinho still expects a lot of his attackers in terms of defensive work-rate.

Sanchez makes the most successful tackles per 90 minutes, averaging 1.8 with a success rate of 47.7%, while also making the most interceptions at an average of 1.5 per 90 minutes.

Lingard has a better tackle success rate than the Chilean with 57.7%, but averages 1.5 successful tackles per 90 minutes and just 0.4 interceptions.

Martial in fact has the best success rate, winning 62.5% of his tackles, with 0.9 successful tackles per 90 minutes, though he made the fewest interceptions, averaging just 0.2 per 90.

Can you name every Manchester United goalscorer in 2017-18?