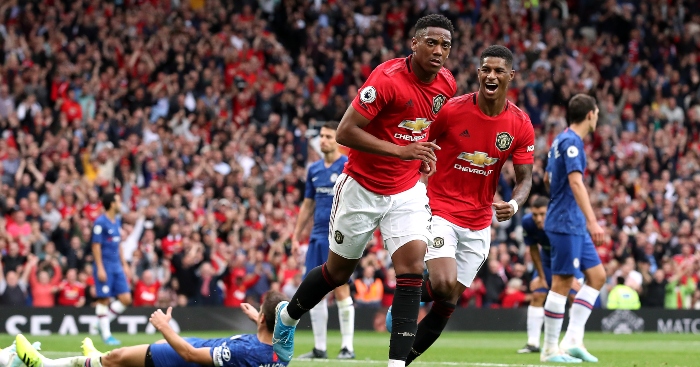 Anthony Martial started life back in Manchester United‘s No.9 shirt with a goal and a promising display as a centre-forward in the Red Devils’ 4-0 victory over Chelsea in their opening match of the Premier League season.

With Romelu Lukaku having been sold to Inter, Martial has reverted to the No.9 – in one of the most satisfying squad number changes of the summer – and was given first dibs to make the central striker role at Old Trafford his own as Marcus Rashford was deployed on the left wing.

Martial has often taken up that spot on the wing himself, and we’ve compared the France international’s record from the flank to when he is utilised as a centre-forward.

According to Transfermarkt, of the 175 appearances Martial has made for United, 109 have come from the left wing and a further 10 from the right.

As a left winger, Martial has scored 34 goals and provided 24 assists at a rate of a goal or assist every 130.3 minutes.

The 23-year-old’s most prolific season at Old Trafford – his debut campaign in 2015-16 – saw him play frequently from that role, scoring 11 of his 17 goals from the left wing.

As a right winger, Martial has scored twice but failed to provide a single assist in 10 matches – a record of a goal or assist every 319 minutes.

Interestingly, of the nine Premier League games Martial has played from the right, United have lost more than they have won (five defeats to two victories).

Overall as a winger, Martial’s record stands at 36 goals and 24 assists in 119 appearances, averaging a goal or assist every 136.6 minutes.

Anthony Martial has got his number 9. The first memory that comes to my mind when he wore that number is… pic.twitter.com/qODAPpUznx

In comparison, Martial has only played 45 times as a central striker, bagging 11 goals and seven assists in those appearances.

That averages out to a goal or assist every 152.1 minutes, which is still surprisingly less prolific than his record from the left wing.

However, while analysing United’s victory over Chelsea for Sky Sports, both Jose Mourinho and Gary Neville commented on why Ole Gunnar Solskjaer may prefer to use Martial as a centre-forward – namely the forward’s reluctance to contribute defensively.

“Of course, [Marcus] Rashford does too, but he adapts perfectly on the left side because he has more responsibility and a high working rate, coping with the progression of a possible full-back.”

Neville echoed those sentiments in commentary but did offer encouragement post-match following a positive display.

“Martial has not realised his potential on the left side for three or four years and Ole Gunnar Solskjaer is probably thinking he wants to play centre-forward, he’s a good finisher, I have to give him that chance,” he said.

“You could argue it’s to the detriment of Rashford, but if he can get his head around playing on the left and be comfortable and Martial can be a centre-forward then it’s worth giving him that chance.

“At Manchester United when there’s speculation around Martial leaving there’s been a big fear that he will go to another club and become one of the best players in the world because he has got that much talent.

“I think now is the time for Martial to deliver it. He is being given his chance as a centre-forward and scored a good goal today.”