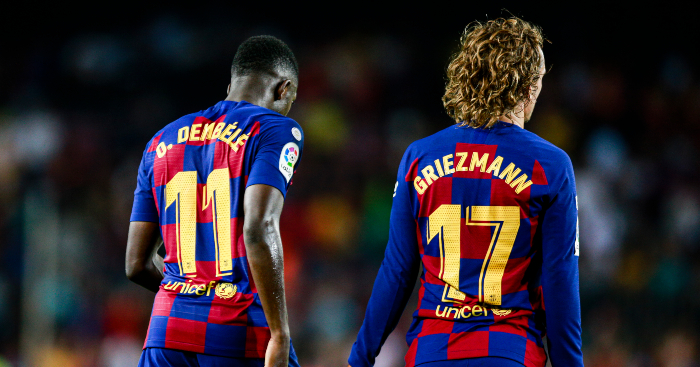 Things haven’t quite gone according to plan for Antoine Griezmann since he made his big money switch from Atlético Madrid to Barcelona.

The Frenchman scored twice on his home debut against Real Betis, but he’s still stuck on four for the season and has failed to score in four Champions League outings.

Ousmane Dembélé had a similarly slow start to life at Camp Nou after a big-money move, with injuries not helping, before showing some more positive signs last season. But how does Griezmann’s start compare to his compatriot’s first full season?

Dembélé scored 11 times in La Liga and the Champions League across the 2018-19 season – eight in the league plus European strikes against PSV, Tottenham and Lyon.

Those goals came at an average of one every 190 minutes, a rate which Griezmann is some way off matching.

The nine-figure signing has scored once every 284 minutes so far. He would need to score a hat-trick in Barça’s next game to surpass his colleague as things stand.

One might expect Dembélé’s position to lend itself more to creating than to scoring, but he only managed six assists last season at a rate of one every 348.3 minutes.

Griezmann has posted similar numbers of one assist every 379 minutes, or three in total. The mathematicians among you will have noticed that means he’s already played more than half as many league and Champions League minutes as his compatriot did last season.

While Dembélé’s dribbling stats being far ahead of Griezmann’s is to be expected, he also leads his team-mate on the key passes front.

The 22-year-old averaged 1.6 key passes per game last season in La Liga, with a slightly higher average of 1.9 in Europe.

Griezmann, meanwhile, is currently averaging less than one per game across his first 14 games. Just under 0.9 to be exact, with nine in 10 league games and three in four in the Champions League.

There have been some suggestions that Griezmann has failed to integrate into Barca’s squad to such an extent that his team-mates are failing to pass the ball to him as regularly as possible – with Lionel Messi apparently a particularly guilty culprit.

As a comparison, across his 2,090 La Liga and Champions League minutes last season, Dembélé recorded 1,656 touches: that equates to 71.3 touches for every 90 minutes played.

To date, Griezmann has recorded 652 touches in his 1,137 La Liga and Champions League minutes in 2019-20, averaging out to 51.62, which does suggest he is less involved than his alternative.