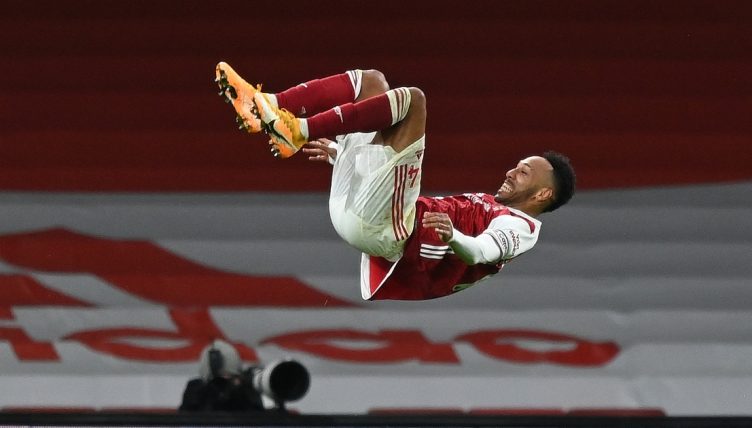 Pierre Emerick-Aubameyang stepped up once again to rescue Arsenal on Thursday night as his two goals helped see off Benfica in a thrilling Europa League round-of-32 tie.

A classy chip in the first half and an emphatic header late on, either side of a Keiran Tierney drive, left Benfica defeated 3-2 on the night and 4-3 on aggregate.

It has been a somewhat underwhelming season for the marksman so far. Throughout the 2019/20 campaign, he was on fire, netting 29 times in all competitions.

Prior to last night, he had only managed 11. But with a hat-trick against Leeds and a brace against Benfica over the last couple of weeks, there are signs that he is returning to his best.

With that will, inevitably, come comparisons to Arsenal’s greatest striker; Thierry Henry. So we may as well contribute to that narrative, right?

In his time with Arsenal, Henry found the net 228 times, breaking the club record in the process. But considering Aubameyang has only played a fraction of those games for the Gunners, would it really be fair to compare the two records as they come?

With that being the case, we have taken a look at how Henry’s record compared to Aubameyang’s at the same stage of his Arsenal career – 135 games in.

Aside from total assists, it is surprising to see just how closely the duo match across the remaining stats.

In fact, Aubameyang edges Henry on goals and minutes per goal. The Frenchman’s superior assists record could well be simplistically brushed away by mentioning the calibre of player he was passing to compared to Aubameyang.

Aubameyang, on the other hand, very much arrived in North London at the peak of his powers and is going to demonstrate some incredible longevity to get anywhere near Arsenal’s all-time top scorer.