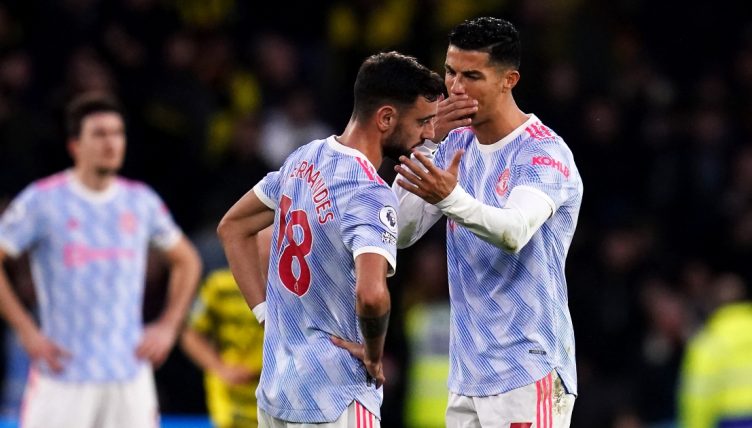 Cristiano Ronaldo and Bruno Fernandes are undoubtedly two of Manchester United’s best players – but can the Portuguese duo play well together?

Fernandes joined United in January 2020 and immediately established himself as their talisman, registering 40 goals and 25 assists in his first one-and-a-half seasons as Old Trafford.

Ronaldo then made his dream return to United in the summer of 2021 and scored a brace against Newcastle on his second debut.

“Of course, that was never in doubt,” Fernandes said after that game when asked if he and Ronaldo could play together.

“Good players can be put together and always play well. Some days you can play well, some other days no. But it is not because one is closing the space of another. It’s because football is like that sometimes.

“Everyone knows what Cristiano Ronaldo brought for the club and we are really happy to have him. The most important, as he will say, is the result for the team. Good players can always play well together.”

But while the Portuguese duo have been on the pitch together, it has often felt like Fernandes has struggled to shine and impact things like he was previously doing.

After Fernandes appeared to give Ronaldo the cold shoulder at the Portugal training camp, a fallout between the pair was hinted at, but such rumours have since been squashed.

“I didn’t read the interview so I’m okay with that,” Fernandes told Sky Sports talking about Ronaldo’s interview with Piers Morgan.

Bruno Fernandes says he has ‘no problem’ with Cristiano Ronaldo and explains the apparent ‘frosty’ reception he gave his teammate earlier in the week 🔊pic.twitter.com/J9AA9P6RjI

“We have to be focused on the World Cup because a World Cup doesn’t come every time. You don’t have a chance to play a World Cup many times.

“Cristiano will play in his fifth World Cup so everyone is ready for that and everyone wants to give their best for the team.”

We’ve taken a look at Fernandes’ Premier League record in 2022-23 when he’s playing alongside Ronaldo and compared it to his stats when Ronaldo isn’t playing.

When they are on the pitch together

Official: Cristiano Ronaldo's goal against Tottenham has been voted as #mufc October Goal of the Month 🚀 pic.twitter.com/rg9k7miD33

When only Fernandes is on the pitch

READ MORE: Ranking every Man Utd player by how much they earn in 2022-23