How Chelsea results compare depending on who plays in midfield 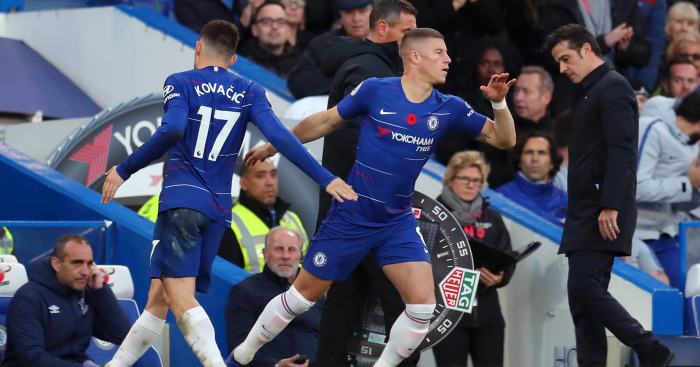 Maurizio Sarri is a manager who knows what he likes. To paraphrase another managerial mastermind, Mike Bassett: ladies and gentlemen, Chelsea will be playing four-three-f*cking-three.

Sarri’s belief in the system is so fundamental that within weeks you could already map his Chelsea team directly onto his former Napoli side, with different players carrying out the same functions within the XI.

Here’s how Sarri’s midfield is shaping up in west London – and the stats behind each trio.

Jorginho made the switch from Napoli along with the manager in the summer. The Brazilian-Italian is fundamental to how the team plays its football, with his range of passing and composure on the ball the key.

Using Jorginho as a deep-lying orchestrator is such a foundation of Sarri’s football that N’Golo Kante, who was previously considered perfection as he won back-to-back titles with Leicester City and Chelsea as a tenacious ball-winner, has been asked – to plenty of raised eyebrows – to adapt to a new role that demands more forward passing and creativity in possession.

The decision came under criticism as Kante struggled in Chelsea’s first loss of the season, the 3-1 defeat at Tottenham, but could be argued to be vindicated as he burst forward to provide the opening assist in the next game against Fulham. The following week he arrived to convert Eden Hazard’s cutback against Manchester City.

Whatever the positives and negatives, Sarri has made up his mind. Like the 4-3-3 formation, like Marek Hamsik and Allan at Napoli, the Italian manager is certain of who will play.

Kante and Jorginho have started 15 of 16 league games together this season, leaving one place in the midfield still up for grabs.

With the exception of the midweek match against Wolves, which was used as an opportunity to rest and rotate, Sarri has deviated between two players for the third place in midfield, choosing between Ross Barkley or Mateo Kovacic.

The Croatian left Real Madrid on loan in search of more guaranteed minutes and has started 10 Premier League fixtures. Barkley has started five.

Kovacic has yet to complete 90 minutes in the league this season though and is almost always substituted off for Barkley, and vice versa: the former Everton man has only played a full Premier League match twice this season.

Twelve of 16 Premier League matches so far have featured both of them on at different points.

Chelsea have a 100% win ratio when Barkley starts this season, with five wins out of five. But he’s usually been used in the easier games – four of those wins came against teams in the bottom five (Southampton, Burnley, Crystal Palace and Huddersfield), as well as Arsenal, back in August before Kovacic had been integrated.

That said, the above figures also don’t account for pertinent in-game contexts: for example, Barkley scoring the equaliser against Manchester United after he’d come on for Kovacic. Or, conversely, when Barkley was substituted off against Crystal Palace at 1-1, before the final score finished 3-1 after Kovacic’s introduction on the hour mark.

Barkley has three goals and three assists in the league so far this season, while Kovacic is yet to score for Chelsea. Kovacic averages 70 successful passes per 90 to Barkley’s 66.

Barkley has only started Europa League games over the last two months, emphasising the pecking order.

After impressing for Crystal Palace last season and at the World Cup with England, much has been made of Ruben Loftus-Cheek’s ability and lack of first-team football at Chelsea.

With Chelsea playing in four competitions, there are opportunities for Loftus-Cheek this term, especially in the Europa League, in which he’s played five full games. He’s already clocked up more minutes this season at Chelsea than any other campaign for them.

With a hat-trick in the Europa League against BATE, and three more goals in the league, he can clearly be of use – but regular league starts are still unlikely. He’s only started in the Premier League once this season, in the shock 2-1 defeat at Wolves.

Cesc Fabregas was influential in the title wins under Jose Mourinho and Antonio Conte, but it looks like he’ll have to settle for being o the periphery now.

The 31-year-old doesn’t appear to have the mobility demanded by Sarri; he’s played fewer than 150 minutes in the league this season, and made just one start.

With only one place available in midfield, and Kovacic, Barkley and Loftus-Cheek ahead of him in the pecking order, a move away could benefit all parties. Especially if the Spaniard wants to play regular football again.