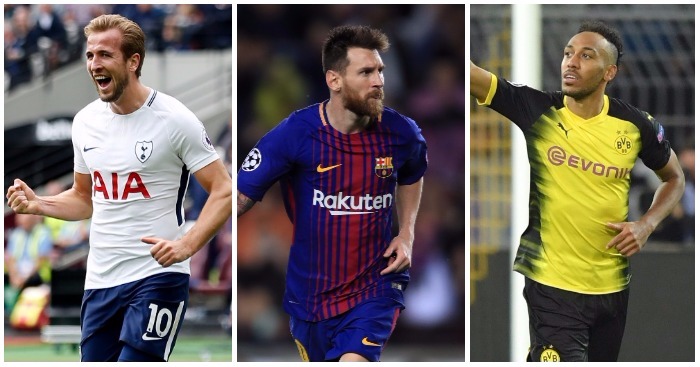 Harry Kane, Sergio Aguero and Romelu Lukaku are the top three Premier League goalscorers so far this season – but how do their conversion rates compare to the continent’s other top marksmen?

Despite enduring another drought in August, Kane has quickly shot to the top of the list of the Premier League’s top goalscorers having scored eight in his last six games.

However, he is still five behind Radamel Falcao and Ciro Immobile, who have each scored 13 in their domestic leagues, and has needed an incredible 57 shots to register his eight goals, giving him a conversion rate of just 14%.

But where is he taking his shots from? And how does that conversion rate compare to the rest of Europe’s top goalscorers? Here, we’ve compared the stats of the leading five goalscorers in England, Spain, Germany, Italy and France’s top divisions… 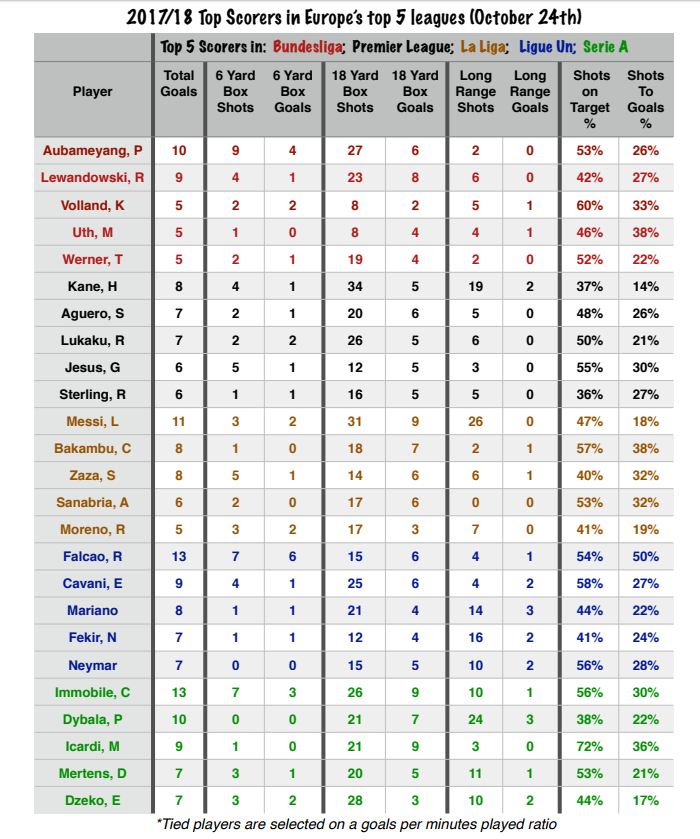 – Shoot for success: The leading goalscorer in each league has also taken the first or second most shots, apart from Ligue 1 in which Florian Thauvin leads the shooting charts.

– Premier League: Remarkably, Harry Kane has the lowest conversion rate of all 20 strikers featured. Manchester City’s dominant start to the season is highlighted by three of their players featuring in the top five.

– La Liga: It looks like there is a weakness in Messi’s game after all, as the diminutive Argentine has taken 26 shots from distance without success, taking his overall conversion rate down to a below average 18%. If only he could beat a player and get closer to goal before shooting…

– Bundesliga: The Bundesliga golden boot looks likely to be contested between the usual suspects again, with Dortmund’s Pierre-Emerick Aubameyang and Bayern’s Robert Lewandowski already well ahead of the chasing pack.

– Ligue 1: Radamal Falcao has scored from exactly 50% of his shots so far this season, giving him the leading conversion rate of all of our strikers. Incredibly, only one of his shots that have hit the target has failed to find the back of the net.

With Ligue 1 leading the other leagues by a large margin in terms of goals scored from distance, it could indicate the goalkeeping quality in France is a weakness Falcao has been happily exploiting.

Serie A: Inter’s Mauro Icardi has hit the target with an outstanding 72% of his 25 shots, the best ratio of the 20 strikers. Paolo Dybala, meanwhile, has taken 45 shots for Juventus but not a single one from inside the six-yard box, making him the only player in double figures for goals without a shot taken up close. 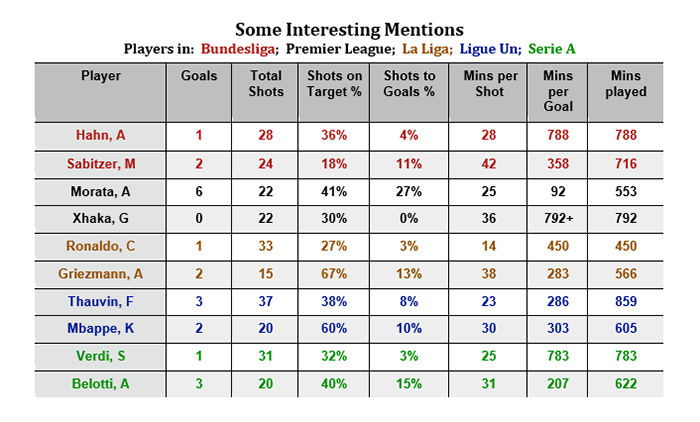 – Arsenal’s Granit Xhaka leads the way in the Premier league for long-range shooting, with 20 of his 22 shots being taken from distance, but unlike Harry Kane (in second place with 19) he is yet to score from any of those attempts.

– Cristiano Ronaldo has returned for Real Madrid with just one goal in five matches, however as he is taking a shot every 14 minutes, you can expect him to climb the scoring charts soon. His 3% conversion rate is unlikely to remain so low.

– Andre Hahn of Hamburger SV stands in third place in the Bundesliga for total shots taken, behind only Aubameyang and Lewandowski, but he has only one goal to show for his 28 attempts. Marcel Sabitzer, meanwhile, leads the way for shots taken outside the box with 14 out of his 24 total attempts taken from distance, but only one of his two goals were scored this way.

– Simone Verdi of Bologna trails only Paolo Dybala in Serie A for the most shots from outside the box, with 22 of his 31 shots taken from distance, but they’ve resulted in only one goal and a 3% conversion rate.

– Florian Thauvin is the leading shot taker in Ligue 1 with 37 for Marseille, converting just 8%, whilst Kylian Mbappe appears to be taking time to settle in at PSG with a shots-to-goals conversion rate of just 10% despite hitting the target 60% of the time.

England: Nathan Redmond of Southampton is yet to score after 24 attempts.

Spain: Levante’s Alex Alegria, ’leads’ in Spain with 16 shots but no goals.

Germany: Jhon Cordoba of FC Cologne gets his second monthly award with 25 shots, no goals.

France: Angel Di Maria has taken 20 shots in Ligue 1 for PSG but is yet to score. He didn’t take our advice from last month to stop shooting and cross the ball for Cavani and Neymar instead.

– Tom Ince of Huddersfield just missed out on a second monthly award and sits second in the Premier League with 23 shots, no goals.

– In La Liga, Ronaldo’s late winning goal against Getafe just over a week ago just saved him from featuring in this month’s ‘Keep Trying’ table.

– Mijat Gacinovic of Eintract Frankfurt has had the most shots on target in the Bundesliga without scoring, with nine of his 19 attempts hitting the target.

– In Italy, Domenico Berardi of Sassuolo has only one goal to show for his 31 shots, 12 of which hit the target.

– Monaco’s Thomas Lemar has been linked with a transfer, but his stats so far read 17 shots, zero goals, and only three shots on target.

Who your team has scored the most Premier League goals against