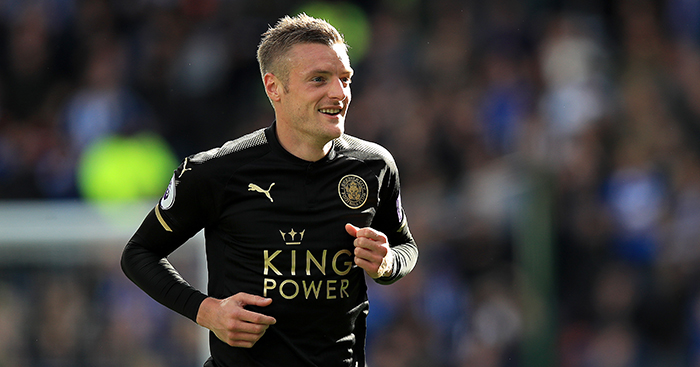 Romelu Lukaku and Sergio Aguero are the top two scorers in the Premier League, but how do their stats so far this season compare to the leading marksmen in Europe’s other four major leagues?

The amount of goals a striker scores is undoubtedly still the best way to judge their effectiveness, but the most regular goalscorer isn’t necessarily the most effective goalscorer.

After all, a player could take 80% of his chances leading the line for a mid-table club but still score less over a season than the centre-forward of a top-of-the-table outfit who converts only 25% of his opportunities but gets significantly more presented to him.

The ability to get into goalscoring positions is a skill in itself, of course, but at least equally important is how clinical a striker is in such situations. How many shots on goal do they actually need to find the back of the net?

This season, we’ll assess the stats for the top five goal scorers in England, Spain, Germany, France and Italy once a month to see who’s hot, and who’s not. 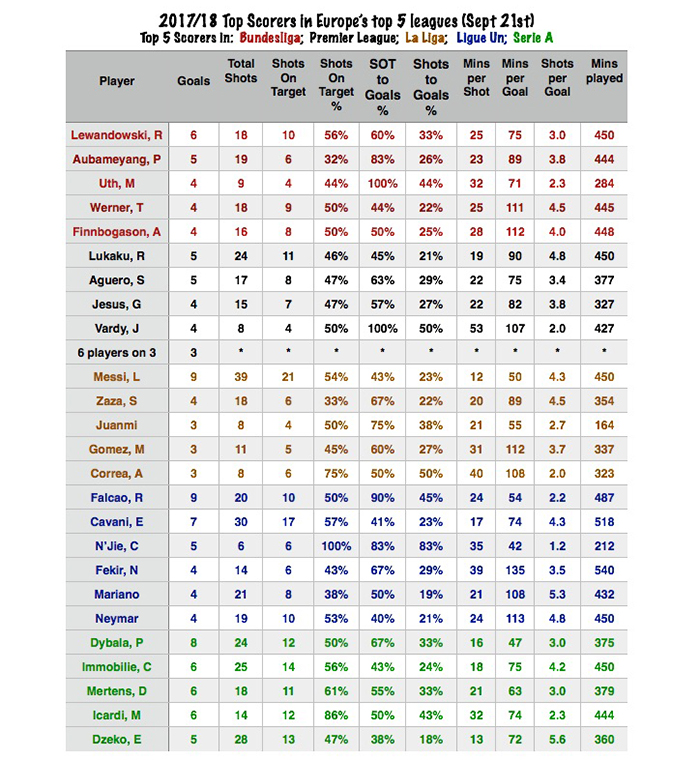 – Most of the usual suspects are off to good starts, but we can expect Pierre-Emerick Aubameyang, Mark Uth, Radamal Falcao, Clinton N’Jie, and Jamie Vardy’s numbers to level out a little as their shots on target to goals ratio of over 80% is unsustainable over a season.

– Shoot and shoot often seems to be the way to go, with the players that shoot most often dominating the top two spots in England, Germany and Spain. In France, Neymar Jr and Edinson Cavani are combining to take a shot every 12 minutes between them for PSG, while Edin Dzeko’s outstanding average of seven shots per match for Roma in Italy is bettered only by Lionel Messi across Europe.

– Manchester United’s £75 million investment in Romelu Lukaku is starting to pay off with the Belgian striker sitting atop the scoring charts and managing a shot every 19 minutes, a full 10 minutes quicker than during his last season with Everton (29 mins per shot in 2016/17).

– The Manchester City duo of Sergio Agureo and Gabriel Jesus look like a real Master and Apprentice pairing, with their stats so far remarkably similar.

– Nobody has worked out how to stop Lionel Messi shooting. The Argentine tops the shooting charts with 39 taken so far in five games. We expect that particular trend to continue as he averaged a shot every 16 minutes last season, a figure only matched throughout Europe’s top leagues by the soon-to-return Cristiano Ronaldo.

– Borussia Dortmund’s Patrick Aubameyang is the least accurate of all the featured European strikers when it comes to working the goalkeeper with a shots-on-target percentage of only 32%.

– The goals to shots on target percentage in France looks unsustainable for the early leaders, with three of their top four scoring two thirds of the time they hit the target. Either that or the Ligue Un goalkeeping situation needs attention.

– Italy’s traditionally defensive image may need revisiting. In fact, Serie A is the most exciting league, with four of their top five scorers shooting every 21 minutes or less, which translates into the Serie A top strikers scoring quicker and more often than in any other league. 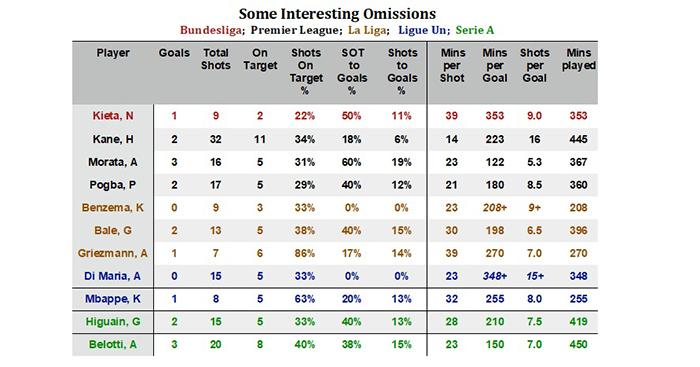 – Tottenham Hotspur’s Harry Kane, the Premier League’s Golden Boot winner last season, is struggling with an average of 16 shots per goal scored this season, way above his 2016/17 season average of 3.8 shots per goal. Luckily he shoots every 14 minutes so is sure to climb the charts soon.

– The Real Madrid fans that have booed Gareth Bale recently may point to the fact that the Welshman misses the target twice as often as he hits it as evidence he deserves a kick up the backside.

– Angel Di Maria should stick to crossing the ball to Neymar…and Edinson Cavani, of course.

The most profligate players

Germany: Jhon Cordoba of FC Cologne with 22 shots, no goals.

England: Tom Ince of Huddersfield Town with 19 shots, no goals.

Spain: Iago Aspas of Celta Vigo with just one of his 13 shots on target and zero goals.

Italy: Massimo Coda of newly-promoted Benevento has the best shots on target accuracy of our not-so-deadly five but still has no goals to show for his 23 attempts.

These guys shouldn’t lose too much heart, with star names like PSG’s Angel Di Maria (15 shots, no goals) and Real’s Karim Benzema (9 shots, no goals) close behind them in the zero goals stakes.