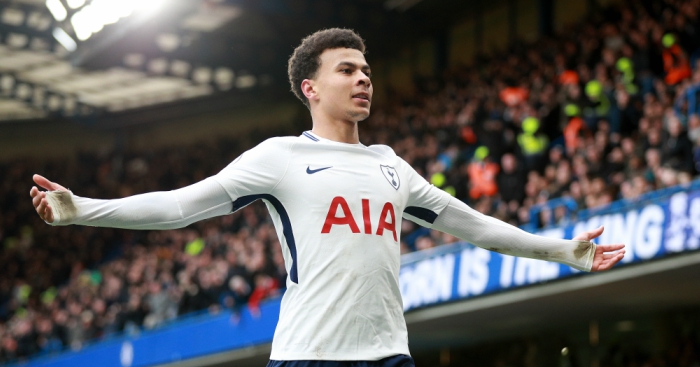 Tottenham midfielder Dele Alli burst back to life with two goals as his side defeated Chelsea at Stamford Bridge.

The 21-year-old has come under criticism of late and made only one late substitute in England’s recent friendlies ahead of this summer’s World Cup.

But with Jesse Lingard primed and ready to snatch a place in Gareth Southgate’s starting XI right from under Alli’s nose, the former MK Dons man answered his critics in perfect fashion.

He put in a man of the match performance as Spurs ended their 28-year wait for a league win at Stamford Bridge, coming from behind to win 3-1.

With Alli bouncing back, and still at the tender age of 21, we decided to compare his stats to other youngsters from Europe’s top five leagues.

Alli has now netted eight Premier League goals this season, the second highest for an under-21 player in the Premier League, but still some 10 off his impressive tally last term.

Gabriel Jesus’ goal against Everton took him to nine for the current campaign, with Marcus Rashford (6) and Richarlison the only other under-21s to net five or more this season.

In Spain, however, Celta Vigo’s 21-year-old striker Maxi Gomez has grabbed 13 goals this term, though he has spent all season playing as an out-and-out front man.

PSG’s Kylian Mbappe (13), Bordeaux man Malcom (9) and Bayer Leverkusen winger Leon Bailey (9) are the only other under-21s in Europe’s top five leagues to net more than Alli, who would be top of the under-21 scoring charts in Italy, with Patrick Crutone coming closest with seven.

Alli is one of just 13 players aged 21 or under to score more than five goals in Europe’s top five leagues this season.

They dared to question if the kid shows up in big games, he is at it again!#THFC #COYSpic.twitter.com/MSbY29b2ut

Alli has claimed a decent haul of nine assists this season, with four more in just five Champions League appearances too.

There’s no-one under-21 in Europe with more assists than the former MK Dons man, the closest to him being Mbappe on eight, and Valencia’s Goncalo Guedes who has created seven La Liga goals.

In the Premier League, the nearest any other youngster can get is Dominic Calvert-Lewin’s six, an achievement matched by just four other players aged 21 and under.

This means only Mbappe has directly contributed to more league goals than Alli, and the PSG man lines up alongside the likes of Neymar and Edinson Cavani week after week.

It is understandable why so many clubs are chasing the talents of Malcom – as well as the 21-year-old’s nine goals and six assists, he has created 69 chances in the league so far this season, more than any other under-21 in Europe.

Alli, however, is second in the list, having created an impressive 60 chances in the Premier League this term – averaging two a game.

Nobody under-21 in the Premier League comes close, with Richarlison second having created 26 chances this season, followed by Alex Iwobi on 25 – from half the amount of minutes Alli has played.

Only three other youngsters have created more than 40 chances this season in Mbappe (44), Bailey (45) and his Leverkusen team-mate Julian Brandt (49).

When averaged out into chances created per 90 minutes, the aforementioned trio all find themselves ahead of Alli, having played less minutes.

Malcom is way out in front with 2.7 chances created per 90 minutes, followed by Brandt on 2.4 and Bailey and Mbappe on 2.3.

Am I the only one who thinks Southgate has played this brilliantly?

Look at the response from Dele Alli after the England snub. Amazing today.

Southgate would have been watching that with a huge grin on his face!

When it comes to dribbling, Alli finds himself quite significantly behind many European under-21s, in both number of successful dribbles and his success rate. It is clearly not a strength of his.

In fact, Alli’s success rate of 40.4% is the worst of any under-21 to complete more dribbles than him, even worse than the much-publicised poor ratio of Borussia Dortmund’s Christian Pulisic, who has a 42% dribble success rate.

The Tottenham midfielder has completed 36 successful dribbles so far this season, with 22 under-21s across Europe’s top five leagues making more than him so far this term.

Malcom once again comes out on top, with 80 successful dribbles in Ligue 1, with a 65.6% success rate.

Fellow familiar names are also among the top dribblers, with Mbappe completing 73, successful 59.8% of the time, while Bailey has completed 49 with a success rate of 54.4%.