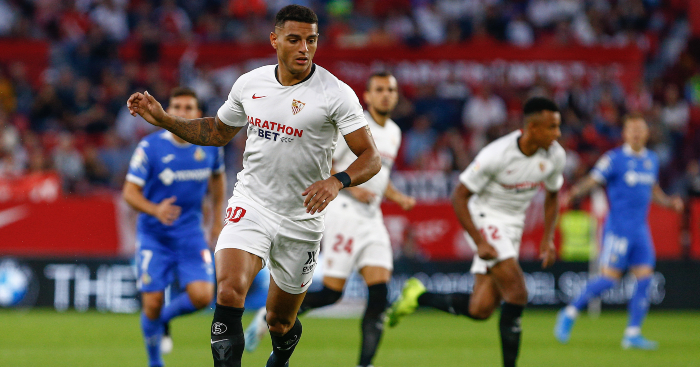 Reports in Spain have linked Liverpool with a move for Sevilla centre-back Diego Carlos in January.

Real Madrid have also been linked with Carlos, 26, while Liverpool appear well-stocked in this area of the field.

As we often say in these stats comparisons, a player making a high number of tackles is not always a positive. As Paolo Maldini once said: “If I have to make a tackle then I have already made a mistake.” Such figures can also be skewed depending on how much a team spends defending or on the front foot.

Carlos averages 1.3 successful tackles per 90 minutes in La Liga, the same number as Lovren and a similar figure to Gomez and Matip (both 1.7). Van Dijk makes notably fewer with 0.7.

Van Dijk’s lowest figure comes at the highest success rate, completing 87.5% of his attempted tackles. Carlos is the second most impressive in this respect, completing 81.25%, followed by Gomez (80.95%). Lovren’s is significantly lower at 68.4%, with Matip’s 62.96%.

While centre-backs are judged first and foremost on their defending, they increasingly need to be comfortable on the ball, especially in a team so dominant as Liverpool.

Offering a threat in the opposition penalty area from set-pieces is always a useful bonus for a centre-back, and Carlos has scored twice in La Liga this season, with both goals coming in December.

Van Dijk is the only Liverpool centre-back to better that tally of league goals with three, while Matip has scored once in the Premier League this term.

Gomez and Lovren have failed to score to date, although Lovren is the only member of the quintet to have registered an assist in 2019-20.