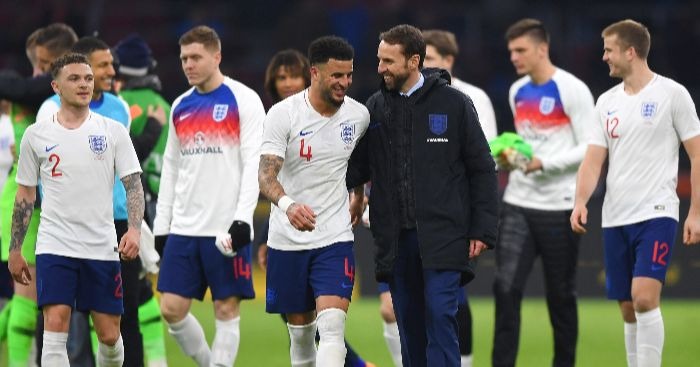 Gareth Southgate caused a few surprises with his England squad for the 2018 World Cup by dropping Jack Wilshere and including Trent Alexander-Arnold – but has he got the balance of his 23-man party right?

Frank Lampard, Steven Gerrard and Rio Ferdinand have suggested England are hampered by their top stars competing against each other in the Premier League.

Speaking to COPA90 in November, Lampard cited a lack of squad integration as a “real negative of the England squad” during his time representing the Three Lions.

“I stayed with John (Terry), Wayne Bridge, Shaun Wright-Phillips, Joe Cole; you were set in your ways,” he said. “We came in our little groups, we played a game, and then went away again.”

Conversely, Ferdinand revealed in an interview with BBC’s NFL show that he and Lampard stopped talking after ending up at rival clubs in Manchester United and Chelsea, despite the fact they had come through the ranks together at West Ham.

“We never spoke about it, we just stopped talking,” he said. “We didn’t hate each other, but I didn’t want to give him anything that he might take back to Chelsea.”

The pair were quizzed about it alongside Gerrard on BT Sport earlier this season, with all three suggesting the rivalry of the clubs they played for prevented the sort of squad harmony perhaps needed for the so-called Golden Generation to have achieved the success expected of them.

Gerrard said there was “more of a respect than a bond” among the players, adding: “When I spoke to other international players, Coutinho for example, they can’t wait to go away with Brazil. It’s the best 10 days of their season.

“You didn’t really get that feeling with England. You looked forward to the games, but (not) everything else around the games.”

Gerrard, like Lampard, suggested having so many of England’s players in the same division worked against them.

He said: “A lot of other nations have players playing all over the world and then they come back together and they don’t have that competition – every week we were at each other.”

The question is, do the former England stars have a point?

Most was expected of England at Euro 2004 and the 2006 World Cup when Sven Goran Eriksson’s squads were made up of players from 10 clubs and 13 clubs respectively.

Aside from David Beckham at Real Madrid and Bayern Munich’s Owen Hargreaves, the remainder of the players in the squads for both tournaments were Premier League based.

However, Spain won the World Cup and two European Championships with squads made up of from just two leagues, while every single member of Italy’s 2006 World Cup-winning squad was based in Serie A. Being “at each other” every week didn’t affect their performance.

Indeed, in the four seasons between Spain’s two European Championship triumphs, which sandwiched their World Cup victory, Barcelona and Real Madrid went into battle with each other 15 times – once more than Liverpool clashed with Chelsea between the World Cups in 2002 and 2006.

Despite the vast majority of the national squad being made up of players from those two clubs, the Clasico rivalry and their annual La Liga title race certainly didn’t harm La Roja.

Watch: Frank Lampard’s fascinating thoughts on why his England failed