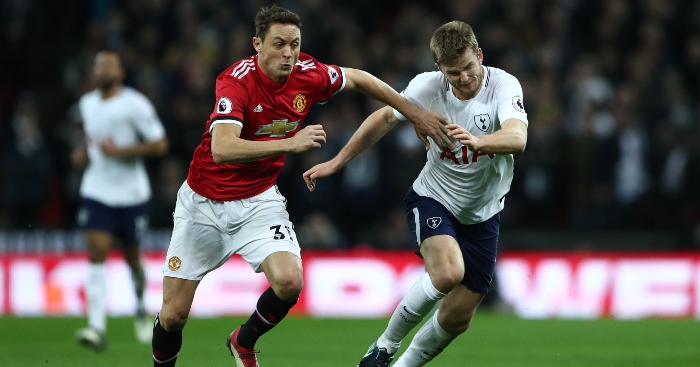 Manchester United have been linked with a seemingly endless list of players so far in the summer window, with Eric Dier being the latest they’re said to be looking at.

It’s no secret that Ole Gunnar Solskjær wants an overhaul after the dismal end to last season, and the midfield is an area which he’s definitely looking to tackle after the departure of Ander Herrera, the continuous uncertainty of Paul Pogba’s future and the doubts over Nemanja Matić.

We’ve compared Dier’s 2018-19 stats with United’s current defensive midfielder Matić as well as Declan Rice, who has been on Solskjær’s radar, but the Norweigan has reportedly now accepted that the move is unlikely to happen.

All three play a very similar role for their respective clubs in the heart of midfield, and so tackles and interceptions are a key part of their game.

Rice’s ability to read the game is quite remarkable for a 20-year-old and that’s one thing Gareth Southgate has praised the youngster for. He leads the way for interceptions, making 1.6 every 90 minutes compared to Dier’s 1.3 and Matić’s 1.1.

If it’s a bit of bite Manchester United are after then there seems to be one clear winner with Rice also well on top for successful tackles per 90 mins.

The English midfielder averaged an impressive 2.9 tackles which is far superior to that of Dier and Matić who managed just 1.5 and 1.8.

It should be said, though, that Rice probably had more defensive work to do in West Ham’s midfield than Dier and Matić did with their clubs.

Tottenham are a team who enjoy some patient build-up play and Dier, often playing as their deepest midfielder, is tasked with spraying the ball off to his centre-halves and full-backs.

That certainly shows in his passing stats as 92% of his attempted passes are short balls. However, compared to Rice and Matić, Dier actually sits bottom of the pile for pass completion rate – but only by a matter of 1.4%.

Dier’s passing last season was certainly nothing to be frowned upon, as he achieved an 85% success rate. He was bettered by Rice on 86.4%, despite averaging almost 20 passes less than Dier per 90 minutes, but it was actually Matić who topped the lot on 86.9%.

Matić may have impressed with his passing, but for a central midfielder he’s caught on the ball far too often, leaving United vulnerable to attacks.

He was dispossessed, on average, 1.4 times per 90 minutes last season which, when compared to Dier’s 0.5 and Rice’s 0.6, is a mammoth figure.

Rice, still at the age of 20, seems to be the clear winner on paper, but with West Ham desperately trying to hold on to a possible future captain, it’s more likely we’ll see Dier in the red of United.