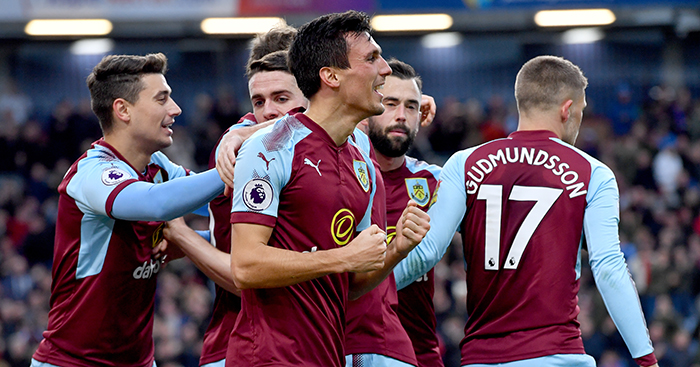 Premier League teams may briefly take stock of their achievements so far this season on Christmas Day – and those associated with Manchester City, Burnley, Manchester United and Leicester City can feel particularly proud of themselves.

Manchester City are leading the way by an astonishing 13 points at the halfway point, the exact same amount of extra points they have won this season compared to last. After 19 games of Pep Guardiola’s first year in charge, they weren’t even in the top four.

That is unsurprisingly the biggest improvement of any team, and the Blues are one of only four teams to have both more points in total and, perhaps more crucially, more points than they managed in the same fixtures last season.

Manchester United have got six more points than they had at this stage in 2016-17, but more importantly they have picked up 11 more points from the corresponding fixtures.

It looks highly unlikely they will win the title this season, but there is no doubt the Red Devils have improved considerably under Jose Mourinho this campaign. 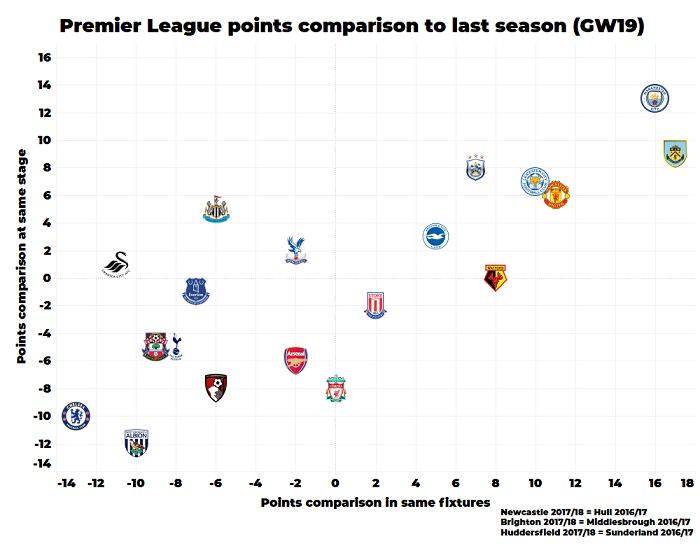 In terms of improvement from the same fixtures, Burnley have been the most impressive, picking up some 17 more than they managed last term. This is mostly due to their upturn in form away from Turf Moor, especially against the big boys earlier on in the season.

Leicester City are the other team to have improved their records in both regards, largely thanks to their form since the appointment of Claude Puel. The Foxes now have seven more points after 19 games than they managed last season and are 10 points ahead in the same fixtures.

Despite being bottom, Swansea actually have more points at this stage, albeit with a significantly worse record from the same fixtures, while Crystal Palace are also ahead of where they were after 19 games last season.

Watford have got the exact same amount of points but have taken eight more than they managed in the same fixtures last season, while Stoke City are actually two points ahead in the fixtures comparison despite posting their worst ever Premier League points tally from 19 games.

Huddersfield, Newcastle United and Brighton, meanwhile, have been performing much better than the three teams they replaced.

Chelsea have had the biggest decline from the same set of fixtures, with the draw at Everton on Saturday meaning they’ve picked up 13 points less this time round.

The Blues also have 10 points less than at this stage last season, when they were six points clear at the top of the table.

West Brom have suffered the biggest decline in terms of overall points won having picked up 12 fewer than they had after 19 games of last season, while the Baggies are 10 points down on points won in the same fixtures.

Southampton and West Ham are both five points down on last season and nine points down from the same games, while Tottenham, Everton, Bournemouth and Arsenal are also down in both regards.