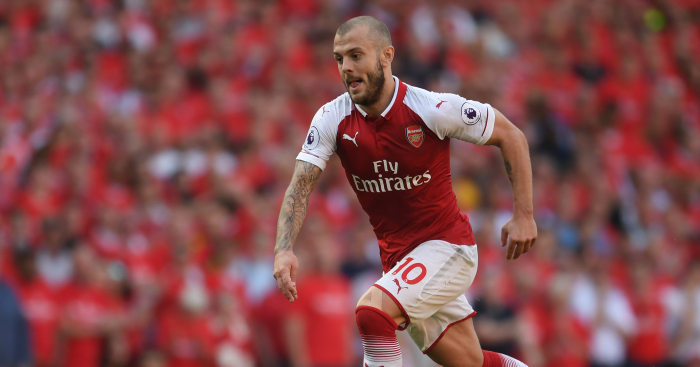 Jack Wilshere has confirmed he will end a 17-year association with Arsenal when his contract expires at the end of June.

After a number of injury-hit seasons, Wilshere made 38 appearances in all competitions last term but will leave the Emirates this summer in search of guaranteed first-team football after Unai Emery replaced Arsene Wenger as Gunners manager.

We’ve taken a look at the 26-year-old’s Premier League stats from 2017-18 and compared them to his rivals in Arsenal’s central midfield – Aaron Ramsey, Granit Xhaka and Mohamed Elneny – to see whether it is the right decision for both parties.

Wilshere has never been a prolific goalscorer throughout his career, and managed just one in the Premier League last term – six fewer than Ramsey, albeit level with Xhaka and one more than Elneny.

Unsurprisingly, Ramsey was directly involved in a goal most often, providing a goal or assist every 102.66 minutes. Wilshere has the next best record with one every 297 minutes, followed by Xhaka (408.25) and Elneny (870).

Looking at the quartet’s attacking play in more detail, Wilshere and Xhaka are level with 1.1 chances created per 90 minutes, while Elneny is just behind with 1.0. Yet again, Ramsey leads the way with 1.4.

Elneny boasted the best passing accuracy in the entire Arsenal squad with 93.7%. There is little again between Xhaka (86.9%) and Wilshere (86.4%), with Ramsey slightly behind on 84.9%.

This is the 1st picture I took of @JackWilshere 15 years ago at the Arsenal Academy. Since then we’ve shared so many brilliant moments on and off the pitch. Thank you for everything Jack, it’s been an absolute pleasure. #JW10 pic.twitter.com/MWfsaMTAbU

In comparison, Wilshere has the worst stats when it comes to tackles per 90 minutes, completing the fewest (1.1), at the worst success rate (47.8%).

Xhaka leads the way by completing the most with 2.1, but his success rate of 63.6% is bettered by Elneny’s 70.6%, although the Egyptian completes only slightly more than Wilshere with 1.2. Ramsey, meanwhile, completes 1.7 at 48.6%.

Wilshere also finishes bottom of the pile with 0.6 interceptions per 90 minutes. Xhaka and Elneny both average 1.0, while Ramsey leads the way with 1.2.

Despite his slight frame, Wilshere’s aerial duel stats are better than you might expect. Xhaka wins by far the most with an average of 1.4 per 90 minutes, but he shares the best success rate (50%) with Wilshere.